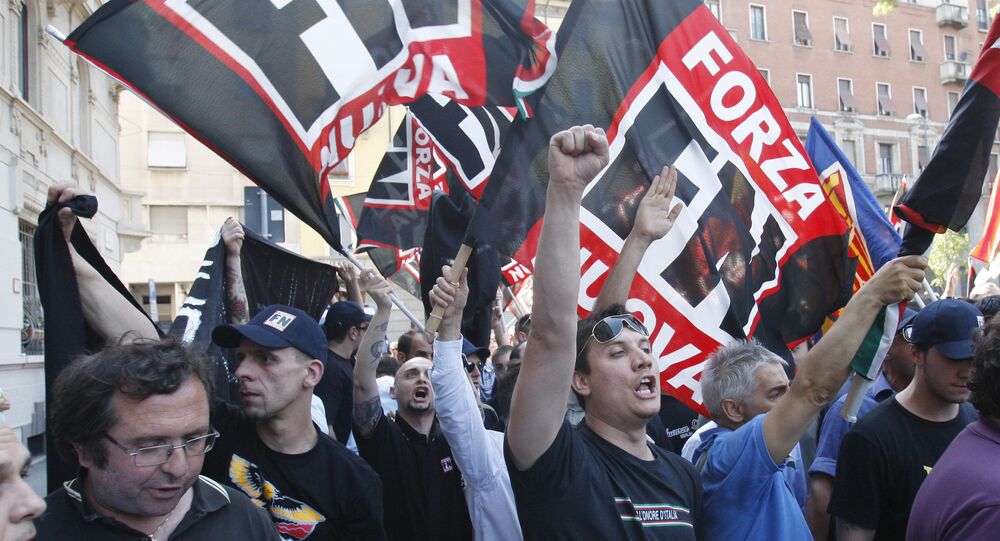 A number of Italian politicians called on the country's Interior Ministry to prohibit the forthcoming "March of Patriots,” scheduled for October 28.

ROME (Sputnik) — A number of Italian politicians called on the country's Interior Ministry to prohibit the so-called March of Patriots, scheduled by Italy's New Force (Forza Nuova) far-right party for October 28 to mark the 95th anniversary of Benito Mussolini's coming to power.

Despite the fact that Forza Nuova has not yet applied to Rome's police department for permission to hold a march, their plans have raised severe criticism from left-wing and center-left parties. A group of 45 parliament members from the ruling Democratic Party wrote a letter to the Italian Interior Minister Marco Minniti asking him to cancel the march.

"What urgent actions does the ministry intend to take to prevent this event from happening? It's a so-called 'march of patriots', which calls on 'comrades' from every part of Italy to unite and march on Rome 'against the law on ius soli,' which risks being transformed into a tragic day for our country," the letter read, as quoted by the Local media outlet.

© AFP 2020 / GIUSEPPE CACACE
Italy's Monte dei Paschi Saga Threatens to Conclude With 'Financial Fascism'
Their appeal has been supported by parliament members from the Democrats and Progressives party and the Communist Refoundation Party.

"#MarchOnRome cannot and should not repeat," Mayor of Rome Virginia Raggi wrote on her Twitter page.

Leader of the Italian Left party Nicola Fratoianni claimed that the actions of Forza Nuova were "an offense to the establishment of the anti-fascist republic."

The far-right party itself claims that there is no fascist ideology. Roberto Fiore, the leader of the party, referred to the protest action as "patriotic, not a pro-fascist manifestation," noting that the Interior Ministry could be making a mistake if it prohibited the march.

Over 90,000 Fipronil-Contaminated Eggs Confiscated in Italy