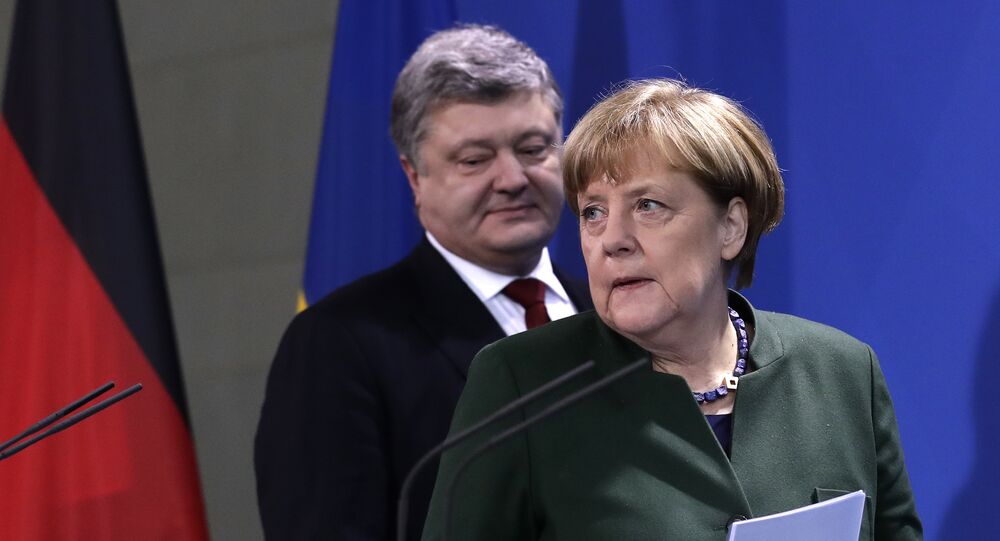 The revelation that Ukraine is the recipient of the lion's share of German funds for civil society support in Eastern Europe shows that Berlin is keen to stake out a leading political role there, Russian Duma Deputy Aleksey Plotnikov told Radio Sputnik.

A German government program to support civil society in six formerly Soviet countries in Europe and the Caucasus has dedicated half its budget to Ukraine, German opposition politicians have discovered.

Representatives from the leftist Die Linke party tabled a parliamentary question asking how the government distributes the budget for the project, which is part of the EU's "Eastern Partnership" initiative that was set up in 2009 to promote relations with six former Soviet countries: Armenia, Azerbaijan, Belarus, Georgia, Moldova and Ukraine.

© Sputnik / STR
'Confrontation With Russia': German Financial Support for Ukraine Looks Fishy
The German foreign ministry project is called "Strengthening cooperation with civil society in the countries of the Eastern Partnership and Russia," and has an annual budget of €14 million ($16.6 million). Over the past three years, half that budget has been spent on Ukraine, Berlin disclosed.

The lucky beneficiaries include the European Academy Berlin, which offers advice on governance and public financial management among other areas, as well as the local affiliate of German state broadcaster Deutsche Welle. The network has received almost €5 million ($5.9 million) for projects in Ukraine, over the last three years alone.

Aleksey Plotnikov, a member of the Russian State Duma Committee for CIS affairs, Eurasian Integration and Relations with Compatriots, told Radio Sputnik that the is a clear political dimension to the funding.

"The fact that this is about politics is very obvious. Of course, Germany has economic interests, but in the present situation it is difficult to talk about long-term economic interests given the very tough situation in Ukraine itself. Finally, the third thing which should be kept in mind is that each country has its own geopolitical, geo-economic and historical interests, which are not always advertised."

© AP Photo / Geert Vanden Wijngaert
'Not European': Juncker Cuts Ukraine's Poroshenko Down to Size
"Today, Germany is in a situation where it not only wants to 'stake out' its place as the leading economy of a united Europe, but also wants to play a political role, which it has been unable to take on for historical reasons. Now, for German politicians, restoration of full-fledged political sovereignty and playing 'their own tune,' is very important. That's why the Eastern Partnership project is an opportunity for Germany, for a relatively small amount of money, to keep a 'finger on the pulse' of politics, to monitor those political processes that occur in the countries of this project."

Berlin should be careful when offering money to Kiev, because accountability for how funds are spent isn't always easy to achieve, Plotnikov said.

"I think it's unlikely that people who are close to the distribution of these funds know the items on which this or that amount is spent. All that is connected with the Ukrainian government, with its budget and expenses is a 'black hole' closed from prying eyes, a closed secret. I don't exclude that some of these funds aren't spent by Kiev on their intended purpose, but goes towards support for the smoldering military conflict, which we all know about," Plotnikov said.

Incidents With Russian Reporters in Ukraine in 2014-2017