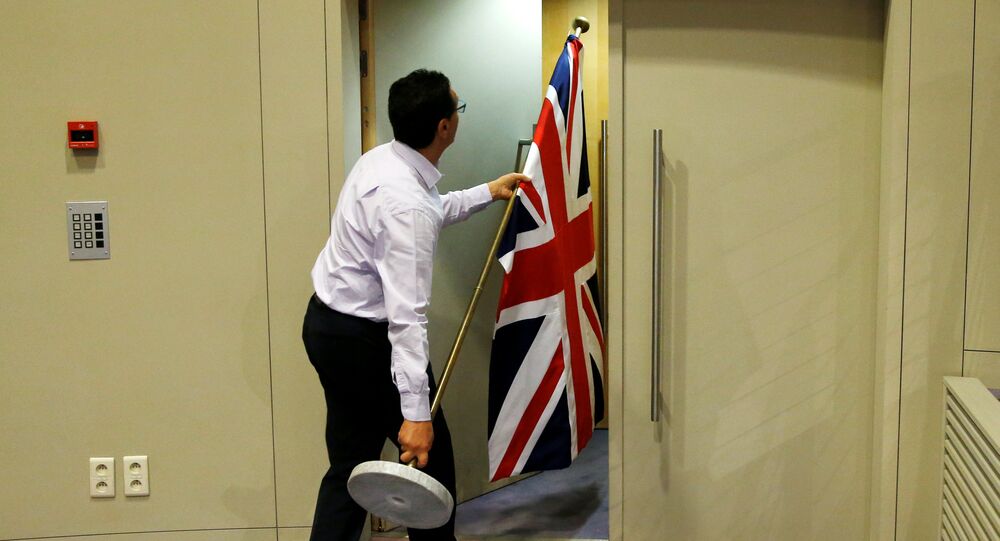 Brexit Passions: Any Way Forward for UK is to 'Walk Out of the Talks' With EU

As the newest round of negotiations on Brexit proceeded, the UK came under fire from EU authorities, who criticized its position as "unserious" and non-constructive. Sputnik Radio discussed the issue with the founder of the United Kingdom Independence Party Alan Sked, who explained what message the EU rhetoric actually sends to the UK.

In August, the UK government published its position papers on leaving the EU. The documents represent the UK position on trade, the Northern Ireland border and post-Brexit regulations.

However, as the new round of negotiations on Brexit proceeded, the EU leaders criticized the papers for failing to address the divorce bill issue.
European Commission head Jean-Claude Juncker called the provided documents unsatisfactory.

"I have read with all necessary attention all the position papers drawn up by the UK government but none of them really give me satisfaction, so there is an enormous amount of questions that need to be resolved," he said on Tuesday, while addressing an audience of EU diplomats.

This came a day after the EU's Brexit negotiator Michel Barnier urged Britain to speed up and start 'negotiating seriously.'

Radio Sputnik discussed the issue with Professor Alan Sked, a British academic and politician, Professor Emeritus of International History at the London School of Economics, and the founder of the United Kingdom Independence Party, who has an entirely different stance on the issue.

"They [EU leaders] are not negotiating in good faith, they have been patronizing, insulting. They begin to treat the UK the same way they [treated] Greece when Greece was negotiating its bailout. I doubt that Jean-Claude Juncker had actually read the papers," he told Sputnik.

"So, what they are actually doing is… they try to put pressure on the British government to surrender, particularly over the issue of money, before they discuss any substantive issues… particularly the free trade deal, which is crucial in the talks," he explained.

Anything the British government puts forward, he went on, is dismissed as not serious and full of holes and ambiguous. It is the EU, he said, that is not treating these negotiations seriously. They won't begin to treat them seriously until the British are prepared to send them 5 billion euros or 100 billion euros, whatever the figure is. But that is not going to happen, he stated.

© AFP 2021 / OLI SCARFF
EU Urges Britain to 'Speed Up' Brexit Process Demanding Exit Fee
The comments of the British politician followed reports that the EU is demanding that the UK pay for its exit from the bloc.

"According to the report, France had proposed the UK pay €10bn (£9.25bn) per year into the EU budget during a three-year transitional period and continue to accept EU law. The UK would then be allowed to progress to trade talks in October," The Guardian reported on Tuesday.

The outlet, however, added that "sources at the Élysée dismissed the notion," adding that the 'allegations' were "not based on anything and did not correspond to reality."

The newspaper then reminded that "the €10bn figure corresponds to the black hole in the EU’s annual accounts after Brexit. Moreover, EU officials are studying whether Britain could continue to pay into the EU budget until 2020."

Alan Sked commented to Sputnik on the demand.

"Legally speaking, it is quite clear that the UK doesn't own the EU a single penny. There is nothing in the treaty to say that when you leave, you have to pay anything. And the House of Lords had a Committee report on this, and they said legally, there was no case for paying anything back to the EU," he explained.

© CC BY 2.0 / Manuel Gonzalez Noriega
UK-Irish Border to Become Key Issue at Brexit Talks on Wednesday - Source
"The issue is when the UK leaves, the EU will have a huge hole in its budget and the EU authorities don't know how to fill it, because they can't agree on this among themselves these days with regard to Ireland's borders or anything else. And they have got plans supposedly for future integration, but they can't agree on this either. If that budget gap was left by Britain, I don't see how they can agree on how to set that out between themselves. So they desperate for money," he added.

The British politician then suggested that the British government is hinting that it could provide the EU with money if there is a transition period lasting two or so years, once a deal is settled on one or several implementation periods during which it remains inside the EU and the single market. In that case it will be prepared to pay a certain amount of money each year, supposedly 10 billion euros per year.

However, he stressed that the British government has made its position clear on other issues: on Ireland, on the rights of EU citizens, and practically everything else. Nevertheless, whatever it says, it is never good enough for the EU. The EU just dismisses anything put forward by Britain, he said.

"I think that any way forward for Britain is to walk out of these talks," Alan Sked concluded.