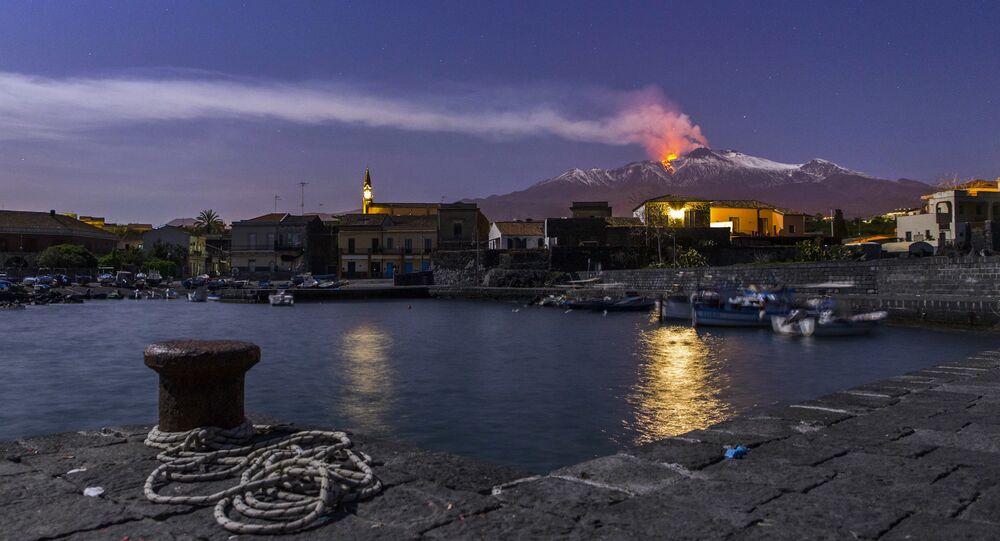 Volcanoes in Italy’s Phlegraean Fields (Campi Flegrei) in the vicinity of Naples may erupt in the near future. This is well known to scientists, but if an eruption happened today, it would be impossible to evacuate its inhabitants, as to date, there is no official evacuation plan, volcanologist Giuseppe Mastrolorenzo told Sputnik Italy.

Mastrolorenzo, a volcanologist at the Vesuvian Observatory (l'Osservatorio Vesuviano) said that the risk of eruption of two Neapolitan volcanoes is extremely high; one can say that this is the highest risk of eruption in the world.

“The risk is estimated by the likelihood of a devastating eruption and the consequences, that is, the number of people who are at risk. In this situation, we are talking about 3 million people who can suffer in the event of the eruption of Mount Vesuvius or the volcanoes of the Phlegraean fields,” Mastrolorenzo said.

© Photo : Youtube/CONTENTbible
Strike Me Dead! Volcano Eruption and Lightning Meet in a Rare Weather Phenomenon
In addition, the Phlegrean Fields are home to super-volcanoes, one of the few in the world that can erupt on an enormous scale. The eruption can be “hundreds of times larger than the eruption of Mount Vesuvius,” which destroyed the ancient city of Pompeii.

The volcanologist said that in 2012 these super volcanoes were given a yellow code or second level of threat out of four; after this there is an orange and red level.

“But the paradox is that at the red level the population cannot be rescued, because there is a plan for the introduction of a state of emergency, which exists only in the form of a common project, but there is no concrete plan for the evacuation of the population,” Mastrolorenzo said.

© CC0 / Pixabay
'Magma Mia, Here I Flow Again!' World's Most Deadly Volcanoes
He further said that in recent years, an emergency plan for the Phlegrean Fields has been developed, but, in his opinion, it underestimates the gravity of the situation, since it refers to an average eruption, rather than a large-scale catastrophe.

“There is a plan to move the population to other areas of Italy, as it is assumed that some mayors will use the local scale evacuation plan, but to date not all mayors in the eruption zone have this devised arrangement,” the volcanologist said.

According to Mastrolorenzo, all Italian citizens should be informed about the evacuation plan in order to be able to take refuge in safe places.

“I do not understand why the plan's approval keeps getting postponed. I believe this is some general tendency to remain optimistic, although not everyone realizes it. But as the natural disasters of recent decades such as the tsunami in the Indian Ocean to Hurricane Katrina have shown most often,  risks are known, but various organizations and the scientific community underestimate them in preparation,” the volcanologist said.

The situation is further complicated by the fact that, in addition to the natural threat of the entire seismic zone, in the Ischia region and the Phlegrean Fields, there is a plan to construct geothermal power stations that will drill deep into the earth using high temperatures to a depth of about 1 kilometer.

According to Mastrolorenzo, such projects can lead to earthquakes, and in some cases, to volcanic eruptions. Despite the threat, the authorities have so far not opposed these projects.

“In a high-risk zone, people create new risks. Man must adapt to nature, and not nature to man. Eruptions or earthquakes can occur at any moment, therefore, in addition to monitoring the situation, we should prepare, build seismic resistant houses and develop appropriate plans,” the volcanologist added.