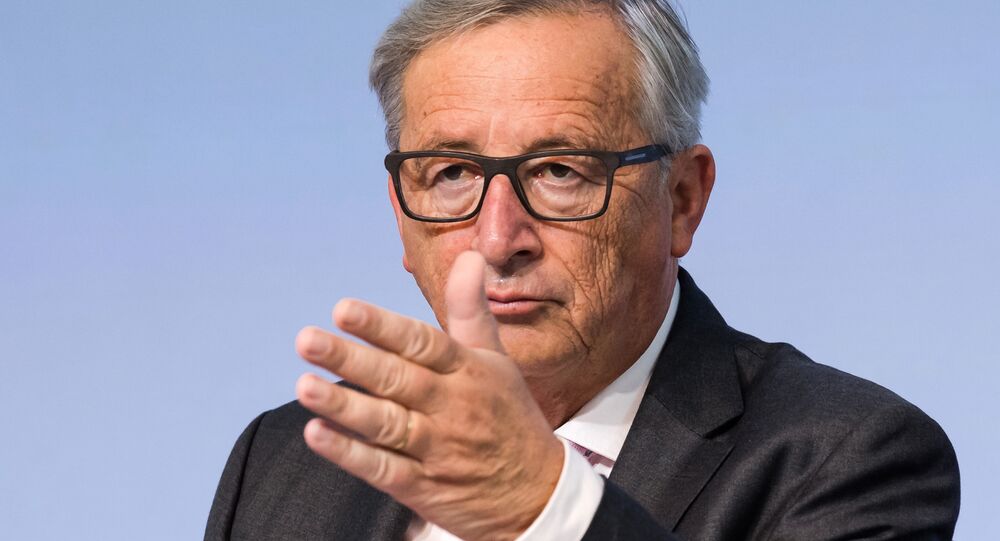 'Not European': Juncker Cuts Ukraine's Poroshenko Down to Size

European Commission President Jean-Claude Juncker’s opinion that Ukraine is neither part of the European Union, nor part of NATO reflects the West’s growing annoyance regarding false statements made by the Ukrainian leader, political analyst Oleg Bondarenko told Sputnik.

Juncker had no other choice than to try to bring him to his senses by telling him the hard truth, because “Europeans are not used to telling lies,” Bondarenko said.

“A few days ago I saw that my friend Poroshenko said that Ukraine is the European Union, and it is NATO. At the moment, it’s neither one nor the other, and I think we do need to bear this in mind,” Juncker said at a conference of EU ambassadors in Brussels on Tuesday.

He added that because Ukraine is the only country in Europe that has a war going on in its territory, “it is not 'European' in the sense of the European Union.”

In an interview with Sputnik, Oleg Bondarenko said that Petro Poroshenko was engaged in wishful thinking.

“All Poroshenko is doing is lying to everyone, both in and out of Ukraine, about reforms and fighting corruption. He is also making all sorts of promises to the US and Europe. It looks like the European leaders are already fed up with all these lies and attempts to enmesh the West in his squabbles with Russia,” Bondarenko noted.

© REUTERS / Valentyn Ogirenko
Knocking on the EU's Doors: Europe Now in Fear of Project It Launched in Ukraine
Earlier, the US special representative for Ukraine, Kurt Volker, likewise said that Ukraine is not yet ready to join NATO.

On August 26, Poroshenko said that Ukraine would stay the course of European and Euro-Atlantic integration and was all set to join the EU and NATO.

“We have only one road to follow – a wide Euro-Atlantic highway leading to membership in the European Union and NATO," he emphasized.

He added that even though “certain politicians both in Ukraine and abroad” doubt that Ukraine will ever be able to join the EU and NATO, he was confident that Kiev would meet all their membership criteria.

© REUTERS / Andrew Kravchenko/Pool
Poroshenko Hopes to Discuss Visa-Free Regime for Ukraine With Juncker
In December 2014, the Ukrainian Parliament voted to cancel Ukraine's non-aligned status and adopted a new military doctrine, which put the former Soviet republic on a course towards NATO membership.

Kiev has until 2020 to ensure its armed forces’ fully meet NATO’s military standards.

Meanwhile, Ukraine does not meet a number of crucial requirements for NATO membership, including the military spending issue and the structure of the armed forces.

Poroshenko Hopes to Discuss Visa-Free Regime for Ukraine With Juncker

Juncker 'Saddened' by Outcome of Dutch Referendum on EU-Ukraine Deal