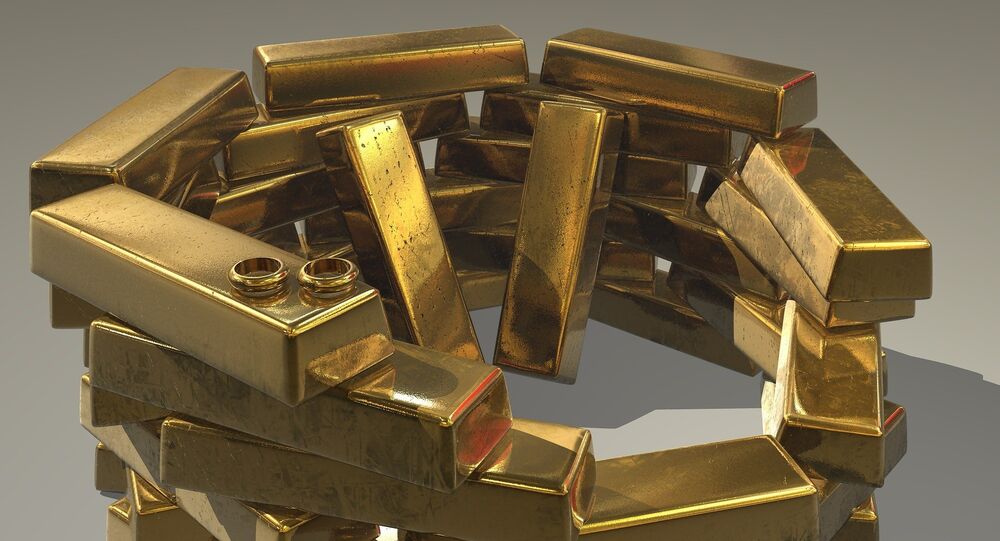 He said that "this is semi-fake news" as only fifty percent of Germany's gold reserves were returned. Given the sluggish schedule Bundesbank has set itself, this is hard to label a success, according to him.

"Well, fifty percent of the gold had been brought back. This, in principle, is good. However, the newspaper's report is only half true because Bild said that Germany is bringing back all its gold reserves. But it hasn’t managed to do this, it’s only returned half," Boehringer told Sputnik Germany.

© Sputnik / Oleg Lastochkin
Where German Gold Is Stored and How to Bring It Back to the Country
He also drew attention to Bild's claim that this has occurred "three years earlier than planned", recalling that Bundesbank announced in 2013 that all the country’s gold ingots will be returned to Germany in their entirety by 2020.

"An attempt to transfer several tons of gold from point 'A' to point 'B' within a seven-year period cannot be called an art. A private enterprise could resolve this task in a few days, weeks or months. It is only natural to implement the mission three years earlier than planned given a seven-year schedule," Boehringer added.

He also drew attention to the activity of his movement which he said added significantly to the German gold being returned to his country.

"Until 2012, no one in Germany knew where the German gold was being stored. This topic was a complete state secret, and only our movement ["Bring Our Gold Back to Our Homeland!"] managed to make this information public," he said.

"We have made significant progress in this matter, but the Bundesbank is cautious. However, we haven’t stopped there. Only with the help of public pressure will we be able to return the rest [of German gold reserves]," Boehringer pointed out.

He called for a meticulous check of the returned gold bullion to verify its authenticity.

"There was no serious audit in Frankfurt. The Bundesbank failed to provide any evidence pertaining to the return of the gold ingots. Nothing was checked by an external certified auditor and nothing was documented," according to him.

The German central bank, the Bundesbank, has brought back the gold reserves it stored in vaults located in Paris ahead of schedule, according to a statement published on Wednesday.

German 'Central Bank' has 3370tons of gold reserves, how much does @CBKKenya @njorogep keep? https://t.co/jmoap9ggmV

"50.6 per cent of Germany's gold reserves are now stored in Germany. This goal was set out by the Bundesbank in 2013 and was scheduled to be achieved by 2020 at the latest," the statement read.

Carl-Ludwig Thiele, a member of the central bank’s executive board, said the transfer meant the plan to bring back the gold had been wrapped up "around three years ahead of the time we were aiming for."

© CC BY 2.0 / Bullion Vault / gold bar on coins
Germany Gets the 'Wrong Suitcase' While Repatriating Its Gold Reserves From US
The regulator has said the country's gold reserves totaling 3.378 tons are now kept in Frankfurt am Main and in its two partner banks in New York and in London.

According to Bundesbank, having the gold reserves stored abroad means they can be exchanged for foreign currencies very quickly. The gold reserves also serve to "build trust and confidence at home."

Commenting on the matter, Boehringer described it as "just a bad anecdote."

"At the end of the day, in a currency crisis no one wants to have the dollar as a paper currency. Everyone will want to hold physical gold," he said, slamming the Bundesbank's argument as "absolutely wrong".

German Central Bank Brings Gold Back From France Ahead of Schedule