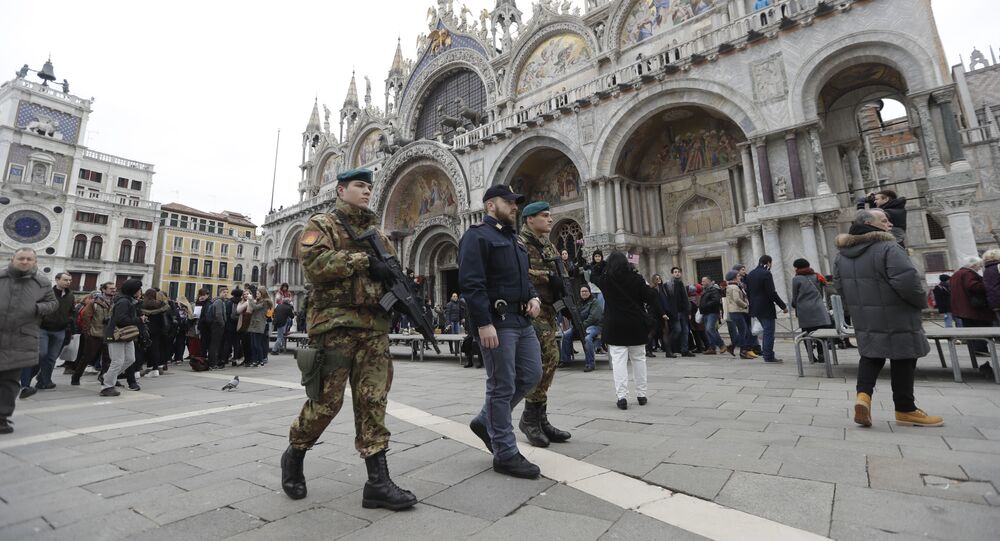 'We'll Send Them to Allah Before They Can Do Harm': Italian Mayor to Terrorists

Any suspected terrorists would be immediately gunned down should they dare shout "Allahu Akbar" in the center of Venice, said Mayor Luigi Brugnaro, triggering mixed reactions.

"If someone yells 'Allahu Akbar' while running through St Mark's Square, we'll gun them down," he told the audience of the Rimini Meeting, an annual multi-event Catholic festival held every last week of August in the resort city of Rimini.

"A year ago, I said [it will be done] at four steps, now I’m saying it would happen at three,” he added.

"I will say it in Venetian [dialect]: Ghe sparemo (We will shoot them)," the Mayor further warned.

Luigi Brugnaro explained that these remarks come in the follow-up to the recent terrorist attack in Barcelona, where 15 people were killed by a van, which intentionally rammed into people at the city's Las Ramblas pedestrian mall last week.

"Unlike in Barcelona, where they had not provide protection, we keep our guard up," he said.

He further recalled the arrest in Venice in March of four suspected Kosovan jihadists, with valid residence permits in Italy, who allegedly planned to kill hundreds of tourists by blowing up the Rialto Bridge, a major tourist attraction and the oldest bridge across the Grand Canal in Venice.

"In Venice, we arrested four terrorists who wanted to blow up the Rialto Bridge, claiming that they wanted to go to Allah. We'll send them straight to Allah before they can do any harm," the mayor said.

The comment referred to a wiretapped telephone conversation, where one of the suspects told another:

"With all the non-believers there are in Venice, if you put a bomb under the Rialto Bridge you’ll immediately earn a place in heaven.”

The comment of the mayor was called provocative by Italian media, however seemed to have caused more positive reaction throughout social media.

Mayor Brugnaro is a man of conviction and taking the responsibility of his office seriously. I could never see London being that lucky.

​What caused uproar was the reaction to it of Dario Nardella, the mayor of Florence, the capital of Italy’s Tuscany region, who rushed up to Brugnaro after the meeting, shouting "Allahu Akbar" and laughing. The "joke" caused unanimous laughter.

The amusement however was caught on camera and caused criticism with many saying it was in poor taste, especially in the wake of the Barcelona attack.

"One shouts 'Allahu Akbar,' the other says 'We shoot,' and everyone laughs," wrote one of the Twitter users.

​Later, Dario Nardella apologized for it on his Facebook page.

"I apologize for some remarks caught on online video. It was not my intention to offend any person, least of all the Muslim community, or to joke about their religion, or to evoke the tragic events of these days," he wrote.