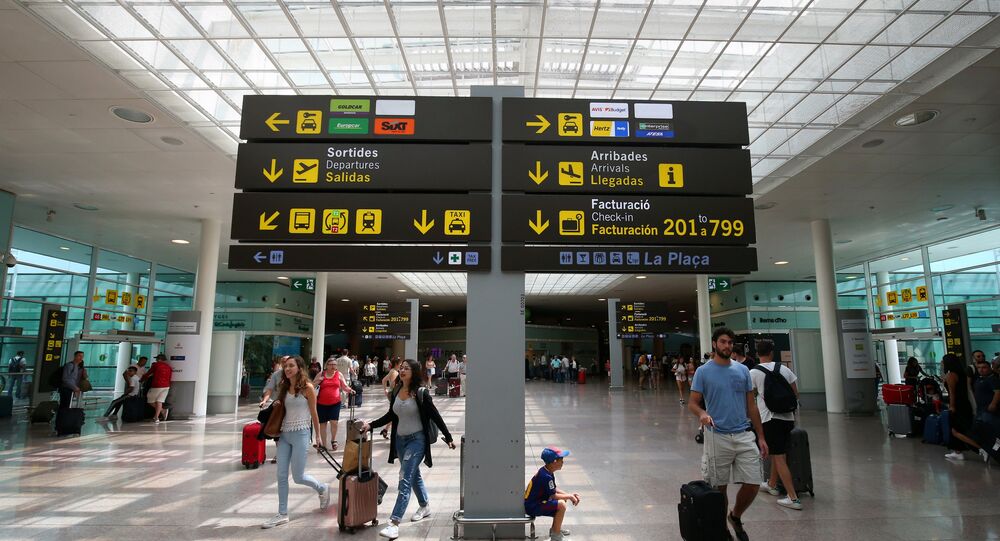 The strike of the Barcelona–El Prat Airport employees was suspended after a van drove into a crowd of pedestrians in the central Ramblas area in the Spanish city of Barcelona, according to local media.

© AFP 2020 / Josep LAGO
Barcelona Mourns for Victims of Thursday Terror Attack (VIDEO)
On Thursday, a van drove into a crowd of pedestrians in the central Ramblas area in the Spanish city of Barcelona, leaving 13 people dead and over 100 injured, in what police said was an act of terrorism. The Daesh terror group (outlawed in Russia) claimed responsibility for the attack. Hours after the tragedy in Las Ramblas avenue another vehicle attack took place in the coastal town of Cambrils, south of Barcelona. Six civilians and a police officer were injured, with some of them in critical condition.

The organizers of the strike asked airport employees to return to their workplaces, El Pais newspaper reported.

On Monday, the employees of the passenger and baggage check services of the airport started an indefinite strike. The strike committee has refused the offer of Grupo Eulen and the Catalan government to raise worker salaries by 200 euros ($235) for each employee for a one-year period. The strikers, whose salaries range from 900 to 1,100 euros ($1,057-$1,292) demanded payments of an extra 250 euros ($294) for a 15-month period.

© AP Photo / Oriol Duran
Spaniards Still in Deep Shock, Afraid Following Two Terror Attacks in Catalonia
From July 24, a work-to-rule action was held, in which Eulen employees did no more than the minimum required by their contracts. As a result, because of long checks of each passenger, about a thousand people were late for flights, while the airlines were forced to postpone departure times.

From August 4, the airport's control staff began a partial strike. For several days, they interrupted work for an hour four times each day of the strike. Due to this action, waiting time in lines at the airport reached one and a half hours. In connection with the crisis, the government of Spain and the authorities of Catalonia sent employees of the Civil Guard and Catalan law enforcement bodies Mossos d'Esquadra to the airport in an effort to ensure security and public order at the airport. The Spanish government also promised to appoint a mediator whose decision will be binding for both parties.