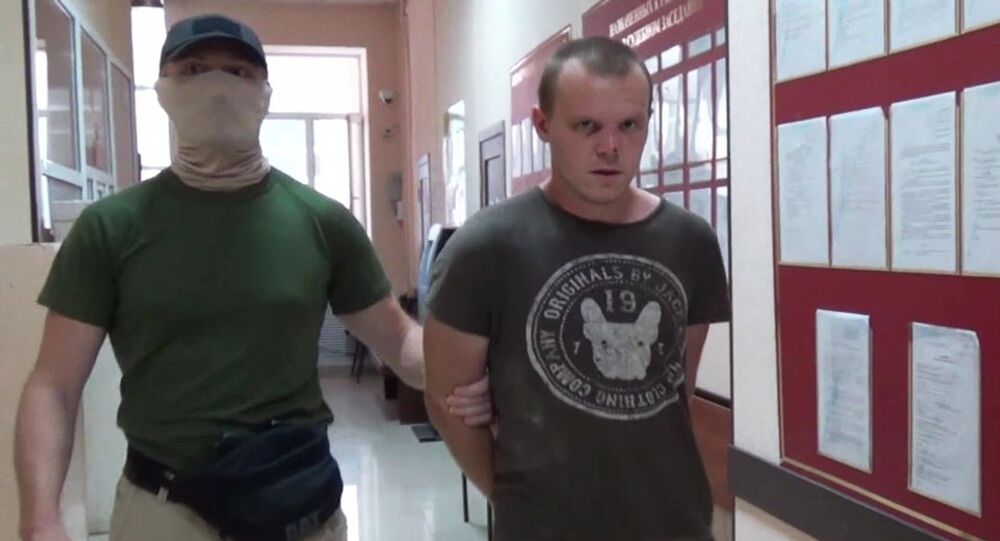 After the Russian Federal Security Service (FSB) released a video showing the Ukrainian agent in Crimea saying he was ordered to plot acts of sabotage in the region, the Ukrainian Armed Forces said the serviceman had been dismissed from the army prior to the incident.

Russian FSB
WATCH: Detained Ukrainian Agent Admits Guilt in Crimea Sabotage Plot
Earlier in the day, the Russian Federal Security Service (FSB) said that Gennadiy Limeshko was detained on Saturday, August 12, while attempting to damage power lines near the Sudak-Novy Svet highway in southern Crimea. Limeshko, a senior reconnaissance scout with the Ukrainian military, is also suspected of planning to spark forest fires and cause rockfalls in the same region. According to a footage released by the FSB, Limeshko admitted his guilt.

"According to preliminary data, this was a citizen of Ukraine that served in one of the units of Ukraine’s Land Forces. In May, he was dismissed … for professional incompetence of this former serviceman," Venskovych said, as quoted by the UNIAN news agency, adding that at the moment Limeshko "has no connection" to Ukraine’s Armed Forces.

© AFP 2020 / VASILY MAXIMOV
Dozens of Top Ukrainian Officials Investigated Over Corruption - Reports
Earlier in the day, spokesman of the Ukrainian State Border Guard Service Oleg Slobodyan said, as quoted by the UNN news agency, that Limeshko legally crossed the administrative border with Crimea on August 9 and carried no forbidden items. Slobodyan also confirmed that Limeshko is a Ukrainian citizen.

In December, Republic of Crimea head Sergei Aksyonov said that in 2016 alone, local authorities prevented 13 attempted terrorist attacks, with the detainment of Ukrainian sabotage groups being the most resonant of them.