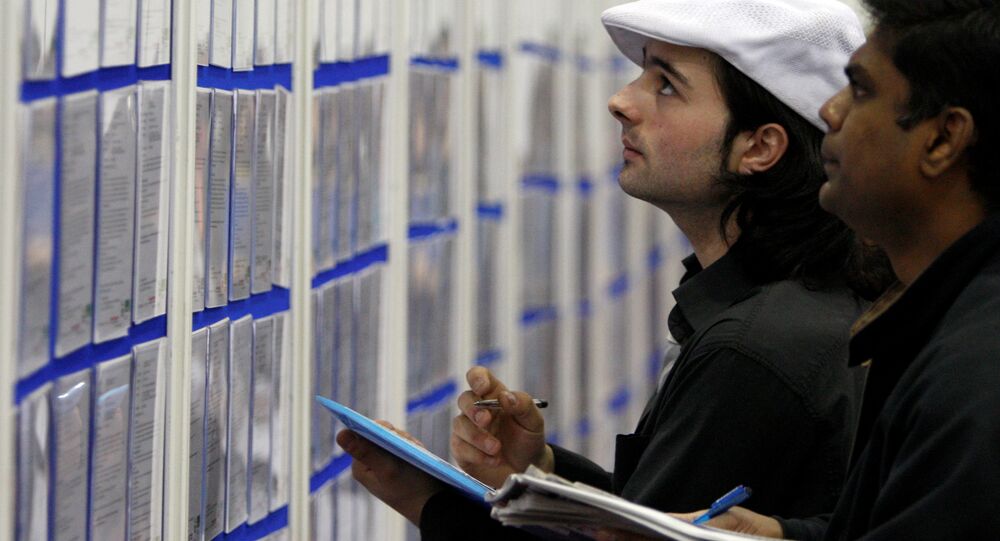 The share of the working-age population of the United Kingdom moving region and employer has fallen by 25 percent since 2001, around 0.6 percent of the population (140,000 people) moved region for work last year, accoding to report of the Resolution Foundation think-tank.

MOSCOW (Sputnik) — The number of people relocating within the United Kingdom to get a new job has decreased 25 percent since the turn of the millennium, with younger graduates showing the biggest fall in mobility, the Resolution Foundation think-tank said in a survey released Tuesday.

"The share of the working-age population moving region and employer has fallen by 25 percent since 2001, around 0.6 percent of the population (140,000 people) moved region for work last year," the study said.

© REUTERS / Neil Hall
Over 50% of Small UK Firms Worry About Impact of Brexit on EU Migrant Workforce
The survey has also found that the decline in mobility is driven by young graduates. The most significant decline in the number of those who moved region and employer was among younger graduates as the number of those who relocated decreased by almost half — from 1.8 percent of graduates in 2001 to only 1 percent in 2016.

"It could be that this fall in mobility is the result of changes to the graduate population — the average age of people holding degrees having risen — which may be causing the decline. However, once we control for age and other economic and demographic characteristics we find that whereas graduates under the age of 35 were almost 5.7 times more likely to move region and employer than non-graduates in the 1990s they are now just 3 times as likely," the survey read.

© AFP 2020 / POOL/PAUL ROGERS
Black UK Graduates Earn 23% Less Than White Colleagues - Trades Union Congress
According to the survey, migrants in the United Kingdom show a different trend. In 1995, foreign workers represented 8 percent of regional job-to-job moves, while in 2016 this number amounted to 24 percent.

The think-tank lists the leveling of employment rates between the UK regions and low wage growth among the reasons for the reluctance to relocate for work.

According to the Resolution Foundation, the labor market of the United Kingdom is now expected to face serious shifts due to Brexit. Major changes are expected to touch migrants and those firms that employ them, as the laws regulating their stay and work in the interior of the UK will be different.