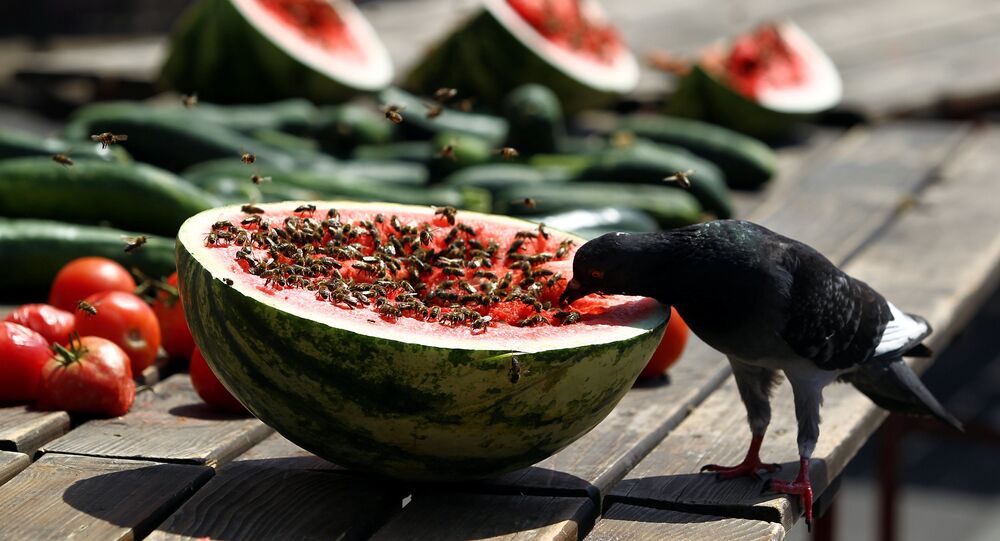 Croatia's Balkan neighbors have appealed to the EU Commission after Zagreb decided to hike customs control costs for imports from non-EU countries, but help from Brussels for producers outside the EU is unlikely to materialize, economist Borislav Borovic told Sputnik.

Serbia has warned that it might be forced to implement countermeasures after Croatia increased import taxes on fruit and vegetable imports from its Balkan neighbors.

In July, Croatia's ministry of agriculture implemented new regulations on imports from non-EU countries, which subject more fruit and vegetable varieties to customs controls and increase the cost of the checks.

© AP Photo / DRAGO HAVRANEK
Ukraine Mulls Repetition of Croatia's 'Reintegration' of Serb Krajina in Donbass
Previously, exporters to Croatia had to pay 90 kunas ($14.2) for a phytosanitary inspection, which has been hiked to 2,000 kunas ($316). Food producers in Serbia, Bosnia and Herzegovina, Montenegro and Macedonia have protested the higher taxes and their governments have demanded the Croatian government to change the rules or face countermeasures.

Ahead of a meeting of regional trade and agriculture ministers in Sarajevo on Monday to discuss the issue, Serbian Trade Minister Rasim Ljajic said that if an agreement can't be reached with Zagreb, the Serbian government will appeal to the EU Commission and if that doesn't resolve the situation, then Serbia will take action.

"Of course, we can introduce countermeasures, but we want to avoid this solution because the introduction of measures and countermeasures is damaging for our relations, businesses and ultimately consumers," Ljajic told Serbian broadcaster RTS.

At the meeting, the agriculture, trade and economy ministers from in Serbia, Bosnia and Herzegovina, Montenegro and Macedonia called on Croatia to reduce the price of the inspection to reflect the real cost, and the cost of the same inspection in other European countries. They also signed a joint letter to the European Commission, urging Brussels to force Zagreb to back down.

© AFP 2021 / ATTILA KISBENEDEK
Belgrade Demands Release of Russian, Serbian Nationals Detained in Kosovo
Economist Borislav Borovic told Sputnik that the Balkan countries should not count on support from Brussels in the matter, since Croatia's new import restrictions play into the hands of EU producers.

"Or, it [the help] will come late, when the increased cost of phytosanitary control has already hit basic seasonal goods imported to Croatia. The thing is that Croatia itself is suffering from the flow of fruit and vegetables from the EU, for whom the Russian market is closed because of Moscow's counter-sanctions. We are talking about large quantities of goods, so it is unlikely that Croatia itself chose to take these protectionist measures against its neighbors," Borovic said.

Another theory is that the EU is happy to unite the former Yugoslav countries against Croatia, in the hope of uniting them in a Balkan customs union. The formation of such an organization was previously floated in Brussels, but was not universally popular with the Balkan nations. Now, the possibility of a trade war with Croatia presents them with an opportunity to make agreements among themselves.

"Perhaps what is happening should be viewed in the context of a 'Europe of concentric circles,' in which the 'customs union of the Western Balkans' becomes a potential circle, probably the furthest from the center, which is preparing to by adapted for EU succession."

© Photo : Srdjan Zivulovic
Croatia Joins Schengen Info System Edging Closer to Entering Visa-Free Area - EU Commission
Borovic explained that for the EU, the creation of a 'customs union of the Western Balkans' would be the most desirable option, because it would preserve the potential for the former Yugoslav countries to enter the EU in the future, as well as reduce the economic and political influence of Russia.

"However, in this case, Serbia would be unlikely to receive more advantages than it has now, as a member of the Central European Free Trade Agreement (CEFTA). At the same time, it would be forced to suspend the free trade agreement with Russia, which is a serious opportunity for us," the Serbian analyst said.

CEFTA is a multilateral free-trade agreement among several southeastern European countries: Albania, Bosnia-Herzegovina, Macedonia, Moldova, Montenegro and Serbia. Croatia was a member until it joined the EU in July 2013.

Russian counter-sanctions against EU countries have been in place since August 2014, after the EU, US and a handful of their allies imposed sanctions following Crimea's decision to rejoin the Russian Federation. The embargo on meat and dairy products, fish, fruits and vegetables from countries that sanctioned Moscow are set to be in force until December 31, 2017.