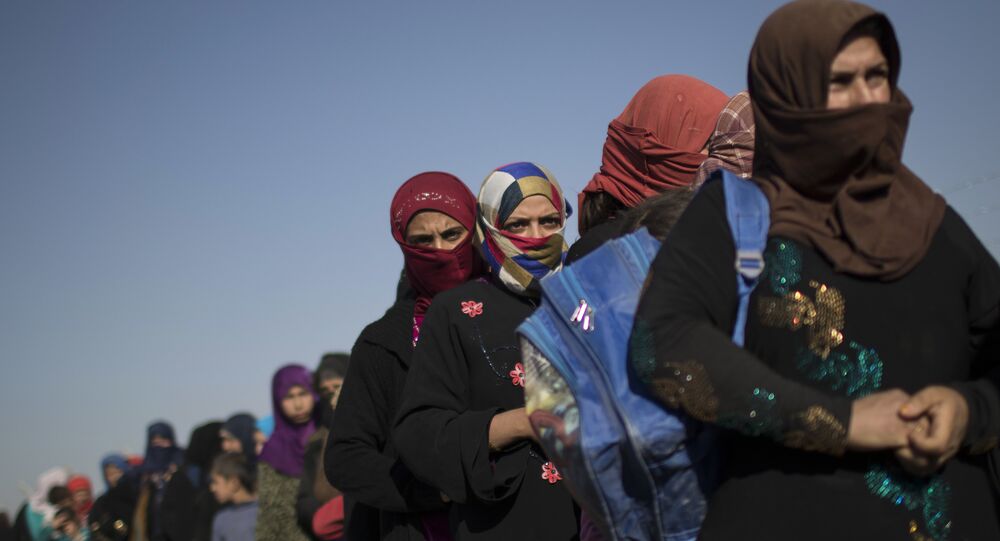 Daesh recruiters are operating all over Europe and use a variety of methods to attract impressionable young women to join the jihadist group, experts told Sputnik Deutschland.

© REUTERS / Omar Sanadiki
Syrian Army Liberates About 39 Square Miles From Daesh in Suwayda Province
The recent case of Linda W., a 16-year-old German runaway who was discovered by the Iraqi army in Mosul last month, has drawn attention to the recruitment of young girls by radical Islamist groups in Germany.

Linda W. was one of five German women discovered hiding in a network of tunnels below ground in the Iraqi city, armed with weapons and suicide bomber belts, ready to blow up the advancing Iraqi army.

In the past few years, more than 930 Islamists have traveled from Germany to join the Daesh terrorist group in Iraq or Syria. According to Germany's Federal Office for the Protection of the Constitution, 20 percent of them are women and five percent were minors. Of those under the age of 18, half were female, BZ Berlin reports.

Sigrid Herrmann Marschall, an expert in Islamism in Germany, told Sputnik Deutschland that Islamists all over the country are trying to recruit young girls to join Daesh. He spoke of one "remarkable case," involving an interpreter in Leipzig.

© AP Photo / Armin Weigel
Refugees walk to a chartered train at the railway station of Passau, Germany, Jan. 5, 2016
"An interpreter who belonged to an extremist mosque spoke to Muslim refugees," he explained.

"After a while, the security services responsible wondered why these refugees wanted to return to their home countries. But they didn't want to provide humanitarian aid in the country, but to fight for IS (Daesh). Such cases must be urgently prevented. That is why we need structural analysis and as much information as possible about these things, in order to inform and protect the population," Marschall said.

© CC0
Fatal Attraction: What Drives Young German Women Into the Arms of Daesh?
German teacher Birgit Ebel has set up a charity to prevent young girls from being recruited by radical groups. She told Sputnik that Islamist recruiters in Germany have contacts in Syria and elsewhere.

"They also earn money by doing it, because they provide male fighters and future IS (Daesh) brides, who will take care of the new generation of IS. This is a lucrative business. Often, people from the criminal milieu are also behind it, which mixes everything up. At first, the recruiters meet with the prospective recruits anonymously, in so-called backyard mosques. Or they are invited to Dawah in apartments, conspiratorially. This takes place behind closed doors, in closed rooms, it's hard to control," Ebel said.

Recruiters use young male Daesh fighters to attract the girls, which Ebel calls the "Romeo effect." They make promises of marriage in order to get the young women to travel to the Middle East. Once she has agreed to make the journey, she rarely does so alone.

"As a rule, the girl does not travel alone, but is accompanied by other radicals during the flight and on the journey. They are often accompanied by an already radicalized female friend of a similar age," Ebel said.

Many German recruits fly to the Turkish capital, where they are met by Salafist associates.

"There are a lot of Islamists, including many IS supporters, active in Turkey. The Turkish authorities are very lax with extensions of personal documents and passports and the radicals also benefit from this. The girls are approached here by middlemen working for networks and individuals. These are key figures, who then smuggle the girls across Turkey."

© REUTERS / Murad Sezer/Files
A Turkish military warning sign, with the closed Karkamis border gate in the background, is pictured in Karkamis, bordering with the Islamic State-held Syrian town of Jarablus, in Gaziantep province, Turkey, in this August 1, 2015 file photo
Gaziantep, a city in the western part of Turkey's Southeastern Anatolia Region, lies 50km from the Syrian border and is around 12 hours' drive from Istanbul. Many Islamists have internet profiles in which they name Gaziantep as their residence, in a signal to other Daesh sympathizers in Germany

"This area is a central transit and transfer point for IS. On Internet profiles of well-known Islamists, Gaziantep is often stated as their place of residence, although these people live in [German towns] Herford, Detmold, Guetersloh or Bielefeld."

"I have heard reports saying, 'It is no problem at all to get to IS by taxi from Gaziantep. You have to pay 25 euros ($29) and you are already in the terrorist area of the Islamic State."

Some of the women receive more premium tasks, for example working for the Daesh morality police. Others even take up arms for Daesh or work for its propaganda arm.

In order to prevent women from suffering this fate, Ebel says that the authorities must work to stop Daesh recruitment in the very beginning.

"The most important thing, however, is to nip the problem in the bud. This means prevention and prophylaxis. Through good education in schools, through good, democratic pedagogy which contains humanism, equal rights and equality of opportunity. We must pay close attention to the view that young people threatened with radicalization have of the world. We have to pay attention to what they are saying."

Thomas Ritter, spokesman for Germany's Federal Office for Migration and Refugees (BAMF) told Sputnik that the German federal government "attaches great importance to the topics of prevention and de-radicalization."

© AFP 2020 / MARKUS SCHOLZ
Islamist preacher Sven Lau aka "Abu Adam" talks during a rally on July 19, 2014 in Hamburg, northern Germany.
"In 2012, the BAMF set up the 'Radicalization' advisory body on the initiative of the Interior Ministry in order to counter the challenges in the field of Islamism and Salafism," Ritter explained.

The advisory body, which has an annual budget of €650,000 ($764,000), has a hotline which is the first port of call for relatives and acquaintances of people who may be radicalized. Their concerns are relayed to the appropriate state bodies and civil organizations.

"More than 3,600 calls have been received since the advisory body was set up. This resulted in more than 950 consultations, which were passed on to cooperation partners in civil society organizations for further action," Ritter said.