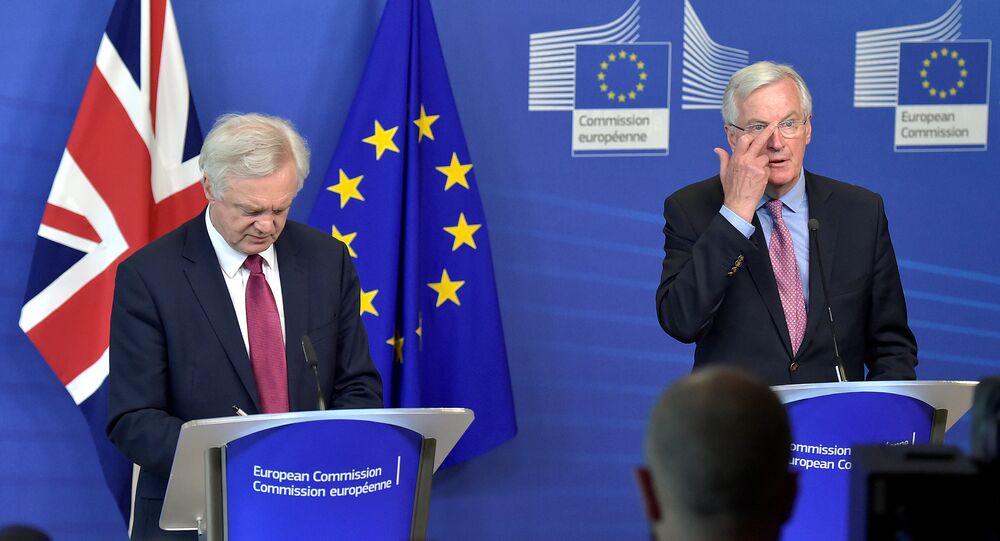 Brexit negotiations are well underway, and both the UK and the European Union are hoping for the most beneficial outcome. However a former UK civil servant has said that the talks have not had the most "promising" start.

© AFP 2020 / Matt Dunham
'Tory Infighting Is Undermining Britain's Position' at Brexit Negotiations
The UK would like to put restrictions on EU nationals entering the country following its exit from the bloc. Britain would also like to remain part of the customs union, which of course would make it easier to negotiate trade deals with other EU countries, as well as forge alliances with international parties.

The EU would like the UK to keep freedom of movement and has signaled that in case that does not happen, remaining part of the customs union for Britain would be impossible.

However, civil servant Sir Simon Fraser's latest remarks may hint at the fact that the discussions are not going as planned.

​Sir Simon, a former British diplomat, who served as the Permanent Under-Secretary of the Foreign and Commonwealth Office, has said that civil servants did not have a clear understanding or position ahead of the talks in Brussels due to differences in the cabinet.

His comments echo those made by EU's chief Brexit negotiator Michel Barnier, who said that the UK had turned up unprepared and that the two sides had conflicting ideas.

Sir Simon, who now advises businesses on Brexit, said in a recent interview that the negotiations were not going as well as many had hoped.

"The negotiations have only just begun; I don't think they have begun particularly promisingly, frankly, on the British side. We haven't put forward a lot because, as we know, there are differences within the cabinet about the sort of Brexit that we are heading for and until those differences are further resolved I think it's very difficult for us to have a clear position," Sir Simon said in a recent interview.

Sir Fraser also said that British civil servants had been "absent" from the negotiations.

It has also been revealed that London is prepared to settle the 36 billion pound (US$47 billion) "divorce bill" with the EU, if Brussels agrees to negotiate the financial settlement as part of an agreement on future UK relations with the bloc, including a trade deal.