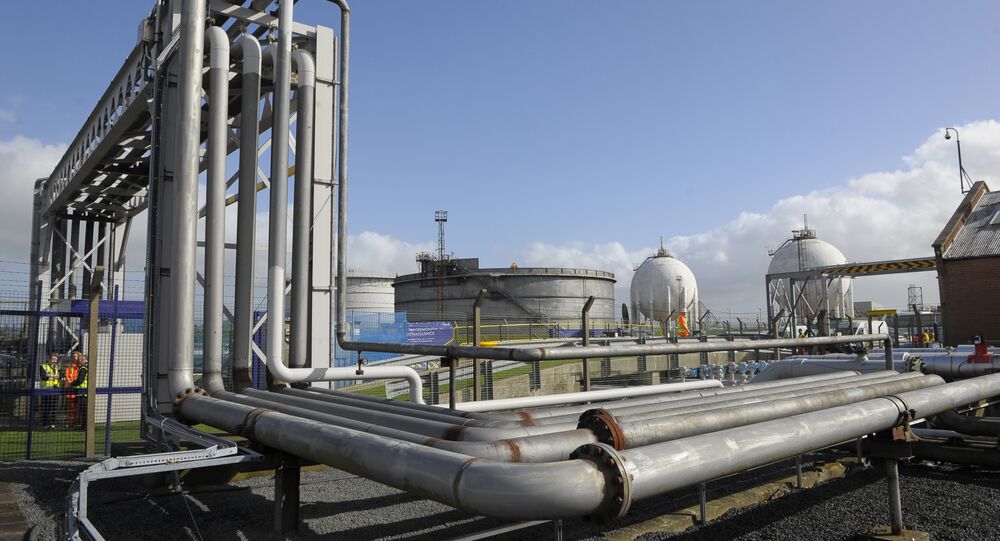 European companies could stop buying liquefied gas from the US following Washington’s decision to toughen its sanctions on Russia, French Senator Pozzo Di Borgo told Sputnik. He described Washington’s move by a desire to ramp up US fuel exports.

© Sputnik / Vladimir Sergeev
New US Anti-Russia Sanctions May Threaten EU Economic Interests
“Trade is all the American care for. They have too much shale gas and they are trying to sell it. Because the largest shale gas deposits are in Qatar and Iran, the US is forcing the Saudis to slap sanctions on Qatar. Faced with problems with Russian gas transit via Ukraine, the Europeans staked on the Nord Stream pipeline and now the Americans are introducing sanctions against Nord Stream,” Pozzo di Borgo told Sputnik France.

He believes that Europe should respond by introducing its own sanctions on the US.

“If the Europeans have the guts, they could ban their companies from buying shale gas from the US. Engie, which is a partner in the Nord Stream project, regularly buys liquefied gas from the US. This must stop!” the senator emphasized.

After Washington said that its new sanctions on Russia would impact European energy companies’ cooperation with Russia, the head of the European Commission, Jean-Claude Juncker, warned that if EU companies suffer as a result of this, Brussels would give an adequate response to the US move “within days.”

In an interview with Sputnik, former Czech Prime Minister Jan Carnogursky said that the EU’s initial reaction to the US sanctions inspired hope that Brussels would no longer toe Washington’s line the way it did before.

He added that the European’s resentment could take on a geographic dimension if the Czech Republic, Hungary, Slovakia and Austria set up an anti-sanctions bloc.

“I believe that Slovakia shouldn’t have joined these sanctions, but it simply lacked the guts to resist pressure,” Carnogursky noted.

He hopes that regardless of the US pressure, the Nord Stream 2 pipeline will be built.

“Slovakia is getting Russian gas via the Druzhba pipeline and may eventually start buying from other countries too. I still hope that Nord Stream 2 will be built and there will be enough gas for all,” Jan Carnogursky said.

So far, the German response to the US sanctions has been the most vocal with Economics Minister Brigitte Zypries slamming the US-imposed restrictions as “‘illegal.”

Her opinion was echoed by the French Foreign Ministry, which criticized the exterritorial nature of the US sanctions as absolutely impermissible.

Finnish President Sauli Niinisto described them as a dishonest attempt to cash in at “the allies’ expense.”.

Still, despite all these concerted protests, it does not look like the EU, which is trying to mend fences with Washington, is really prepared to go too far in standing up to Washington.

© RIA Novosti . Vladimir Sergeev
EU Slams US' Russia Sanctions to Damage Trump – Lombardia-Russia Cultural Association
Manolo Monereo, a Spanish MP representing the left-wing Podemos party, told Sputnik that he did not expect any clear-cut response from the EU, which he said is unable to pursue an independent policy.

The sanctions target Russia's defense, intelligence, mining, shipping and railway industries and restricts dealings with Russian banks and energy companies. The bill also stressed that the United States would continue to oppose the construction of the Nord Stream 2 natural gas pipeline.

The bill has been criticized by the European Union, particularly due to concerns that the new sanctions will impact its economic interests, especially its energy cooperation with Russia.

France and Germany have spoken out against the bill as it affects European industries while advancing US commercial interests.