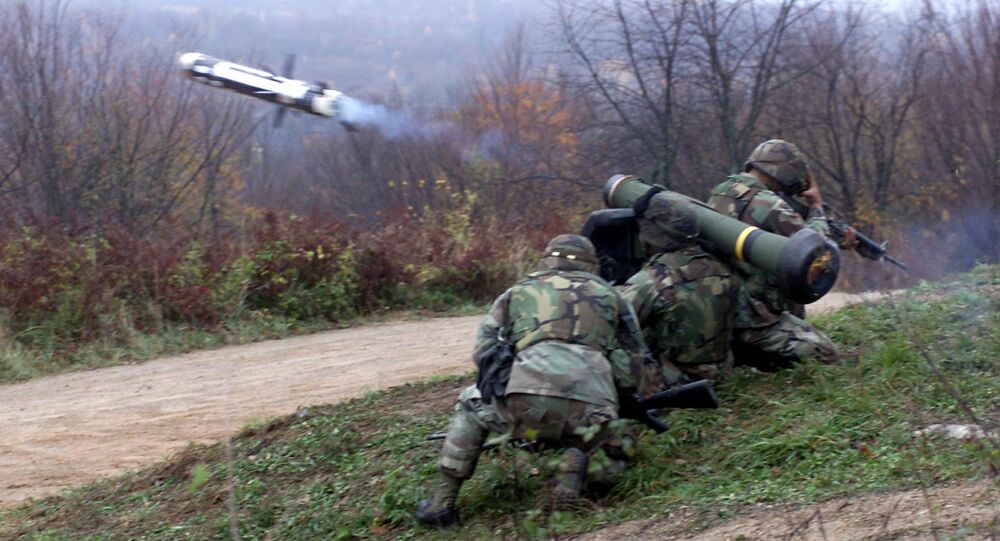 Oil on Flames: Why is US Sending Arms to Ukraine?

The Pentagon and the US State Department have prepared a plan to supply Ukraine with antitank missiles and other weaponry. In an interview with Sputnik, political analyst Alexander Khrolenko said that by designating Russia as a party to the conflict in Donbass, the US is arming Kiev and prodding it to wage a “hot war” with Russia.

Kurt Volker, the recently-appointed US special representative to Ukraine, said last week that the conflict in eastern Ukraine was a "hot war," and that Washington should deliver lethal weapons to Kiev to “stop Russia.”

He added that it was the only way to restore the territorial integrity of the Ukrainian state.

© AP Photo / Evgeniy Maloletka
Russian Official Warns US Arms Deliveries to Ukraine Will Fuel War
The United States has already spent $22 million on a Ukrainian army center near Lviv, and is going to line up an additional $20 million to set up several commando training centers elsewhere in the country.

For 2018, Washington has earmarked $410 million to boost Ukraine’s defense industry – more than three times more than it allocated in its budget for  2017. Alexander Khrolenko warns that Washington’s “Ukrainian project” is fraught with unpredictable consequences for all.

Who is Helping Whom

In an interview with a Ukrainian news site, the top US military commander in Europe, General Ben Hodges, said that the Americans were learning much from Ukraine’s experience “fighting Russia”.

“We have learned a lot watching [the Russians] using their electronic capabilities in the Ukraine. Any time the Ukrainians tried to do something the Russians were able to detect that and shoot very quickly,” Hodges said.

When asked whether the US and NATO would help Ukraine in the event of a war with Russia, the general said that he was “not authorized to think.”

He described the 300 US troops permanently stationed in Ukraine as a hell of a mighty support as it is.

It looks like the US will provide as much weaponry to Kiev as it could possibly need to in the event of a serious armed conflict with Russia.

Since the start of the military reforms in Ukraine, NATO has trained 1,200 Ukrainian military instructors.

Still, neither the US nor its NATO allies are going to fight for Ukraine because Russia’s political position and military potential will remain unchanged no matter what, Khrolenko wrote.

He added that in the event of an escalation of the conflict in Donbass, Russia might officially recognize the Donetsk and Lugansk People’s Republics, which will then be able to give adequate response to the US–armed Ukrainian forces.

Meanwhile, Russia’s Deputy Foreign Minister Sergei Ryabkov warned that Moscow was not ruling out any steps “to bring the US to its senses.”

Russia has warned the countries trying to play a role in the settlement of the conflict in eastern Ukraine to avoid doing anything that might provoke a new spiralling of tensions.

Almost simultaneously, an official representative of the Donetsk People’s Republic warned that US arms supplies to Ukraine would be a major mistake by the Trump Administration.

Meanwhile, many European politicians, including the chairman of NATO’s Military Council, Petr Pavel, have spoken against US arms deliverers to Kiev.

© REUTERS / Valentyn Ogirenko
US Arms Supplies to Ukraine: Poroshenko May Escalate Donbass War to Win Election
Moreover, the EU is preparing a list of measures in the event of additional US sanctions against Russia that would harm the Europeans’ energy cooperation with Moscow.

The Pentagon’s confrontational way of dealing with Russia could backfire, forcing Moscow to use preventive action, just as its military doctrine prescribes, Alexander Khrolenko concluded.

On Monday, The Wall Street Journal reported that the US defense and diplomatic establishment had devised a plan to supply lethal arms to Ukraine.

The weapons, characterized as “defensive”, may include Javelin man-portable anti-tank missiles, anti-aircraft weapons, and other advanced arms.

According to the newspaper, US officials want to make the weapons delivery contingent on them being deployed away from the frontline in the war-torn Donbass region in eastern Ukraine.

Fighting between the Ukrainian army and pro-independence militia in the Donbass intensified last month; several dozen combatants were killed and dozens more were wounded in July.

Both sides have issued recriminations against the other for the escalation, with Donbass officials also accusing Kiev of indiscriminately targeting civilian areas with artillery shelling.