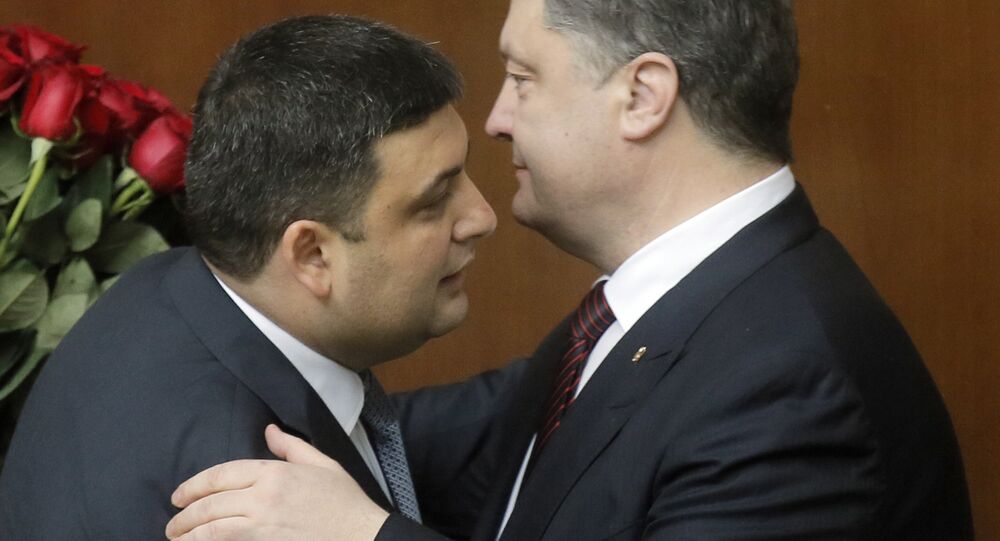 Ukrainian Prime Minister Volodymyr Groysman believes that the right economic reforms can transform Ukraine beyond recognition and turn it into 'the most successful country in Europe.' Ukrainian political analyst Alexander Dudchak says the opposite is true - that Ukraine's economy will continue to collapse so long as it is run by 'economic hitmen'.

Speaking to Ukrainian business weekly Delovaya Stolitsa about his government's economic policies, Ukrainian Prime Minister Volodymyr Groysman said he was confident that carrying out the right reforms would "completely change Ukraine and turn it into the biggest success on the [European] continent" and lead to an accelerated economic growth rate of at least 5% per year.

© AP Photo / Mstyslav Chernov
Ukraine's Move to American Thermal Coal to Boost US Economy - White House
Two weeks before, the prime minister had warned that the country did not have enough money in the budget to carry out necessary reforms, since most of the budget is being spent on servicing foreign debt (4% of GDP), defense (5% of GDP) and the deficit in the pension fund ($5.5 billion). According to Groysman, the country's foreign debt has crept up to over 80% of GDP, which experts say will lead the country to default by 2019 if growth doesn't pick up.

Asked to comment on Groysman's latest remarks, Ukrainian political scientist Alexander Dudchak said that the prime minister's strategy seems to have shifted to 'storytelling' to convince Ukrainians that overall, everything is fine, even while the real economic picture continues to deteriorate.

"Kiev has been turning Ukraine into god knows what for three years now," the observer recalled. "This is a government of 'hitmen' and storytellers: they are deliberately killing the economy by foreign degree, getting certain personal bonuses for doing so. At the same time, they are trying to tell ordinary Ukrainians that any problems they have are their personal problems, and that on the whole, the situation in the country is fine. Ukrainians are supposed to see themselves as defective, as some kind of losers…"

© AP Photo / Czarek Sokolowski
'Who Will We Blame For Genocide Then?' Ukraine's Depopulation Gets Poles Anxious
Furthermore, Dudchak explained that "if something goes wrong, the Groysman government, like the government of [ex-Prime Minister Arseniy] Yatsenyuk before it, will be able to say that it had wonderful ideas, but that their implementation was a bit of a failure, caused by external enemies, the fifth column, extraterrestrials," or anyone else except themselves.

At for the prime minister's promises of 5% GDP growth, this was just a pipedream, Dudchak said.

"Of course all of these fairytales will remain just that. The current government understands perfectly well that their time is limited. They aren't worried about what will happen in three or four years, because they think they won't be held accountable for it. And Groysman himself can tell such fairy tales, because he will always have the opportunity to say that he was not allowed to carry through with his plans to the end…Therefore, these words [about 5% GDP growth] are just that – words."

© Sputnik / Andrey Stenin
'Marshall Plan' for Ukraine: Illusions of Economic Recovery
The IMF expects Ukraine's GDP to grow by 2% in 2017. The country's GDP stabilized at 1.1% growth in 2016, after a drop of nearly 17% between 2014 and 2015, the second-worst multiyear decline in Ukraine's history.

The reported economic stabilization has been of little comfort to ordinary Ukrainians. According to a recent poll by Rating Group Ukraine, 75% of Ukrainians believe their country is 'in a state of collapse'. 60% said they cannot afford to pay their utility bills. 97% said they have been personally affected by price hikes for consumer goods and services. 70% said they fear the situation may lead to large-scale protests like the ones which rocked the country in 2004 and 2014 and precipitated the Orange Revolution and the Maidan coup d'état.