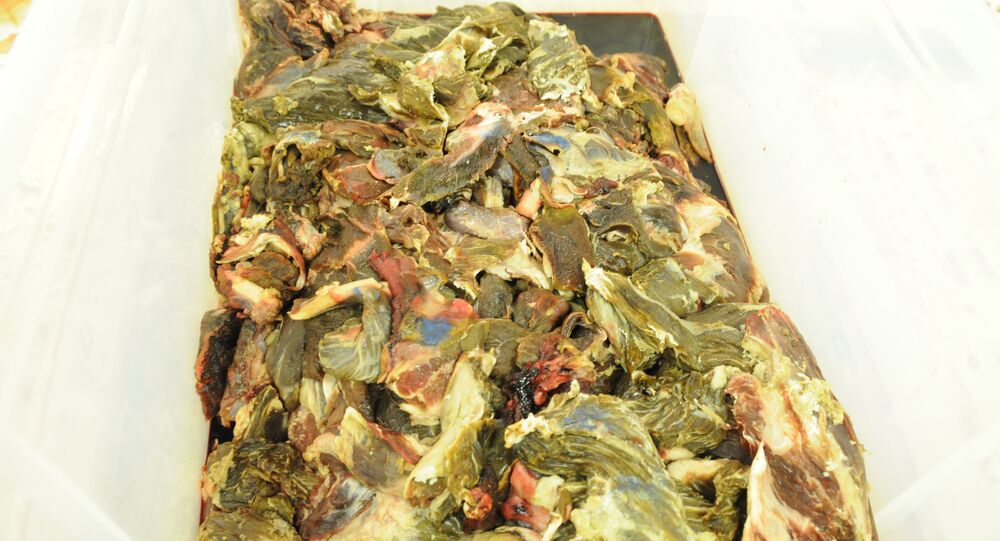 Two businessmen who increased their profits by using horsemeat instead of beef have been sent to jail in Britain. The judge sentencing them acknowledged there were many others involved in the same scandal, which hit the headlines in 2013.

Andronicos Sideras, 55, from north London, was jailed for four-and-a-half years on July 31 after being convicted last week of conspiracy to defraud by a jury at Inner London Crown Court.

​Ulrik Nielsen, 58, from Gentofte in Denmark, was jailed for three-and-a-half years after pleading guilty to the same offense and Alex Beech, 44, from Humberside, was given a suspended sentence.

The court heard Nielsen ran a Danish company called Flexi Foods, which sold meat to Sideras' company, Dino Foods, who made sausages, pies and other products for a number of retailers. Beech worked for Sideras.

At the time beef was being sold for three euros (US$3,5) per kilogram and horsemeat was sold — mainly to the French market — for two euros (US$2,4) per kilogram.

So by using large amounts of horsemeat, mixed in with the beef, Nielsen and Sideras were able to boost their profits.

​But the game was up for them when identification microchips belonging to a number of horses were found inside the meat when their premises were raided.

The chips are routinely inserted under the skin of horses so they can be traced if they are stolen.

Chips found in the "beef" identified it as coming from two horses called Wiktor and Trak from the city of Lodz in Poland, and an Irish horse called Carnesella Lady from County Galway.

Sentencing the pair, Judge Owen Davies QC, said he did not consider it a mitigating factor that they were not the only meat dealers in the European Union involved in the racket.

"It was not confined to this country, not confined to the firms we have heard about, and it's a big issue for the public to be concerned about, but the fact is it was discovered by accident and only emerged as a problem because of your activity," he told them.

The scandal involving horsemeat emerged in January 2013 when Irish food inspectors announced they had found horsemeat in frozen beefburgers made by firms in the Irish Republic and the UK, and sold by supermarket chains, including Tesco, Iceland, Aldi and Lidl.

© Photo : City of London Police
This meat was sold as "beef" but it contained a tiny microchip which showed it was from a horse.

Many companies then carried out tests on their own products and recalled beef ready meals, such as lasagne, after tests found they contained horse DNA.

Horsemeat is not in any way harmful, but it is considered taboo in many countries and to sell it as beef is classed as fraud.

The City of London Police, who were brought in by the Food Standards Agency to investigate, said their enquiries was complex and had involved visits to Denmark, Ireland, Poland, France, Holland and Italy.

"This is a clear case of fraud; the fact that the case revolves around meat and the food chain makes no difference to this crime.  A lie is a lie whatever the circumstances," said Detective Constable Stephen Briars, from City of London Police's Fraud Squad.

"These three men set out to deceive the suppliers, retailers and ultimately the consumer so that they could make more money," he said.

Andronicos Sideras, Alex Beech and Ulrik Nielsen all found guilty to conspiracy to defraud after adding #horsemeat to the food chain. pic.twitter.com/dVt51pPGCz

"This case has involved a real team effort with staff from the City of London Police, working closely with our partners from local authorities, the Food Standards Agency, and the food industry to gather the evidence necessary to prove this unique and challenging case," added Detective Con Briars.

Several other prosecutions and civil lawsuits in other parts of Europe are pending as a result of the horsemeat scandal.

Meat company Findus France claimed at the time it had been the victim of fraud and would take action against its supplier Spanghero, which itself blamed a Romanian abattoir which supplied it with what it thought was beef.

The European Commission has made a series of changes to the regulations surrounding meat as a result of the scandal.