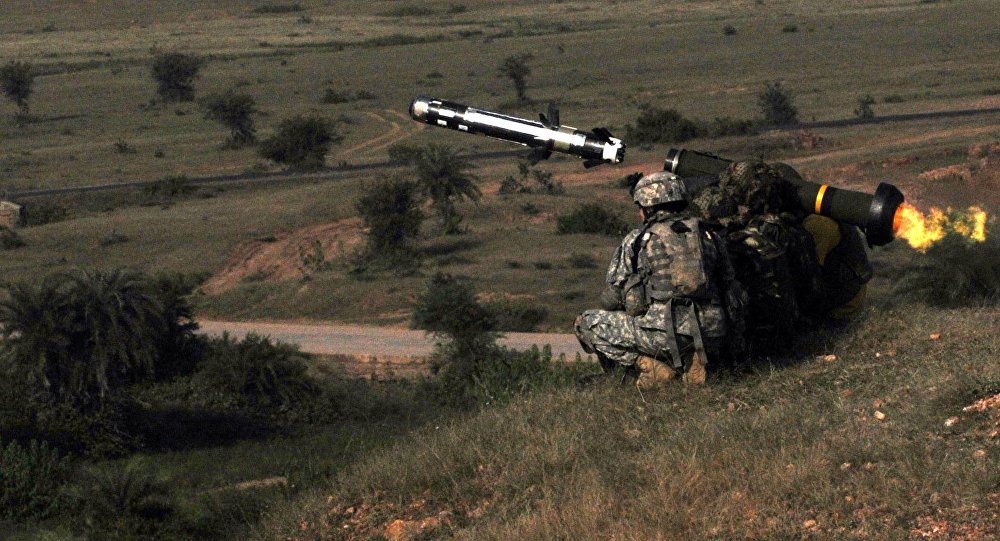 The Wall Street Journal has reported that the Pentagon and the US State Department have come up with a plan to supply Ukraine with deadly weapons, and that this plan is now awaiting White House approval. Speaking to Sputnik, Ukrainian political scientist Ivan Mezyuho warned that Kiev could use such weapons far beyond the war-torn Donbass region.

On Monday, WSJ reported that the US defense and diplomatic establishment had devised a plan to supply lethal arms to Ukraine. The weapons, characterized as 'defensive', may include Javelin man-portable anti-tank missiles, anti-aircraft weapons, and other advanced arms. According to the newspaper, US officials want to make the weapons delivery continent on them being deployed away from the frontline in the war-torn Donbass region in eastern Ukraine.

© AFP 2019 / OLEKSANDR RATUSHNIAK
Pentagon Reportedly Devises Plan to Arm Ukraine With Antitank Missiles
The US Joint Chiefs of Staff and Defense Secretary James Mattis support the plan, and it now awaits the approval of by President Trump, who has yet to be briefed on its details. Officials told WSJ that a final decision from the president could take as long as several months to secure.

The plan is supported by Kurt Volker, the recently-appointed US special representative to Ukraine, who said last week that the conflict in eastern Ukraine was a "hot war," and that Washington should deliver lethal weapons to Kiev to "stop Russia."

Fighting between the Ukrainian army and pro-independence militia in the Donbass intensified last month; several dozen combatants were killed and dozens more were wounded in July. Both sides have issued recriminations against the other for the escalation, with Donbass officials also accusing Kiev of indiscriminately targeting civilian areas with artillery shelling.

© Sputnik / Sergey Averin
A local woman near a house damaged by artillery shelling in Aleksandrovka village in the Donetsk Region.

Ukrainian political scientist Ivan Mezyuho says he cannot dismiss the possibility that the 'anti-Russian hysteria' prevalent in Washington at the moment might induce the US to go ahead and deliver the weapons.

"I cannot exclude the supply of new weapons by the US to Ukraine, given the anti-Russian hysteria that prevails in Washington, including in the ranks of the Republican Party. Of course, I doubt that the Americans could completely satiate the appetites of the Ukrainian military, but some types of US armaments may indeed be delivered to Kiev," the commentator said, speaking to Radio Sputnik.

© Sputnik /
War is Peace: US Deploys New Form of Hybrid Aggression in Ukraine Against Russia
"Moreover, such weapons may be supplied on the condition that instructors from the US, rather than Ukrainian [servicemen], manage them directly," Mezyuho added.

The expert warned that the supply of such US weapons would undoubtedly exacerbate the situation in the hot spots both in and around Ukraine.

First of all, "Ukraine would like to use the US weapons in the so-called 'anti-terrorist zone' [in the Donbass]," Mezyuho said. Second, "given that Kiev's actions are completely unpredictable, the weapons from abroad might find their way even to the border with the Transnistrian Moldovan Republic," (another breakaway territory in neighboring Moldova) where Russian peacekeepers are present, he added.

© Flickr / Dieter Zirnig
Border between Transnistria and Moldova
© AP Photo / Andrew Kravchenko, Pool
US 'Should Take a Look in the Mirror' Before Blaming Russia for Ukrainian Crisis
Last week, former CIA officer and counterterrorism specialist Philip Giraldi told Sputnik that whatever officials say, it would be impossible to actually prevent US weapons in Ukraine from being used for offensive purposes. For example, "on the ground, tank destroying missile systems would by their very nature be quite usable in an offensive, mobile fashion to neutralize any advantage in armor," he stressed.

Moreover, Giraldi warned that although the Pentagon might try to keep tabs on the weapons to prevent them from falling into the hands of unauthorized users, past experience has shown that such provisions are "nearly impossible to enforce." The situation on the ground in eastern Ukraine is not exactly cause for optimism, the analyst said, given the presence of local militias. Ukraine's use of mercenary fighters and so-called nationalist battalions is another concern.

© AFP 2019 / ANATOLII STEPANOV
A Ukrainian serviceman prepares ammunition in Avdiivka, Donetsk region on March 30, 2017
© AFP 2019 / ANATOLII STEPANOV
Weapons to Kiev? Kremlin Warns Against Actions Which May Lead to East Ukraine Escalation
Ukraine has faced a civil war in the Donbass region since April 2014, when the government sent the army to try to crush an uprising in the country's southeast by locals who refused to recognize the coup-installed government in Kiev. In February 2015, Kiev and Donbass militias signed a ceasefire deal. Since then, both sides have accused one another of violating the deal, and Moscow has accused Kiev of deliberately stalling the implementation of its provisions to establish a lasting peace in the region.

Moscow has repeatedly warned against the delivery of US weapons to Ukraine, stressing that doing so would only escalate the deadly conflict.