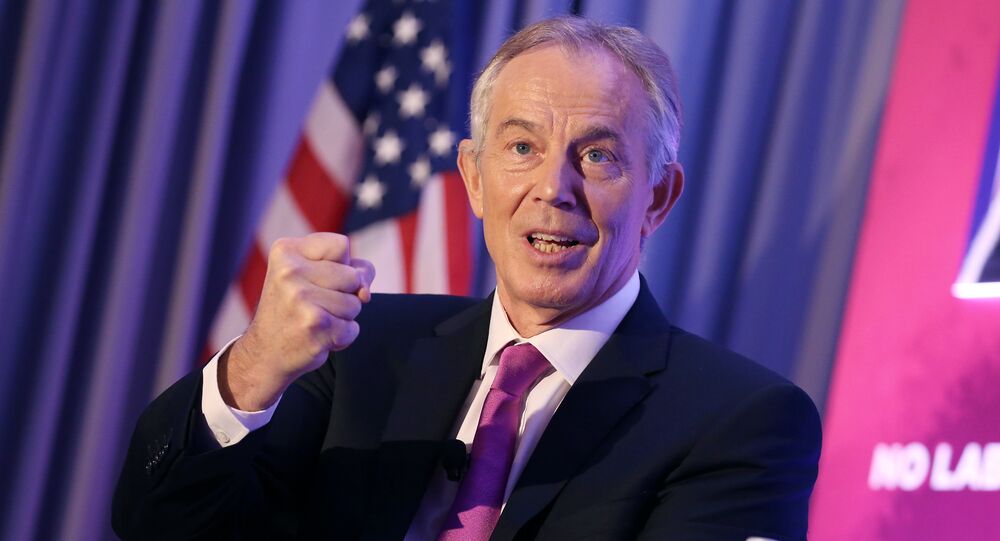 The High Court has blocked a bid by a former chief of staff of the Iraqi army, General Abdul Wahed Shannan Al Rabbat, to bring a private prosecution against Tony Blair over the 2003 Iraq War, an alleged “crime of aggression” that may have claimed a million lives. Members of the public interviewed by Sputnik have responded negatively to the news.

The UK was a leading member of the US-led coalition that invaded Iraq on the pretext Hussein possessed weapons of mass destruction and had connections to terrorist groups and attacks.

Now however, it seems no one will face judicial scrutiny for their role in planning and executing the conflict — after months of speculation and legal wrangling, Lord Chief Justice Thomas of Cwmgiedd and Justice Ouseley dismissed the former General's application, saying there was "no prospect" of the case succeeding.

"Bush and Blair started the war, and they said Iraq had weapons of mass destruction. Then they discovered Iraq had nothing. Blair has apologized for this, but that's not acceptable — lots of people died and lost their families. If this happened in a Western country, it would be a big deal, but in Iraq nobody cares. Blair should be tried," a member of the public told Sputnik.

"This is protecting elites and their reputations, not actual people. The war was terrible. It's disturbing people in such high positions did this," said another.

© AFP 2021 / Maurice McDonald
British Vets May Face War Crime Charges Over Iraq Conflict
The general, who resides in Muscat, Oman and does not possess a passport to allow him to travel to the UK, wished to prosecute Blair and two other key ministers at the time — Jack Straw, then-foreign secretary, and Lord Goldsmith, then-attorney general.

His lawyers asked London's High Court for permission to seek a judicial review in an attempt to get the Supreme Court, the UK's highest, to overturn a ruling by the House of Lords in 2006 that there was no such crime as the crime of aggression under the law of England and Wales.

Chris Nineham, a spokesperson for Stop the War, says the ruling will undoubtedly be contentious.

"People will be cynical, there's been a series of attempts to prosecute Blair which have been blocked. He bears massive responsibility for this, he was the main architect and motivator. He was isolated in the establishment in the time — while in the US the entire establishment was on board, in the UK Many had big concerns, but he drove it through, and lied to the cabinet, parliament and the public to do so. Although, those who did have doubts here didn't speak up — so I'd say the whole UK political, military and intelligence establishment, bar the MPs that voted against the war, bear some culpability," Mr. Nineham told Sputnik.

Mr. Nineham added that the ruling may not be the last word on Blair's culpability for war crimes — he believes UK courts to be highly political, and easily swayed by the politics of the day.

"There's a changing mood in Britain about foreign policy and in future those responsible for Iraq could indeed face prosecution."

In the case — "R v. Jones" — which also concerned the Iraq War, the Lords found that although there was a crime of aggression under customary international law, there was no such crime under English law.

This stance was seemingly directly undermined by Goldsmith himself prior to the war — in a memo on the legality of the conflict penned a fortnight before the invasion, Goldsmith acknowledged wars of aggression were a crime "under customary international law" which "automatically" forms part of domestic law in every country in the world.

© REUTERS / Peter Nicholls
The War on Iraq in 2003 Was and Will Always Be a Crime
​The notorious Downing Street memo, a record of a meeting in July 2002, perhaps inarguably demonstrated that Blair and others knew the decision to invade Iraq had been made long before its justification was determined.

In it, Sir Richard Dearlove, then-director of MI6, told Blair and others that in Washington, "military action was now seen as inevitable."

Straw added the case for the war was "thin."

"Saddam is not threatening his neighbors, and his WMD capability is less than that of Libya, North Korea or Iran. We should work up a plan for an ultimatum to Saddam to allow back in the UN weapons inspectors. This would also help with the legal justification for the use of force," the then-foreign secretary said.

While the legal team tried to counter-argue the Jones' case was wrongly decided and permission should be given to allow General Al Rabbat to reargue the issue before the Supreme Court, the High Court ruled decisively that there was no prospect of that court finding the decision in that case erroneous, or the reasoning that underpinned it no longer applicable.

Moreover, Westminster Magistrates Court refused to issue summonses in November 2016 for the accused, on the grounds ex-ministers had immunity from legal action. In any event, current Attorney General Jeremy Wright QC made clear he would refuse to give consent.

Wright directly intervened in the case, with his legal team urging Lord Thomas and Justice Ouseley to block the legal challenge on the grounds it was "hopeless" and unarguable.

Mansfield said the main findings were contained in a paragraph early in the 12-volume report, and could be summarized as concluding Hussein did not pose an urgent threat to the interests of the UK, peaceful alternatives to war had not been exhausted, intelligence regarding weapons of mass destruction had been presented with "unwarranted certainty" and the war was not necessary.

He also argued the international crime of waging wars of aggression had been accepted by then-UK Attorney General Sir Hartley Shawcross QC in the 1940s, at the time of the Nuremberg trials of Nazi war crimes.

Despite the failure of prosecution, some sources suggest the war was very much a war crime — according to a detailed investigation conducted by an independent commission established by the government of the Netherlands, the invasion was a clear breach of international law.

The commission found UN resolution 1441 "could not be reasonably be interpreted" as authorizing member states to use military force to compel Iraq to comply with the Security Council's resolutions.