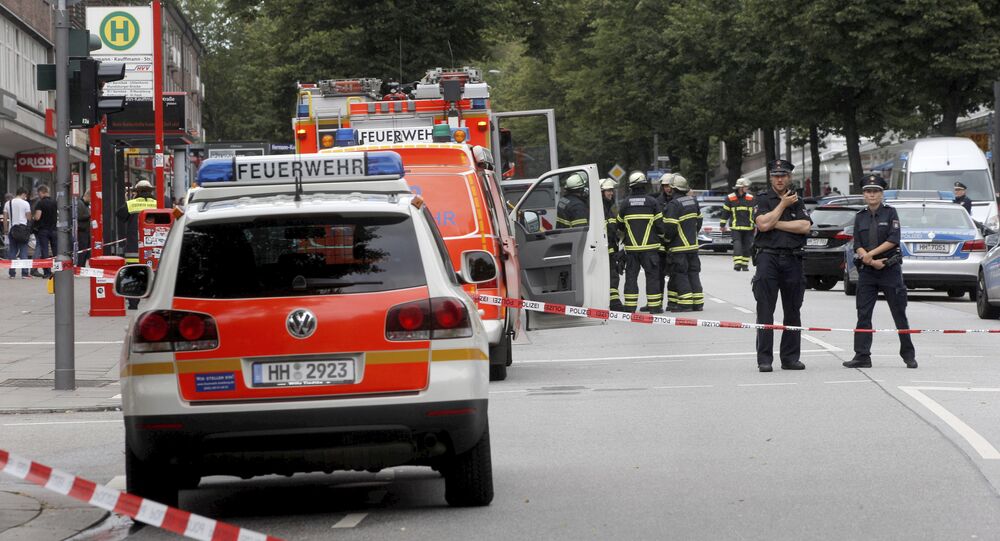 The knife-wielding man who attacked a supermarket in Germany's Hamburg was known by authorities as an Islamist, Hamburg's federal state interior minister said.

© AP Photo / Michael Probst
German Police Search Refugee Shelter Linked to Hamburg Knifeman
On Friday, a Hamburg knife attack left one person killed and at least 6 others injured; the perpetrator was arrested. Later police said that the perpetrator was a lone wolf attacker.

According to the Bild newspaper citing witnesses, the attacker shouted "Allahu Akbar." The attacker's motive so far has been unclear. A representative of the police press service told Sputnik that it is unclear whether the incident is a terror attack.

"The attacker was known to the security agencies as an Islamist, but not as a jihadist," Andy Grote, Hamburg's federal state interior minister, said at a press conference on Saturday, adding that there were indications that the man could have religious, Islamist motives for the attack but at the same time the man had psychological issues.

© REUTERS / Ina Fassbender
One Killed in Supermarket Knife Attack in Hamburg, Perpetrator Arrested (PHOTO, VIDEO)
The official noted that despite being considered ato be an Islamist, the man was not viewed as dangerous.

The man, born in the United Arab Emirates, was a failed asylum seeker and was targeted for deportation, but since he had no identity documents his case had been put off. He stabbed a 50-year-old German man to death at an Edeka supermarket and injured six others.

Later on Friday, German police conducted a security operation at a shelter on Hamburg’s northern outskirts linked to the failed asylum seeker who stabbed a person to death in Hamburg.

The supermarket incident is another instance in a series of Islamist knife, ax and truck attacks in Germany that have left dozens of people dead or wounded since last year.

One Killed in Supermarket Knife Attack in Hamburg - Police