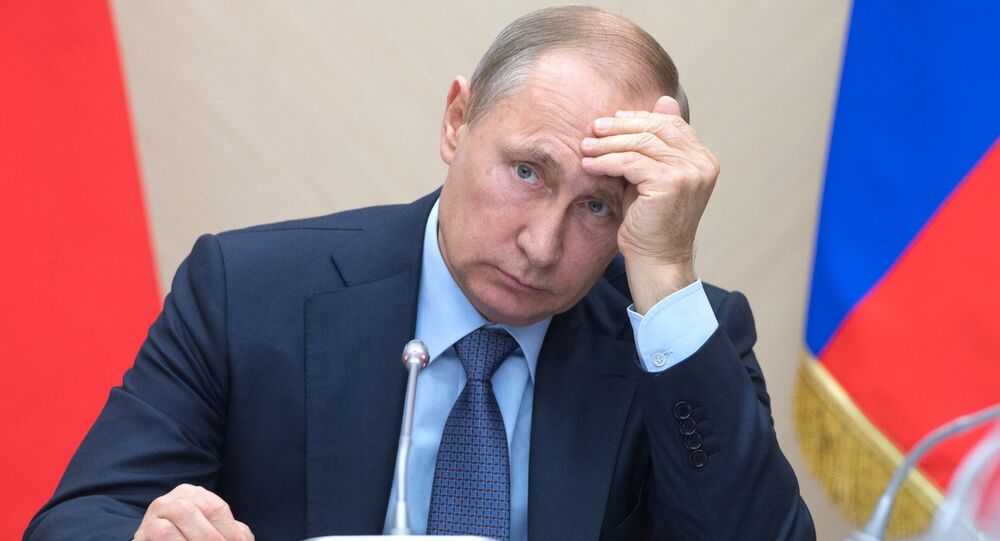 In the latest instalment of #RussiansDidIt, Russian hackers are again claimed to have interfered in French President Emmanuel Macron's election campaign, this time with a strange new twist – agents in the GRU, Russia's military intelligence unit, created fake Facebook profiles to spy on campaign officials.

Allegedly, around two dozen accounts on the social network were created by Russian intelligence operatives in order to conduct surveillance on Macron campaign officials, and others close to the former financier as he battled nationalist Marine Le Pen and other opponents in the two-round election.

© Sputnik / Irina Kalashnikova
En Mache! leader Emmanuel Macron during a speech outside Louvre after winning French presidential election
© Photo : Jaclyn O'Laughlin
Ex-US Homeland Security Chief Dismisses Claims Russia Meddled in 2016 Election
As has been the case in every claimed instance of Russian interference into affairs of other nations, the claims come from unnamed sources, and are presented without a shred of supporting evidence — anonymous US Congressman are said to have been briefed by Facebook officials that agents posed as friends of friends of Macron associates, and attempted to glean personal information from them. The social media giant is also said to be confident the purported spies failed in their apparent mission.

The charges seem somewhat unbefitting of Russian intelligence agents — after all, Western media and politicians have repeatedly painted the GRU as an extremely cunning, tech-savvy, borderline omnipotent agency, capable of throwing results of referenda, and major hacking feats, with but a few mouse clicks.

​By contrast, this supposed operation's tactics appear immediately amateurish and unambitious, and almost inevitably doomed to failure.  How could (and indeed why would) an agency that is said to have been able to break in to the Democratic National Convention's email servers resort to such an inauspicious, sloppy and unenterprising ruse?

© AFP 2021 / VASILY MAXIMOV
Paris Does Not Want to Isolate Russia Politically, Economically - French FM
Still, suggestions of Russian involvement in the French election are nothing new — in fact, they dogged campaign from its very beginning, although eerily and promptly vanished from mainstream discourse as soon as Macron won by one of the biggest landslides in French democratic history. The ensuing media blackout on the non-issue was so determined, the very outlets that had so confidently and consistently trumpeted the claims largely ignored the Chief of France's National Agency of Information Systems Security acknowledging in June there were no traces of Russian meddling in the election whatsoever.

The obvious question is why the evidently fictional meme of Russian meddling in the French election is being placed back on the media agenda. One answer may lie in Macron's actions since the election — particularly his May meeting with Russian President Vladimir Putin.

At the summit, the pair agreed to work constructively on a number of issues — ever since, the French President has done and said a number of things that have undoubtedly served to enrage anti-Russian forces. For one, the pair agreed to work together against the threat of cyberattacks, but most critically, Macron has acknowledged Putin was right all along, and Syrian President Bashar al-Assad must stay in office. The historic U-turn means a likely end to the vicious war that has been waged by foreign powers on Assad's Syria since 2011, and leaves countries still committed to regime change in an increasingly slim minority.

© REUTERS / Philippe Wojazer
French President Emmanuel Macron shakes hands Russian President Vladimir Putin (L) at the Chateau de Versailles as they meet for talks before the opening of an exhibition marking 300 years of diplomatic ties between the two countyies in Versailles, France, May 29, 2017

As a result, it may be sowing discord and division between the two freshly confirmed allies is a top priority for certain hostile elements in the West. Should France's constructive relationship with Russia deepen further, stories of GRU meddling in the French election in Macron's favor could even begin to circulate.