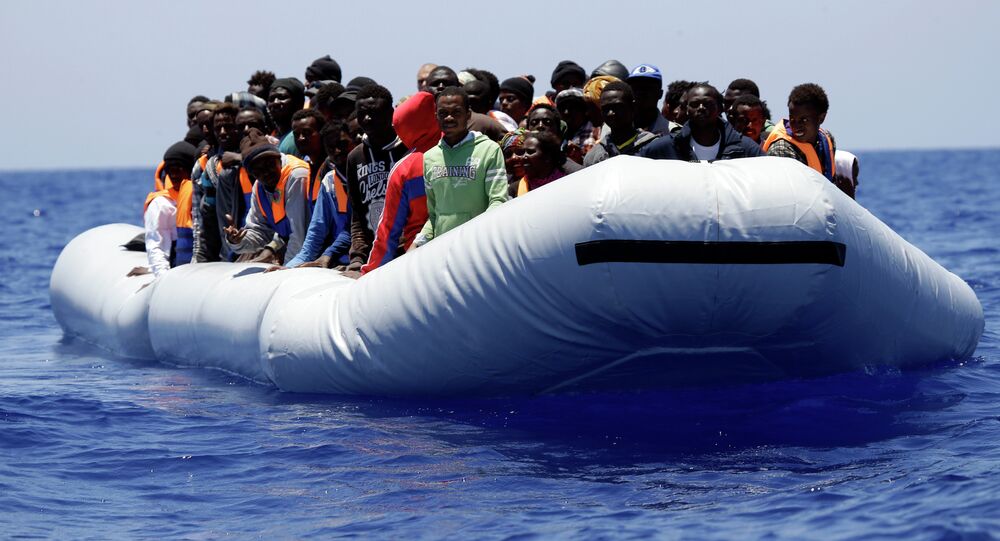 Of late, the EU has launched a series of measures aimed at stopping or at least slowing down the flow of migrants across the Mediterranean, including a ban on the export of rubber boats to the African country of Libya. According to a Norwegian researcher, though, the EU's measures are rather meaningless, as human smugglers cannot be stopped.

© AFP 2021 / Abdullah ELGAMOUDI
Last Drop: Danes Want to Penalize Migrant-Smuggling NGOs
According to researcher Morten Bøås of the Norwegian Institute of International Affairs, it requires more than a ban on rubber boats and a strengthening of the Libyan Coast Guard to stop the human smugglers operating in the Mediterranean Sea.

Firstly, it's not just about Libyan smugglers. Instead, there is a combination of various actors ranging from Ethiopians and Eritreans to the Italian mafia and international gangs, Bøås pointed out.

Secondly, even if some of the networks were to be stopped, new ones will always pop up in their place, as the demand for illegal trans-Mediterranean travels is sky-high.

"Why even bother with cocaine, when profits in people smuggling are much higher and it is much easier to avoid being taken. Those who regard the migrant crisis as a purely trafficking-related problem and believe it can be stopped are wrong," Morten Bøås told Norwegian national broadcaster NRK.

"I believe many countries are still hoping that a new strong leader will grow, similar to what Libya had during the Gaddafi rule," Morten Bøås aruged.

Since the West-induced lynching of Muammar Gaddafi, Libya has become a failed state, awash with arms and reportedly a safe haven for terrorists, including Daesh (ISIS/ISIL). According to Bøås there are at least two or three governments in Libya, depending on who you ask — in addition to a myriad of armed groups and militias, which makes the country a perfect place for smugglers to operate. Bøås argued that no European authority is capable of stopping this and even if one somehow manages to stifle the influx from Libya, new alternative routes will always appear.

Nor is Bøås particularly enthusiastic about the EU's partnership agreements with African countries, such as Guinea, which remains an important contributor to the migrant crisis. There is no war or conflict in Guinea other than perennial political unrest, which does not entitle Guineans to asylum rights.

© AFP 2021 / ODD ANDERSEN
Norway Flooded by Fake Tourists Applying for Asylum
Bøås pointed out that making the migrant boats swing around is not an option for simple humanitarian reasons.

"Then you might as well start shooting holes in them," Morten Bøås said, implying the scarce chances of making a return journey unscathed.

This year, more than 85,000 migrants, mostly from sub-Saharan Africa, have been pulled from the sea while trying to make the perilous crossing. At least 2,000 have drowned during the journey in rickety boats. In 2016, more than 5,000 people drowned in the Mediterranean in an attempt to reach Europe, according to the International Organization for Migration (IOM).

​According to Bøås, Europe should rather go by itself instead of seeking solutions across the Mediterranean. Bøås called for a clear joint agreement on sharing the burden in an even way through fair distribution, and the effective return of those who cannot stay.

"The migrant crisis is here to stay. It's global and it's hard. It cannot be stopped in the near future," he says.

Danes Cheer as Their Country Gets Invaded by Foreign Predators