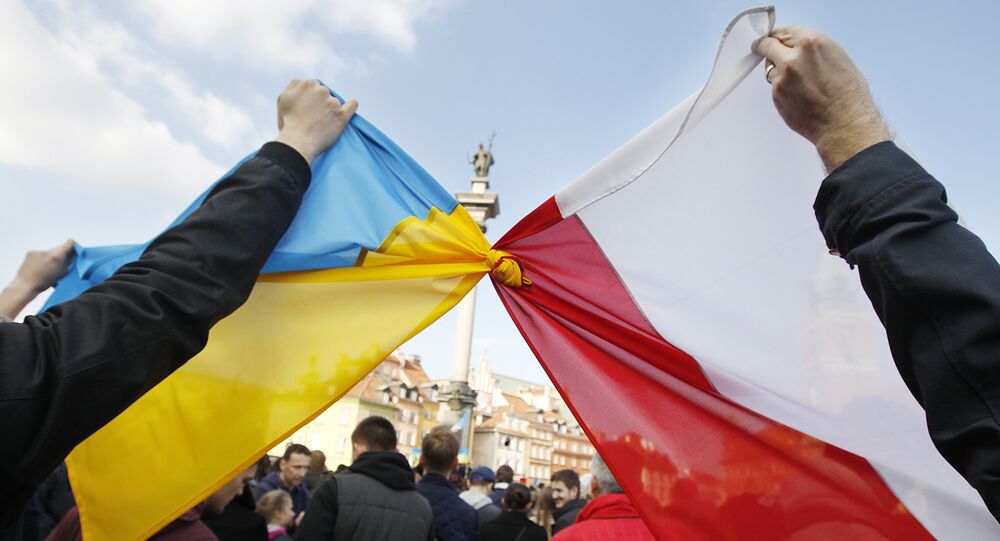 The UN's recent population prognoses make worrying reading for Poles; after being disturbed by the forecast sharp fall in the Polish population, they have turned their attention to the "turbo-depopulation" of neighboring Ukraine, which could have serious geopolitical consequences.

© Sputnik / Dmitry Korobeinikov
War Scars: Polish Archeologists Discover Wreckage of Soviet WWII-Era Fighter Plane
The latest UN population forecasts make for grim reading in Poland, as they forecast that the country's population will shrink by 44 percent to just over 21 million by the end of the century. By 2050, Polish society will be one of the oldest in the EU, with a median age of 50, the fifth-highest in the bloc.

The startling figures have led Polish analysts to examine ways of defusing this demographic time bomb. One million Ukrainian migrants currently live in Poland, and it has been suggested they could fill the gap, particularly given Warsaw's staunch opposition to taking in Muslim refugees.

"Migrants are always relatively young, but if somebody wants to think that the influx of Ukrainians will fill the demographic gap in Poland, they are mistaken," Joanna Tyrowicz of Warsaw University's Faculty of Economic Sciences told Poland's WP Wiadomosci news website.

The expert added that the UN had also made dire predictions about the demographic situation in Ukraine, which is on the list of countries where the "demographic bomb is ticking the fastest."

Indeed, the demographic projections of neighboring Ukraine are a bigger problem for Poland than the falling number of Poles, Polish military expert Andrzey Talaga, director of strategy at Warsaw Enterprise Institute, warned in an op-ed piece for Poland's Rzeczpospolita daily.

According to Talaga, a growing economy will allow Poland to boost its birthrate by spending more money on financial incentives for having children, but Ukraine has no such chance.

"The situation in Ukraine looks fatal. The UN placed it along with Poland in the group of countries most at risk from depopulation. We have similarly very low birthrates. However, there are so many differences between our countries that the consequences of depopulation for Ukraine will be quite different," Talaga wrote.

© Sputnik / Andrey Stenin
'Marshall Plan' for Ukraine: Illusions of Economic Recovery
"In Poland alone, there are 1.2 million Ukrainians who have come here for work and will probably remain. More will follow them in the coming years [because] immigration is the only realistic option for improving living conditions and Poland is becoming an increasingly attractive and absorbent labor market."

"If other EU countries are attracting more Ukrainians too, due to the lifting of the visa requirement, the demographic consequences for Ukraine will be the same – turbo-depopulation."

The Ukrainian population decline presents two major worries for the Polish expert. He fears that Poland will never receive adequate compensation from its eastern neighbor for the genocide of Poles committed by Ukrainian nationalists during the Second World War.

"The prognosis for Ukraine is miserable, the state may collapse within this generation, with fatal consequences for Poland's security. It is worth taking this into account when entering into disputes, especially historical ones. We are not dealing with an equal partner, but with a sick person. In 20 years, perhaps we will no longer have anyone to whom we can prove our moral right regarding the genocide in Volhynia and Eastern Galicia."

In July 2016, the Polish Sejm (parliament) voted to recognize the massacre of up between 80,000 and 120,000 Polish citizens by the Ukrainian Insurgent Army (UPA) between 1942 and 1945 as genocide, and made July 11 a day of commemoration for the victims. The move was criticized by Ukraine's Verkhovna Rada.

© AFP 2020 / ANATOLII STEPANOV
How Kiev's Pursuit of Western Money is 'Adding Fuel' to Donbass War
Talaga warns that the depopulation of Ukraine could end in a deserted steppe akin to pre-industrial times. This vacuum must be filled by somebody – "the West, or Russia," the analyst writes.

"300 years, ago most of the territory of present-day Ukraine was comprised of boundless, uninhabited steppes. Who knows whether it will be like that again. It's not worth fighting Ukraine, because it is barely alive. Maybe not today, not tomorrow, but in the end, however, the depopulated and economically destroyed country will lose the strength to survive."

"Its collapse or surrender to Moscow will be a heavy blow to Poland, destroying the precarious but still functioning buffer between us and Russia. The UN demographics are a wake-up call," Talaga concludes.

Commenting on Talaga's concerns for Radio Sputnik, Russian commentator Maria Balyabina said that the possibility of Ukraine's demographic and economic collapse is a reminder of the tense relationship between Poland and its eastern neighbor, which Warsaw sees as a useful "buffer" between it and Russia.

"He thinks that Poland can deal with the depopulation problem and that after a few years its economy will be one of the biggest in the world. The main thing is to stop these ideas from reaching the EU leadership, which could stop Poland's subsidies if everything's all right with their economy," Balyabina says.

"Ukraine doesn't get subsidies and it can't hope for a stream of migrants from other countries. That's why Mr. Talaga thinks that very soon, there won't be a buffer zone between Poland and Russia. That is, his main concern is for his own country, not his neighbor. It seems that this analyst sees Ukraine as a territory that can somewhat stop the enemy advance, if anything happens. But if Russia occupies this 'desert,' and without a fight, then it [Poland] won't have anyone to fight with, then everything is ruined."

"Of course, the expert is interested in the Ukrainians as well. After all, if there aren't any, then there won't be anybody to prove moral superiority over or blame for the genocide of Poles," Balyabina says.