Kiev is adding fuel to the fire of the Donbass conflict in a bid to get further aid from the West, a political analyst told Sputnik commenting on the latest events in the war in eastern Ukraine's Donbass region. 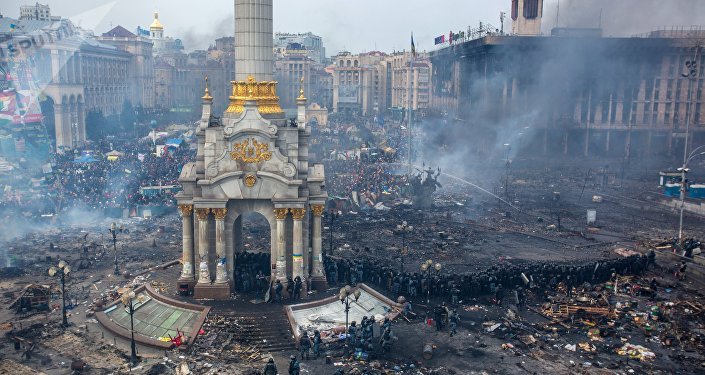 © Sputnik / Andrey Stenin
'EU Understands It Took Wrong Side' in Donbass Conflict
On Thursday, Ukrainian Defense Ministry spokesman Andriy Lysenko said that nine Ukrainian servicemen had been killed and five more wounded in Donbass in the past 24 hours.

According to him, the Armed Forces of Ukraine suffered the greatest losses when Donbass militia shelled the town of Krasnogorovka located in the Donetsk region in the early hours of Thursday.

© Sputnik / Sergey Averin
An apartment in a five-storied residential building in Yasinovataya, Donbass, damaged in shelling by Ukrainian army. (File)

"There were attempts by militants to launch an offensive, but our dense fire prevented them from doing so," Lysenko said.

In an interview with Sputnik, Russian political analyst Vladimir Skachko said that he believes that Ukrainian authorities are trying to provoke renewed fighting in Donbass.

"Kiev is trying to ignite the escalation of the conflict so that the Normandy Four members can have something to talk about. In addition, these killings [of the Ukrainian servicemen] can be seen as a terrible deceptive maneuver by the Kiev authorities and an attempt to once again accuse Russia of escalating the conflict in Ukraine's southeast," Skachko said.

He did not rule out that Kiev is seeking to use all this as a bargaining chip in its talks with the West.

"The West is signaling ever less willingness to pay Kiev for its readiness to be an anti-Russian ram and to fight in the foreground against alleged Russian aggression. That's why Kiev is fueling this conflict in order to confirm its pertinence and get some money out of the West for a war with Russia," Skachko concluded.

Meanwhile, Krasnogorovka resident Ivan Handogy published a video on YouTube which showed the consequences of "the terrible bombardment" which he said occurred in Krasnogorovka on Thursday night, the Russian news network Zvezda reported.

The footage did not show any destruction and signs of shelling in the town although the author said several times that "it was hot at night".

© Sputnik / Mikhail Palinchak
Never Mind Donbass: NATO Can Learn a Thing or Two From Ukraine, Kiev Says
Kiev entered into deadly armed confrontation with Donbass militia in 2014, after the self-proclaimed Lugansk and Donetsk People's Republics (LPR and DPR) refused to recognize the new Ukrainian government that came to power in what they perceive to be a coup.

The sides to the conflict continue to exchange fire, despite the ceasefire deal that was reached in Minsk in February 2015. The peace deal was brokered by the so-called Normandy Four (Normandy Quartet) that comprises Russia, France, Germany and Ukraine.

According to data provided by the International Crisis Group in late June, approximately 10,000 people have lost their lives in eastern Ukraine since the start of the conflict.

Some 2.5 Million Refugees Arrive in Russia Since Escalation of Donbass Conflict