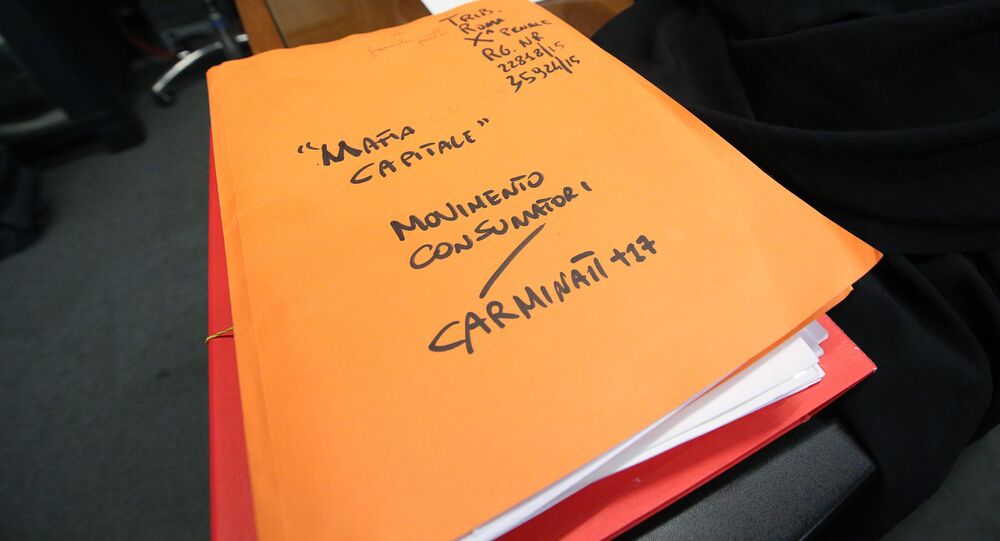 Long jail sentences have been handed out after a long-running trial in Rome, which exposed a massive network of corruption. The man at the heart of the conspiracy was Massimo Carminati, who has only one eye and a history of support for neo-fascist causes.

Carminati led a network that used extortion, fraud and theft to divert millions of euros that had been destined for Rome's public services.

The Mafia Capitale trial began in November 2015, and ended this week with a string of guilty verdicts.

© AFP 2020 / ALESSANDRO DI MEO
Photo taken on November 5, 2015 shows prosecutor Giuseppe Cascini (L) speaking next to the lawyer of Massimo Carminati, Bruno Giosue Naso (R) at Rome's tribunal, on the opening day of the Mafia Capitale trial, a case related to the alleged infiltration of City Hall by a mafia network.

Carminati was jailed for 20 years, his right-hand man, Salvatore Buzzi, got 19 years and another key associate, Riccardo Brugia, was locked up for 11 years.

Carminati and Bruggia had both been members of NAR (the Armed Revolutionary Nuclei), a far-right group which was implicated in the notorious bombing of Bologna train station in 1980, which killed 85 people.

The Bologna massacre was a false flag attack, part of the "strategy of tension" by which the far-right sort to destroy the Communist Party, which was gaining popularity in Italy at the time.

© AFP 2020
A compartment of one of wagons of the Ancona-Chiasso train pictured on August 02, 1980 at Bologna Central station after a terrorist bombing which killed 85 people and wounded more than 200.

Carminati lost an eye in a shoot-out with police in 1981 while trying to flee to Switzerland.

During the trial the prosecutors claimed Carminati and his gang flourished under Rome's former mayor, Gianni Alemanno.

Mr. Alemanno served in the MSI party under Mussolini's granddaughter Alessandra and when he was elected in 2008 he was greeted with chants of "Duce, Duce! (Leader, Leader!)" by neo-fascist skinheads.

He was defeated in the 2013 mayoral election and a year later prosecutors began to investigate the so-called Mafia Capitale network.

[Tweet: "In Rome the mafia does not exits. Even in Palermo it does not exist. It is time to review the idea that these crimes apply only to groups headed by southerners."]

Mr. Alemanno was not on trial but his name was frequently mentioned.

The 46 defendants, who had no connections with the Sicilian, Calabrian or Neapolitan mafias, were accused of conspiring with city councillors to siphon off funds intended for migrant and refugee centers and rubbish collection in Rome and the Lazio region.

Luca Gramazio, the former head of the Forza Italia party in Lazio, was jailed for 11 years. Forza Italia was the party set up by Italy's former prime minister Silvio Berlusconi.

Mirko Coratti, a politician with the center-left Democratic Party, was locked up for six years.

The trial took place in a fortified court complex at Rebibbia prison on the outskirts of Rome and Carminati took part via video link from his jail in the city of Parma.

Mr. Alemanno's successor as mayor of Rome, Ignazio Marino, was himself forced to resign in 2015 in an unrelated scandal involving expenses.

Last year, Virginia Raggi, from the anti-establishment Five Star Movement, was elected as Mayor of Rome.

But earlier this year she too was embroiled in a scandal after she appointed Renato Marra, the brother of a city official charged with fraud, as the head of Rome's tourism department.

Although Rome does not have an endemic mafia problem like Sicily, Calabria and Naples, it has a history of corruption and far-right extremism.

The Banda della Magliana, a famous criminal gang, controlled much of the city in the 1970s and 1980s but lost a lot of power after its boss, Enrico De Pedis was assassinated by other gang members in 1990.