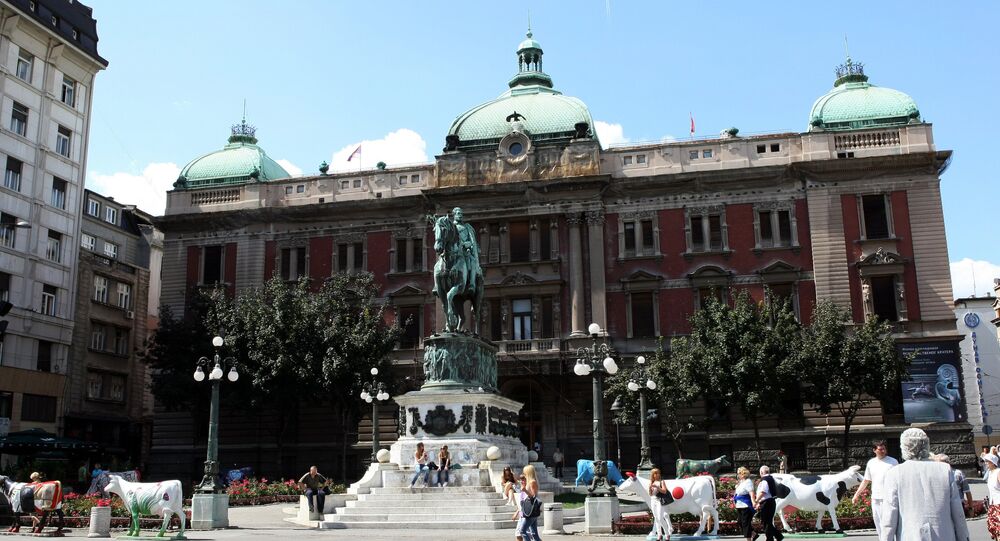 Planting Seeds: How China is Setting Up Shop in This Small European Country

A long journey starts with a single step. In an attempt to gain footing in the European market, China chose to start with a small country, which opens great opportunities for Beijing. Sputnik explores why.

It seems clear that Chinese investment in Serbia in light of the new Silk Road is a way of entering the European hub for a long term.

The agreement on the opening of an industrial park in the Serbian city of Smederevo on the banks of the Danube gives China the green light in terms of strategic cooperation with Serbia in the economic sphere.

© AFP 2021 / ALEXA STANKOVIC
Serbia Establishes Ministries of European Integration, Environmental Protection
This cooperation has the support of the Chinese government, and through Serbia, China is making an entry into Europe.

Two months ago, the mayor of Belgrade signed an agreement in Beijing on the construction of a new industrial park in Smederevo and recently a memorandum on its development was signed in the Serbian capital.

Smederevsky Industrial Park will occupy an area of 500 hectares. As the Minister of Industry of Serbia, Goran Knezevic, noted, the opening of the park will ensure the arrival of a large number of Chinese investors in Serbia with quality projects and with the desire to enter third markets together.

China’s infrastructural projects in Serbia amount to $1.5 billion and the opening of the park could also increase the cost of the Belgrade-Budapest railway construction, which is being overseen by the Chinese companies.

Of the $10 billion that China has allocated for projects in 16 countries of Central and Eastern Europe, Serbia has already staked up $2 billion. This is the largest amount in comparison to the other countries.

Zoran Djordjevic, who for many years worked as a correspondent for the Serbian media and was posted as a diplomat to Beijing, spoke with Sputnik in an interview about China’s generous investment into Serbia.

“As far as I know, it will be the first such industrial park in Europe. The Chinese have hesitated for a long time, but now, having agreed on the opening of this zone, they have practically begun a strategic economic cooperation with Serbia, which will be supported by the Chinese government,” Djordjevic said.

© AP Photo / Andy Wong
China Calls for Stronger Asia-Europe Digital Connectivity
He also said that a large number of Chinese firms will be interested in working in the field of infrastructure and a wide range of industries, from household appliances to solar batteries and energy, from information technology to protecting the ecology of the urban environment.

However, China’s goal is to expand to the European market from Serbia, the correspondent noted

"The Chinese will invite their best firms to go to other countries of Europe through Serbia. The Chinese have mastered high technologies. Previously, they tried to copy foreign technology, but then realized that it was better for them to buy and develop: thus they created the most modern technologies now, "Djordjevic said.

He further noted that Serbia has received a unique opportunity to enter Europe together with the Chinese.

“This is especially true of goods produced in China, for which the EU provides quotas: for Serbia such quotas are not provided,” Djordjevic said.

He gave an example of solar panels. If the goods are at least 51% Serbian, then the restrictions are removed, hence the prospect of new factories which will be able to distribute their goods not only in Serbia, but also in other European markets.

This fall, Serbia will begin work on the creation of two economic zones. The Serbian-Chinese industrial park in Smederevo will be occupied by a special joint venture.

At the same time, negotiations will also be held for the establishment of a special Russian-Serbian economic zone for high-tech Russian companies.

Dmitry Rogozin informed about this plan during the International Economic Forum in St. Petersburg. Detailed talks about this zone will begin in the fall at a meeting of the Russian-Serbian intergovernmental commission.