More than 600,000 Soviet soldiers died liberating Poland from the Nazis during WWII, but Warsaw is now siding with Nazi collaborators, an expert told Sputnik.

© Wikipedia / sfu
'Modern Barbarians': Top Russian MP Slams Poland for Toppling Soviet Monuments
On Monday, Polish President Andrzej Duda signed into law a bill on the prohibition of communist propaganda that regulates the demolition of Soviet-era monuments in the country.

"Act of June 22, 2017, amending the law on the prohibition of promoting communism or other totalitarian systems in the names of buildings, objects and public facilities, signed on July 17, 2017," the presidential website stated.

Poland’s lower house of parliament passed amendments to the so-called de-communization law, stipulating the demolition of almost 500 Soviet-era monuments in the country, on June 22.

The law enters into force three months after being signed.

The Russian State Duma denounced the amendments as "'sacrilegious"' and flying in the face of historical truth.

In an interview with Radio Sputnik, Moscow-based political analyst Eduard Popov described Warsaw’s position on the issue as “controversial.”

“By dismantling the monuments to Soviet soldiers who died liberating Poland from Nazi invaders, Warsaw, which denounces the glorification of Ukrainian Nazi collaborators, is actually siding with the Nazi regime [the Soviet soldiers] destroyed,” Popov said.

“This is a dishonest and dirty war against those who defeated Nazism. Poland and Ukraine thus find themselves on the same side of the barricade,” he added.

Eduard Popov said that with Britain’s exit from the EU, Poland remains at the forefront of US influence in the EU and is trying to play the role of a the leader of “Atlantic Europe.”

“The Poles look more at Washington than Brussels and are seen by the US as a very effective instrument of its influence in Europe,” Popov noted.

On June 22, the Sejm or, lower house of Poland's parliament, adopted amendments to the so-called de-communization law stipulating the demolition of almost 500 Soviet-era monuments in the country. 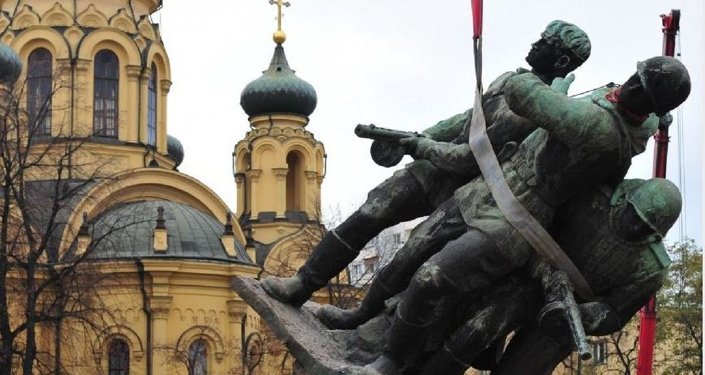 © Photo : http://ombudskid.livejournal.com/
Memory Loss: Poland Proposes to Remove 'Alien' Soviet Memorials to War Dead
According to Poland's Institute of National Remembrance, the law will be applied to 230 monuments commemorating the soldiers of the Soviet Red Army among many others.

Under the new law, the monuments and memorial stones considered to be "glorifying communism" are to be demolished. The amendments say that monuments and other similar sites "cannot pay tribute to persons, organizations, events or dates symbolizing communism or other totalitarian systems."

These memorials do not include monuments at cemeteries and other burial places, facilities not located at public areas and those erected for scientific goals as pieces of art and also monuments included in the registry of pieces of architecture.

More than 600,000 Soviet soldiers died liberating Poland from the Nazis during WWII.

'War' Against Monuments in Poland Provokes Aggravation in Relations With Russia