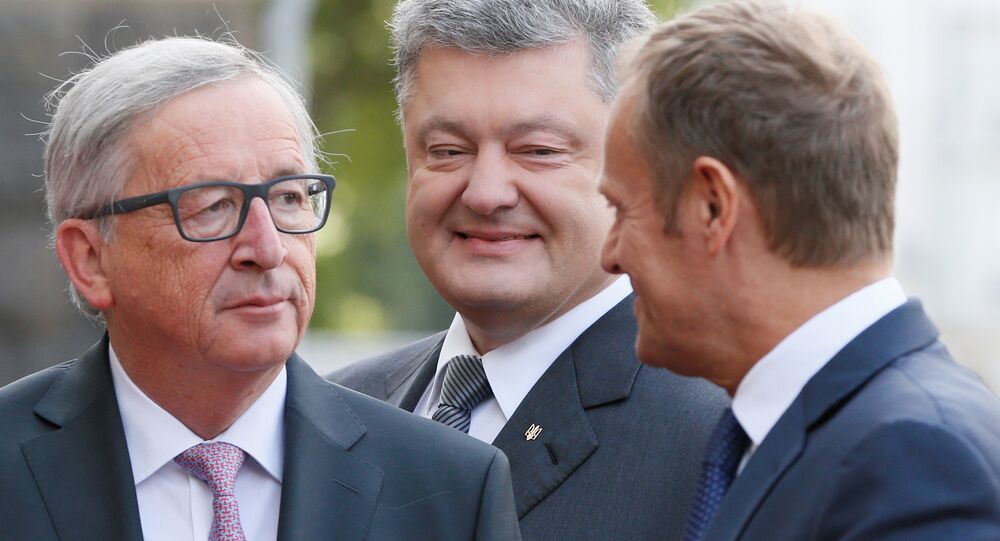 The EU Council’s approval of a series of new temporary unilateral trade preferences for Ukraine is an attempt to make up for the failure of the recent EU-Ukraine summit to produce any definitive final declaration, political analyst Yury Svetov told Sputnik.

© AFP 2020 / VASILY MAXIMOV
EU Adopts New Trade Preferences for Ukraine - Source
The list of trade measures favoring Ukraine and scheduled to take effect in September, were drawn up by the European Commission about a year ago as an addition to the free-trade zone established as part of Ukraine’s EU association process.

The EU Council hopes that the measure will help improve the economic situation in Ukraine and give a boost to its stuttering economic reforms.

“I see this as an attempt to sweeten the pill for Ukraine after its bid to get a nod from Brussels for its course on EU integration was rejected during the recent EU-Ukraine summit,” Yury Svetov said in an interview with Radio Sputnik.

“The trade preferences are aimed at revising upward the trade quotas Ukraine now has with the EU. This could certainly help Ukraine, but I don’t think it could really kick-start the country’s faltering economy. Ukraine is neck-deep in debt, that’s why [the EU] is trying to plug the country’s economic holes with all sorts of handouts to make it look like Ukraine and the EU are moving closer economically,” Svetov added.

The trade preferences for Ukraine, approved following a series of negotiations between the European Commission, the Council of the European Union and the European Parliament, will raise quotas for Ukrainian corn by 625,000 tons, barley by 325,000 tons, wheat by 65,000 tons, oats by 4,000 tons, processed tomatoes by 3,000 tons, natural honey by 2,500 tons, and grape juice by 500 tons.

Annual revenues from Ukrainian agricultural exports are expected to rise by $160 million due to the additional trade preferences granted to the country by the EU.

© REUTERS / Valentyn Ogirenko
Results of EU-Ukraine Summit Lack Joint Statement, Prospects Seem Gloomy
In return, Kiev has pledged to abide by such EU association guidelines as respect for democratic principles, human rights and fundamental freedoms, and to clamp down on corruption.

On July 11, the EU Council adopted a decision to finalize the Association Agreement with Ukraine on behalf of the European Union in the final step of the ratification process through which the EU and Ukraine commit to a close, long-term relationship in all main policy areas.

It will allow for the full implementation of the agreement as of September 1, 2017.

The EU-Ukraine Association Agreement, establishing a political and economic association between the bloc and the country, was signed in 2014. It was ratified by all EU member states in 2016 with the Netherlands being the last state to support the move.