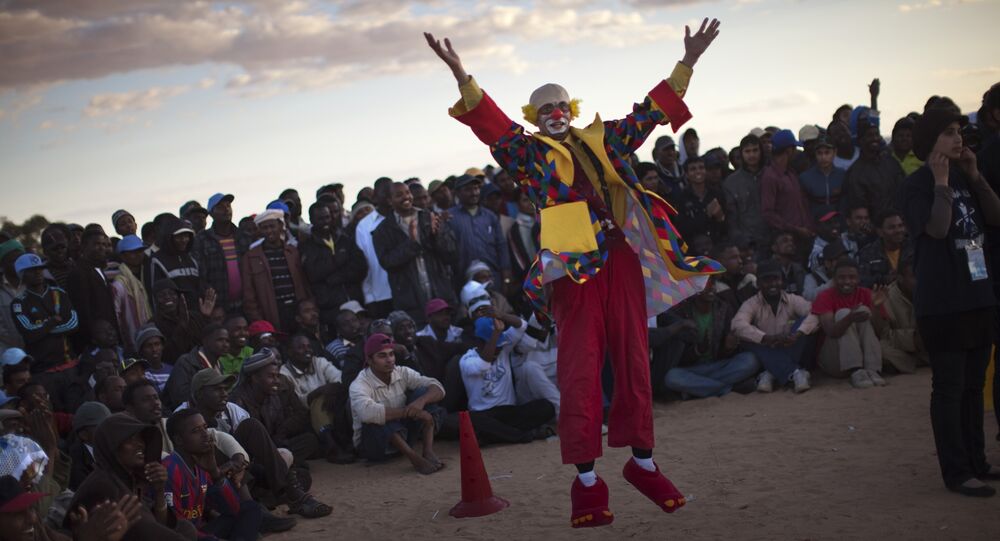 In the aftermath of the migrant crisis, integration of the newcomers has become an uphill struggle for many European nations. Sweden, which recently ranked as the world's best country for immigrants, is not afraid of trying unorthodox solutions. Of late, the Nordic nation has even turned to professional clowns to help integration.

© AFP 2020 / STIG-AKE JONSSON / TT NEWS AGENCY
Sweden Struggles to Find Homes for 'Refugee Children' With Children
In a recent bid to improve the integration process, a total of 25 million SEK ($3mln) has been allotted to various organizations, including Clowns Without Borders, the Swedish Migration Board wrote in a press-release. The organization is expected to improve integration through fun and games.

By their own admission, Clowns Without Borders work with such initiatives as "Welcome to Sweden," where various activities are being arranged at refugee accommodations. According to their website, asylum seekers may also try their hand as circus performers.

"Other organizations help people survive. We get people to start living again," Clowns Without Borders wrote on their website.

The idea of the new allotment is that the clowns will "create meetings through playing."

© AFP 2020 / JONATHAN NACKSTRAND
Lap Dance Instead of Deportation: 'Underage' Refugees Thrive in Sweden
Other beneficiaries include the Jämtland-Härjedalen Sports Federation and the Red Cross. The money allotted to the sports federation will be used to provide asylum seekers the opportunity to develop and integrate socially. Among other things, asylum seekers will get acquainted with athlete training programs, practice the Swedish language and build up a network of contacts.

The money originates from the European Asylum, Migration and Integration Fund (AMIF), which has a budget of over 3 billion dollars for the period 2014-20.

Another peculiar integration initiative is a camel park, which is being built in the city of Gothenburg with hope of creating jobs for immigrants. The camel park in the migrant-dominated suburb of Angered is expected to provide "low-carbon" jobs for foreign-born Swedes who are otherwise struggling to find a place in the Nordic country's labor market.

© CC0 / Pixabay
Swedish Horsewomen Saddled With Refugee Kids to Promote Integration
According to project developer Géza Nagy, the park will become a major tourist attraction, where visitors will be able to pet and ride camels, as well as try camel milk and other camel products. The choice of venue was anything but accidental. According to the organizers, Angered is rich in migrants from the Middle East and Somalia, who possess "extensive knowledge" of camels.

However, the project sparked a major controversy and was slammed as "racist" and "showing a colonial mindset" towards migrants. According to Catholic refugee organization Caritas Sweden director Gun Holmertz, the organizers simply wanted to turn Angered into "some kind of exotic circus with immigrants and animals." The plans provoked a negative reaction from local immigrants and unleashed a storm of comments in social media.

​Previously, the camel center was awarded 500,000 SEK ($60,000) in state support, which was however withdrawn earlier this year.