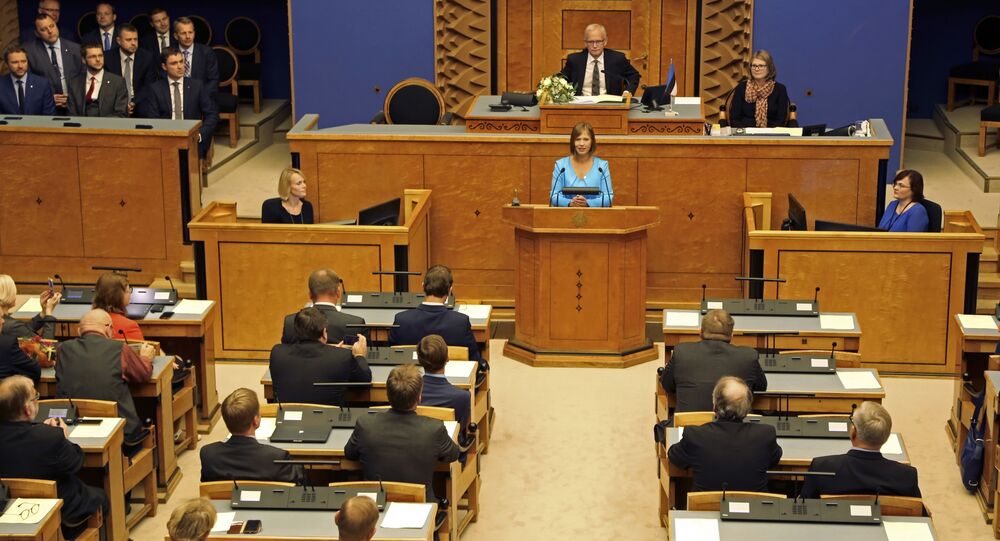 Residents Asked Not to be Disturbed: Estonia's Presidential Election Trick

On Monday, President Kersti Kaljulaid told Latvian newspaper Latvijas Avize, that direct presidential elections were not on the agenda in Estonia. Vladimir Barsegyan, a contributor to Radio Sputnik Estonia, explained what trick allows the powers-that-be to select the country's leader.

© Sputnik / Vladimir Fedorenko
Apartheid, Estonian-Style: Lawmakers Propose Stripping Russians of Right to Vote
In an interview with Latvian newspaper Latvijas Avize, Kaljulaid said that Estonians "were satisfied with the existing parliamentary democracy and did not see the need for a president elected by the people."

An indirect election took place in Estonia in 2016 to elect the president of Estonia, who is the country's head of state. The Riigikogu — the Parliament of Estonia — elected Kersti Kaljulaid to be the next head of state of Estonia to succeed Toomas Hendrik Ilves, who had served his second and final term as President.

Vladimir Barsegyan, a contributor to Radio Sputnik Estonia, explained the tricks of the country's undemocratic elections.

"The presidential elections in Estonia are not at all a democratic procedure. It is being elected by the country's parliament. The head of state is considered elected if he or she had been voted for by two thirds of the deputies. If in the first round none of the candidates wins enough of the votes, the second round is being held the next day.  If there is still no result in the second round, then the third one is held between the first two candidates, who secured the higher number of votes," Barsegyan explains in his article for Radio Sputnik.

© Photo : Pixabay
Estonia Expels Russian Diplomats in Bid to Get US Support, Russian MP Says
The journalist further explains that if there is no winner in the third round, than in one month an electoral college elects the new head of state by simple majority of votes. The electoral college is chosen from the parliament members and the representatives of the self-governing authorities.

Barsegyan then explains what the slyness of this type of elections is. The presidential candidacy is the subject of the bargain of the ruling parties. They choose the right candidacy and then secure his or her election by making necessary arrangements with parliamentarians and electoral delegates.

The head of state therefore is chosen not by people and thus bears no responsibility for his deeds and actions. It has nothing to do with democracy and is very convenient for further manipulations with the head of state.

The author says that the election of Kersti Kaljulaid is a vivid example of such manipulations. In autumn of 2016 she was literally appointed the president by the Estonian parliament by the votes of 81 parliamentarians. She would have never elected president in direct elections as practically no one had ever heard of her until the voting.

The discussions about the direct elections of the president by the Estonian people are a long-going and fruitless business. The politicians who had formed their own, separate from the rest of the country, domain, are resisting persistently and successfully. Even though the first Estonian president Lennart Meri and his successor Arnold Rüütel had called for direct elections as the indefeasible right of Estonian people and urged to change the constitution.

© CC0
Estonia Reliable US Ally, Appreciates US Contribution to EU Security - PM
However there was always someone to object that it is unacceptable to change the governing law.

Backstage, there have been talks that the people are not ready for such a serious move while there are statesmen who will first choose a candidacy among themselves and then will vote for him or her.

Therefore the remarks of the current leader only prove that the country's political elite is fully satisfied by the current state of affairs. The people would have chosen otherwise. But who of the politicians really cares when it gets down to power, Barsegyan concluded.