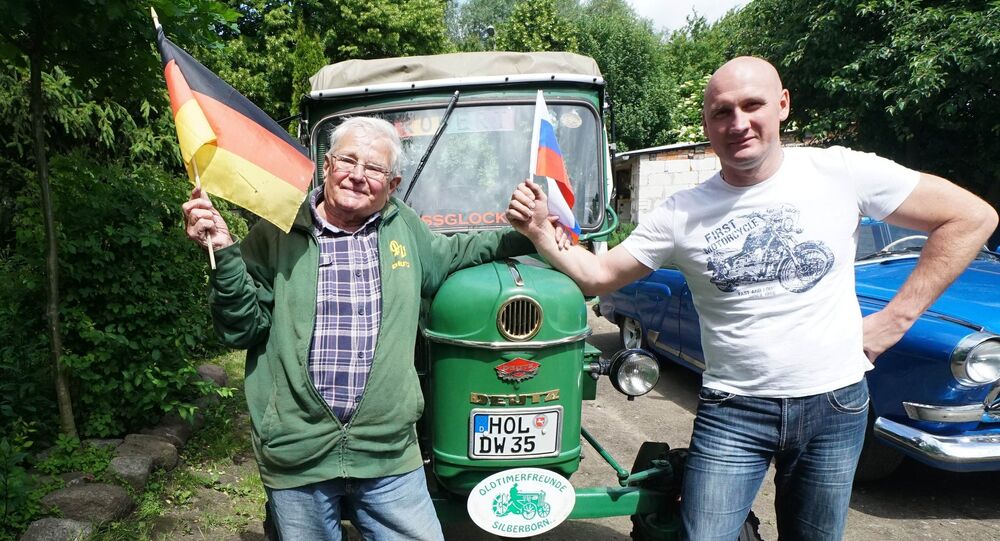 Winfried Langner, 81, from Lauenfoerde in Lower Saxony, has managed to drive his vintage 56-year-old tractor all the way to St. Petersburg.

Winfried Langner took six weeks to complete the trip, which took him through Poland, Lithuania, Latvia and Estonia. He only made one longer stopover, in Kaliningrad, where he paused his journey to fix a broken rear axle in his tractor.

"During the trip to St. Petersburg I was always mostly on the right track," Winfried, who has been dubbed "Trucker Willi" by the German press, told Sputnik Deutschland.

"When I saw a big bus or truck, I gave my horn a big honk, and when they passed by me, they honked back and thanked me! It was crazy, really!" he said.

The trip to St. Petersburg is by no means the first foreign jaunt for Langner and his 1961 Deutz tractor, which has a top speed of 18km/h and is dubbed "Robert."

Winfried bought the tractor after he retired from his job as an engineer of construction machinery in 1998. In 2006, the restoration was complete and he began driving the machine to the Swiss and Austrian Alps for holidays.

When his wife traveled to Mallorca several times on holiday, Winfried didn't join her because he disliked flying. After she died in 2012, after 52 years of marriage, he decided to travel to Mallorca in his tractor, to see the place she loved so much.

In 2015, he made another trip abroad, to the North Cape of Norway. This year, he originally planned to drive to Argentina, but settled on Russia after his doctor advised him to avoid extreme heat.

Winfried said that he was impressed by the Russian infrastructure and the reception he received there.

"It's fantastic! There is nothing else like it! The elevated highways and the cleanliness of St. Petersburg – it's nothing like Germany – and the Russians are so friendly," Winfried said.

© CC0
Just In Case: Germans Keep 13 Billion Deutschmarks Stashed Away for a Rainy Day
He managed to make some friends along the way, too.

"Of course. It was a bit complicated because of the language, but with hands and feet we made ourselves understood. The people are so friendly and want to understand everything, they show a lot with gestures."

Although Winfried is fascinated by the idea of traveling to Vladivostok in Russia's Far East, he considers it a tractor drive too far. However, he would like to drive to Moscow in two years' time, if possible.

For now, he is taking a few days' well-earned rest in St. Petersburg, before he gets behind the wheel of his tractor again and takes the long road back to Germany.