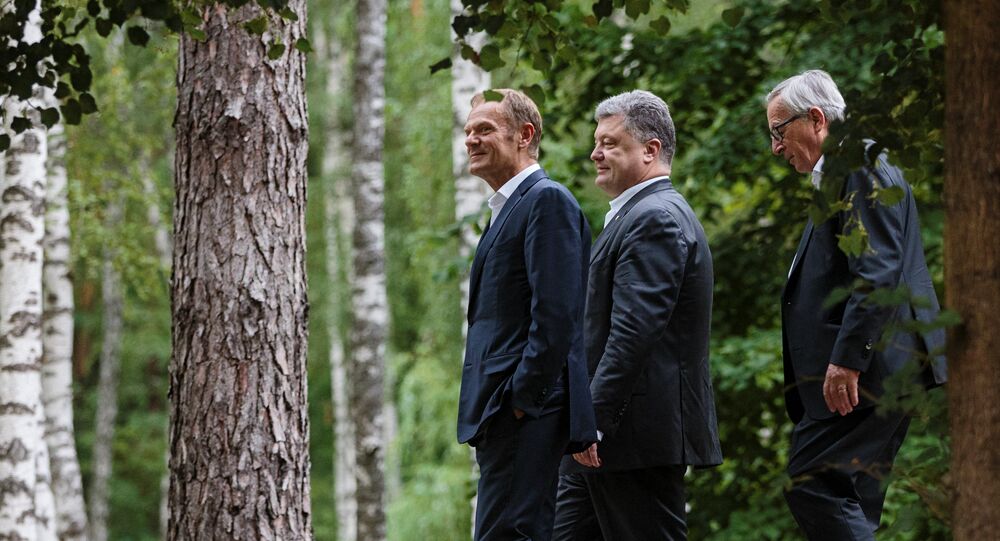 EU to Adopt New Trade Preferences for Ukraine on July 17

The European Union is going to adopt additional trade preferences for Ukraine, aimed at boosting the state’s economy under the association agreement, on July 17, according to a source.

BRUSSELS (Sputnik) – The European Union will endorse additional trade preferences for Ukraine, aimed at boosting the state’s economy under the association agreement, on July 17, an EU source familiar with the document’s discussion told Sputnik Friday.

© REUTERS / Valentyn Ogirenko
Knocking on the EU's Doors: Europe Now in Fear of Project It Launched in Ukraine
On July 4, the plenary session of the European Parliament approved new temporary unilateral EU trade preferences for Ukraine, in addition to the free trade zone created under the association agreement. The next step, needed for the preferences to enter into force, is an approval by the Council of the European Union.

"The point will be adopted at the Agrifish [Agriculture and Fisheries] Council on Monday," the source said.

In case the Council adopts the measure, Ukraine will be granted zero import tariffs for certain volumes of agricultural products such as natural honey, processed tomatoes and wheat. To get the preferences Ukraine will have to adhere to the same principles as those fixed in the association agreement, including, respect for democratic principles, human rights and basic freedoms. The Council of the European Union approved the EU-Ukraine association deal, signed in 2014, as a final step of the ratification process on Tuesday.

The trade preferences, expected to enter into force by September, will stay in effect for three years. The measure was initially proposed by the European Commission in March 2014 amid the complicated economic situation in Ukraine as well as the country’s efforts in carrying out economic reforms.

Knocking on the EU's Doors: Europe Now in Fear of Project It Launched in Ukraine