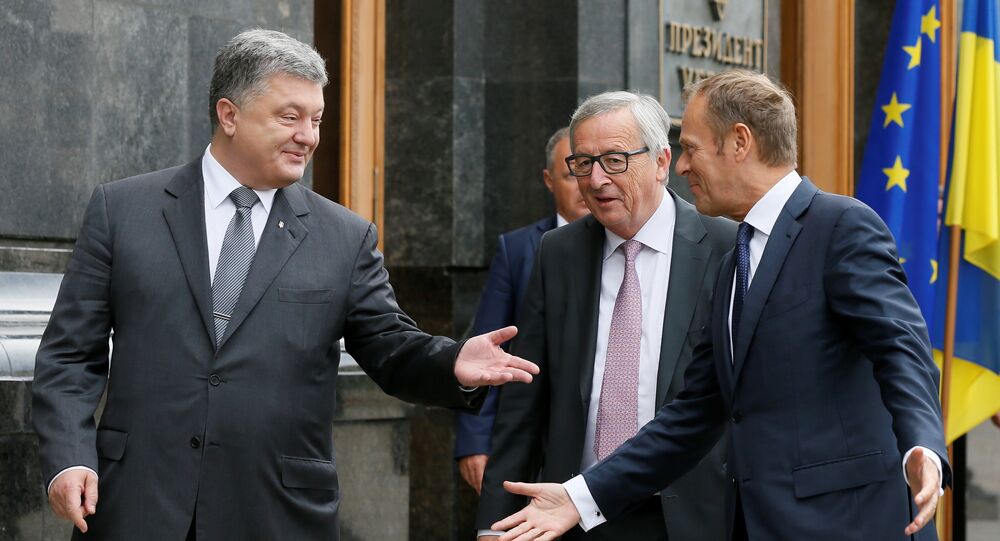 Knocking on the EU's Doors: Europe Now in Fear of Project It Launched in Ukraine

The 19th EU-Ukraine summit in Kiev has uncharacteristically failed to result in any joint statement announcing the parties' declared plans for further cooperation. An expert told Sputnik that it reveals deep rifts between the block and the country which it does not want to see among its ranks for very particular reasons.

© REUTERS / Valentyn Ogirenko
Results of EU-Ukraine Summit Lack Joint Statement, Prospects Seem Gloomy
The 19th EU-Ukraine summit, which wrapped up in Kiev on Thursday, summed up the results of joint work on the reforms in Ukraine and the development of bilateral relations, but failed to deliver any joint statement, traditional document for such events, in which the parties declare plans for further cooperation, reportedly due to disagreements within the bloc on the vision of future relations with Ukraine, which aspires to ever become a member of the European Union.

European colleagues did not respond to this initiative. The head of the European Council Donald Tusk stressed that the main document in the relations of the two sides at this stage is an association agreement, which will enter into force on September 1.

According to the Evropeiskaya Pravda media outlet, Kiev insisted that the joint statement should refer to a phrase from the EU-Ukraine Association Agreement that "the European Union acknowledges the European aspirations of Ukraine and welcomes its European choice, including its commitment to building a deep and sustainable democracy and a market economy."

However, the EU categorically opposed this allegedly because of disagreements on this issue among the members of the union.

© REUTERS / Valentyn Ogirenko
Kiev, EU Leaders Discuss Elaboration of 'Marshall Plan' for Ukraine - Poroshenko
The Netherlands demanded the addition of new restrictions to the Ukraine's European dream. The Hague was supported by several other countries, and eventually the negotiations simply broke off, and the Council of the European Union at the ambassadorial level decided that the draft (statement) prepared for the summit should go to trash bin, the publication reported.

Donald Tusk avoided the answer to the question on failure to adopt a joint statement at the end of the 19th EU-Ukraine Summit.

Sputnik Radio discussed the issue with Vadim Kolesnichenko, a Ukrainian and Russian politician and the chairman of the presidium of the Internal Council of Russian Compatriots.

"It is quite hard to comment on the naïve desires of Ukraine to become a member of the European society. The thing is that back during the days of the state coup in Ukraine, the European community had made it absolutely clear that the issue of Eurointegration has nothing to do with Ukraine's membership in the European Union," the politician told Sputnik.

He further elaborated that all of the European officials had unequivocally stated that the issue of the Eurointegration is purely about the Ukrainian market, its territory and those aims that were put before Ukraine. The EU membership of Ukraine had never been on the agenda.

"Europe has started fearing the project it launched on the territory of Ukraine. Therefore Ukraine's membership in the EU had never been on the agenda and won't be for at least 50 years to come," Kolesnichenko told Sputnik.

© AP Photo / Sergei Chuzavkov
EU-Ukraine Association Deal 'Defeat' of Ukrainian President's Policy
The politician also commented on the news that it were the Netherlands who demanded the addition of new restrictions to the Ukraine's European dream, saying that it doesn't matter which country actually objects Ukraine's membership in the bloc.

"it does not actually matter who is objecting. It is like pass-outs among card players: it is one country today, another – tomorrow, a third one – next time. What actually does matter is their common position: not let Ukraine into the EU," he said.

The politician provided his reasons why Europe does not want to see Ukraine among its ranks: first of all, because Ukrainian nationalists, the so-called Banderovtsy, the team of Stepan Bandera, who have been recognized worldwide as Nazi collaborators, are being hailed as national heroes in Ukraine.

The same very people, who had been eliminating the Poles, are now being honored in Ukraine. Who would let in its territory the people with such a state ideology, Kolesnichenko wondered. Such a country is being feared, he said.

There could be some kind of a joint final document, which, however, would contain nothing which can be regarded as a new achievement of the "chocolate king" Petro Poroshenko, the politician stated.