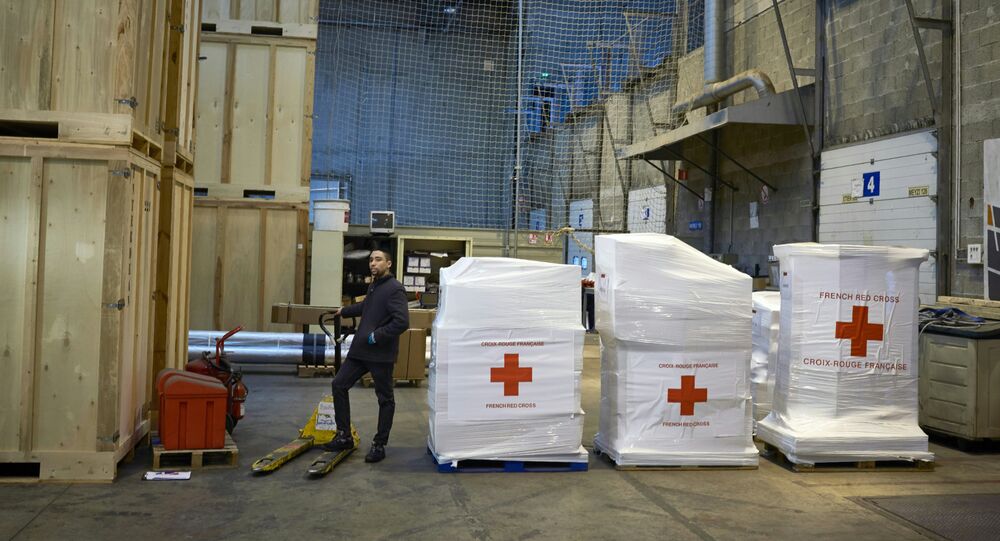 The International Committee of the Red Cross (ICRC) sent 21 vehicles containing hundreds of metric tons of aid cargo to the citizens living in the Donetsk region in eastern Ukraine, the Ukrainian border service said Thursday.

MOSCOW (Sputnik) — In April 2014, Ukraine began a military operation against the self-proclaimed Lugansk and Donetsk People’s Republics (LPR and DPR) after they refused to recognize the change of government in Kiev.

The sides continue to exchange fire despite a ceasefire deal reached in February 2015 in Minsk by the so-called Normandy Four, made up of Russia, Ukraine, France and Germany. The conflict took the lives of more than 10,000 people, according to the UN estimates.

"A total of 21 cars with construction materials, medical goods, hygiene items weighing 327.7 metric tons went out [of the Ukrainian territory] through the Novotroitskoe checkpoint into the uncontrolled territory. The cargo was delivered to the Donetsk region residents from the International Committee of the Red Cross mission," the service’s statement read.

Since 2016, the ICRC has been proposing the creation of "safety zones" in Donbass against the backdrop of the ongoing military conflict in Ukraine. The initiative aims to enhance the protection of vital infrastructure in the region, such as water, gas and electricity plants or lines on the front line or close to it.

The proposal further presupposes the establishment of five zones that will ensure, in particular, access to drinking water. The ICRC insists that zones must include such critical infrastructure sites as, in particular, the Verkhnekalmiusskaya Filtration Station, the Donetsk Filtration Plant, the local network of pipelines, as well as main water pumps in the region.

The Organization for Security and Co-operation in Europe (OSCE) is open to the idea of deploying a police mission in southeastern Ukraine and wants to discuss the matter with the United Nations, the OSCE stated, adding that no decision should be taken whilst the situation on the ground remains volatile.