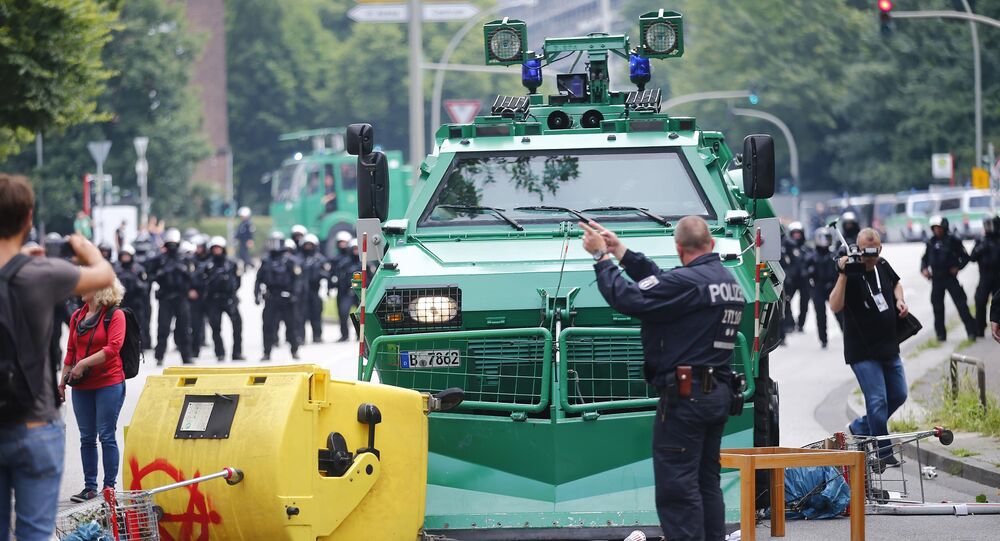 The Hamburg Messe and Congress Center has become one of the most heavily guarded places on Earth as G20 leaders gather to hold their talks here. Nevertheless, for the past 24 hours, groups of activists have been trying to besiege the venue from both land and sea.

Germany’s second largest city looks like a war zone. Helicopters patrol the sky and sirens wail constantly as police vans in squads of dozens rush from one neighborhood to another.

Pockets of resistance appear suddenly: cars are set on fire in Altona district, storefront windows are smashed by youth, demonstrators block one street after another. A group of young people marches towards police cars chanting anti-capitalist slogans. No violence comes from the protesters, but police retaliates with pepper spray.

​​Greenpeace activists tried to break the security perimeter from the sea, but were stopped by marine police boats.

In other places you can hear "Achtung, achtung!" from loudspeakers as armored vehicles clear the way through improvised barricades for water cannon trucks.

​Police reinforcements have been sent to Hamburg from all over the country, including Berlin. Despite the fact that many of their colleagues were injured by radicals on Thursday, the officers – most of them young people themselves – keep calm.

When it comes to the actual affiliations and demographics of the Hamburg protesters, the real picture is quite different from what’s being shown by most local and international TV networks. Not everyone here is a radical, and certainly not everyone is anti-globalist.

Britta is from the state of North Rhein-Westphalia. She’s one of the protesters who blocked a street and was pushed away by law enforcement officers. The woman says she’s here to express her frustration in a peaceful way:

"Those who are gathering won’t find the solution we need, because they are part of the problem," she explained. "So I think it’s very important to show with actions like this day of civil disobedience that there are many people who don’t agree, and that we’re really fed up, but we’re trying to stay calm. As you might have recognized, not everybody was able to stay calm, but I think it really shows the frustration of the people."

However, according to Britta, protesters in Hamburg do not represent one single political group or one activist movement.

"We are very diverse. There are so many different arguments. There are people [supporting] refugees, there are environmentalists, there are multiculturalists. So I think there is a wide variety of people who gathered, and you can’t label them all under one name.

​The protest is being supported by some local small businesses whose owners have put anti-G20 and anti-Trump posters in their windows.

It’s likely that the "NoG20" rallies will continue on Saturday, as leaders of the G20 states continue their meetings in Hamburg.