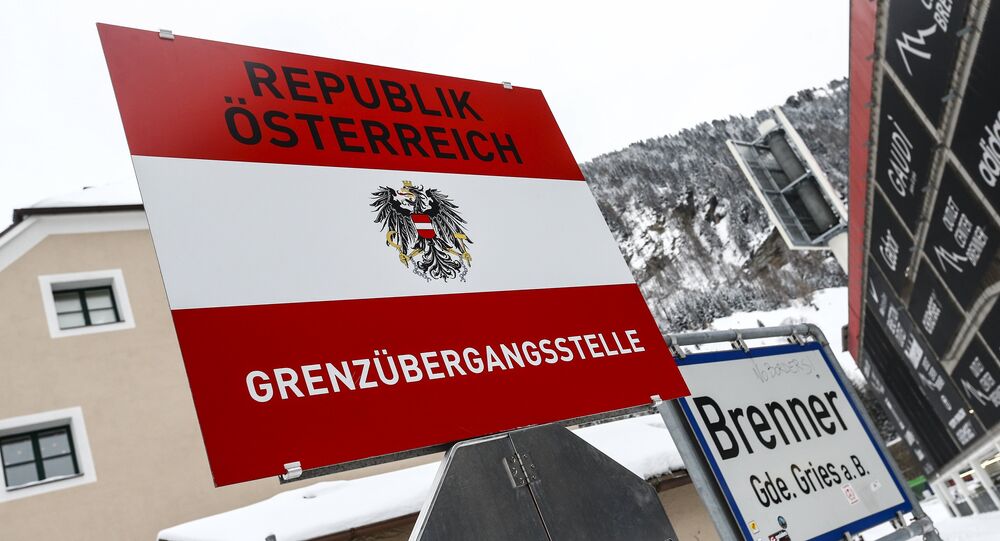 After Austria sends soldiers and tanks to defend its border with Italy at Brenner, Italian politicians are urged to follow a similar policy and close their ports to migrant boats.

© AP Photo / Emilio Morenatti
Italy Should Follow Austria's Example in Border Control - Lega Nord Member
On Tuesday, Austria sent 750 soldiers and four Pandur armored carriers to the Brenner border checkpoint with Italy, in anticipation of possible deterioration in the security situation there amid fears of a further migrant influx.

The Italian Foreign Ministry summoned Rene Pollitzer, the Austrian ambassador to Rome, over the plans to strengthen border controls and called for EU sanctions on Austria for a "lack of solidarity."

Italy is struggling to cope with the increasing numbers of migrants who are arriving on its shores. Up to Monday July 3, 85,183 migrants arrived on its shores this year, an increase of 20 percent on the 71,279 migrants who arrived during the same period last year.

Italy's ambassador to the European Union, Maurizio Massari, described the situation as "unmanageable." In a meeting with EU Migration Commissioner Dimitris Avramopoulos, Massari reportedly said that Italy is considering closing its ports to boats carrying migrants.

Maurizio Massari told Avramopoulos that "the situation we are facing is serious and Europe cannot turn its back," an Italian government source told Reuters.

"The idea of blocking humanitarian ships flying foreign flags from returning to Italian ports has been discussed," another Italian government source said.

© AFP 2020 / PHILIPPE HUGUEN
Rights Group Accuses French of Illegally Returning Minor Migrants to Italy
Writing in Sputnik Italia, columnist Mario Sommossa called on both Italy and Austria to go ahead and close their transport hubs to the growing numbers of migrants coming to Europe from North Africa.

"Over the past six months, we have 'rescued' almost 100,000 people in the sea, and the number only continues to grow. There are 1.2 billion people living in Africa and even if a small proportion of them want to come and live in Europe, we are talking about tens of millions."

"Because of the economic crisis, the unemployment rate in Italy is so high that we can't provide employment to all the people who are arriving (not counting other immigrants from countries that recently joined the EU). In addition, it takes at least a year to determine the status of all migrants, during which they remain on our territory without the right to work. Even if it turns out that the arrivals are illegal and don't have the right to stay in the country, sending them back to where they came from is too expensive and technically difficult," Sommossa explained.

"What should an Italian politician do, if they care about their future of their country? They should do exactly what politicians from other EU countries are trying to do: refuse to accept boats with migrants at Italian ports. Since it's impossible to build a wall in the sea, the only option is to make an official announcement to the other EU countries that Italy is closing its ports to any boat that doesn't have an Italian flag, which is bringing in migrants. I think it will take a few weeks for all the NGO's organizing trips to the Libyan coast to disappear," the journalist wrote.

"For those who shout about the inhumanity of such a decision, it's enough to ask: How many migrants do you want to take? Thousands? Tens of thousands? Millions? An infinite number? Nobody is brave enough to answer that question, because all these well-intentioned people don't think about the consequences, they just want to show how kind and good they are."

"The only way to stop trafficking and stop people dying in the Mediterranean is to make sure that anybody who takes the route illegally does not get to come to Central Europe," Kurz explained last month.

"After the decision to send the soldiers to the Italian-Austrian border, Austrian Foreign Minister Sebastian Kurz was severely criticized. However, he is thinking like a real, sensible politician: Kurtz recalled that Europe's goal is not to redistribute migrants, but to get rid of them. Of course, we are facing an epochal phenomenon and no borders can stop a person who wants to leave his country and seek a better life, but if we continue to just accept migrants, it will be perceived as encouragement by those who have not yet left their country. Kurtz suggested sending migrants back to migration centers in Tunisia and Egypt, and handing the management of these centers over to international organizations, for example, the UN," Sommossa said.

Austria's strengthening of the border was criticized by the EU Parliament President Antonio Tajani, who told the Italian Quotidiano Nazionale newspaper on Wednesday that "this is not the way to tackle the problem of refugees. Sending soldiers to the Brenner border is unacceptable."

On Thursday, Austrian Foreign Minister Sebastian Kurz defended his plan to potentially close the Brenner Pass, the Alpine route that forms the border between Italy and Austria.

"Austria will protect the Brenner border if there is no willingness to stop the Mediterranean route," Kurz explained at a migration summit of European and African politicians in Rome.