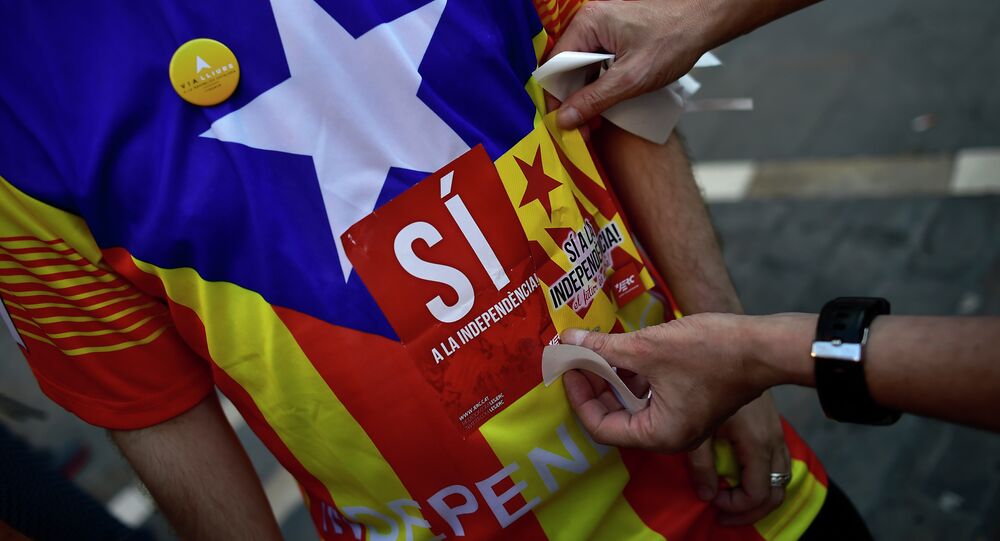 Catalonia Could Be Heading for Spain's Exit Door in October

Catalonia's ruling coalition has vowed to declare independence "immediately" if a majority of voters back it in an October referendum. Spain is planning to send in an army of lawyers, rather than soldiers, to quell the rebellious province.

Catalonia, the region of north-east Spain centered on Barcelona, has its own language and has a long-running antipathy towards the central government in Madrid.

© REUTERS / Vincent West
ETA Basque Terrorists Announce Disarmament
During the Spanish Civil War it was a stronghold of the Republican government and was only taken by General Franco's forces in 1939.

Franco died in 1975, mourned by few in Catalonia, and after democracy was restored the following year, the nation's attention turned to the Basque country, where the Euskadi Ta Askatasuna (ETA) carried out a campaign of bombings and assassinations in an attempt to win independence.

Catalans, horrified by the violence in the Basque country, remained loyal to the idea of Spain.

But the threat from ETA evaporated in recent years and earlier this year the remnants of the group handed over their remaining weapons and explosives​. Catalan demands for independence have risen however, as many in the affluent region resent the control from Madrid.

In 2014, Catalans voted overwhelmingly for independence in a non-binding referendum.

Now Carles Puigdemont, president of the Catalonia region, is planning a second referendum on October 1.

The question to voters will be: "Do you want Catalonia to be an independent state in the form of a republic?"

Puigdemont says that if a majority say "Si," they will push for immediate independence.

© AP Photo / Francisco Seco
People wave pro-independence Catalan flags, known as the Estelada flag, during a rally calling for the independence of Catalonia, in Barcelona, Spain.

On Tuesday (July 5) Lluis Corominas, a lawmaker from Together for Yes, said Catalans vote for the region's splitting from Spain, independence would be declared as soon as October 3, given the bill's adoption.

But the situation is markedly different from Scotland, which was granted permission by the British government to hold a binding referendum in 2014.

The Spanish Prime Minister Mariano Rajoy has already said the referendum's result will not be binding, and has said attorneys for the state will challenge it.

Meanwhile, there has been a dispute within the Catalan regional government, known as the Generalitat.

On Monday (July 3) Puigdemont fired his business minister, Jordi Baiget, after he gave a newspaper interview.

Baiget said the Spanish government would probably quash the outcome of the referendum if it was a "Yes" vote.

Dr. Duncan Wheeler, chair of Spanish studies at the University of Leeds, said the decision to fire Baiget was "dramatic" and "indefensible."

"Earlier today [July 5] the former president, Felipe Gonzalez, said the Spanish central government could invoke Article 155 of the constitution which gives them the right to intervene in matters which in theory are the remit of the Generalitat," Dr. Wheeler told Sputnik.

"While in Catalonia they are saying they want more independence, the Spanish central government is actually threatening to say that if they keep pushing, they will actually take some of their powers of devolution — going back as far as the 70s — back," he said.

"I am not a betting man, but if I was, I would say it [independence] would likely just get passed, but there is no chance of a big 'Yes' vote," Dr. Wheeler told Sputnik.

"Catalonia is pretty pro-European so there are some people who, if Catalonia could remain in the EU, they would probably vote for independence," he added.