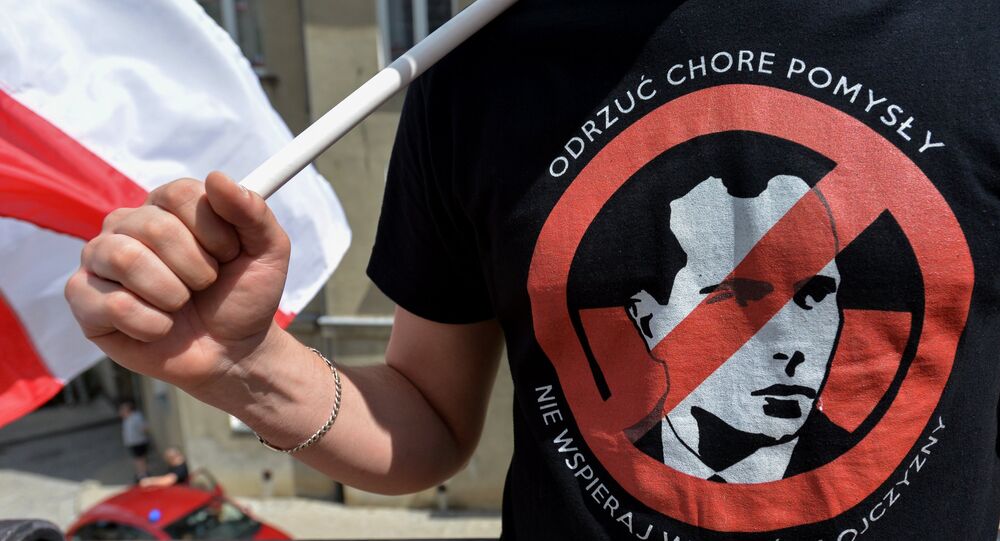 He underscored that while economic relations between Kiev and Warsaw are not in a very good condition, when it comes to historic issues everything is very bad.

"Our message is very clear: you will not join Europe with Bandera," Waszczykowski told the Polish media outlet wSieci.

He also criticized Kiev for its reluctance to put an end to the abuse of minorities’ rights.

© AP Photo / Efrem Lukatsky
'Powerless Senility': Poland Unwilling to Heed Ukraine's Nationalist Threat
"We say it both loud and silently. We will not repeat the mistakes of the 1990s when we didn’t resolve certain issues with Germany and Lithuania. I mean the status of the Polish minorities in those countries. We will demand that Kiev resolve all of the issues before asking for membership in the EU," the Minister said.

Waszczykowski pointed out that the Ukrainian government lacks the will to resolve those problems.

Kiev’s reaction was easy to predict, though. Markiyan Lubkivskiy, former adviser of the Security Service of Ukraine, said that Ukraine should demand explanations from Poland for Waszczykowski’s remarks. According to him, the comment of the Polish Foreign Minister was "unfriendly" and "harmful" to Kiev-Warsaw ties.

© Sputnik / Alexander Maksimenko
New Age of Nationalism in Ukraine Poses Threat to Its Closest Neighbors
"This is meddling into Ukraine’s domestic affairs. We will decide by ourselves who our heroes are," he told the Ukrainian broadcaster 112.Ukraina.

Poland may veto Ukraine’s possible admission to the European Union, according to Vadim Volobuyev, senior research fellow at the Institute of Slavic Studies of the Russian Academy of Sciences.

"This remark [by Waszczykowski] indicates a deterioration in Ukrainian-Polish relations. I have to admit that previously I underestimated the Polish ruling party. I thought that in order to stand against Russia, Warsaw would come to a compromise with Kiev. But this didn’t happen. Now, Warsaw is confronting Ukraine," Volobuyev told Radio Sputnik.

At the same time, the expert suggested that the current situation risks negative consequences for Poland in the EU.

"Warsaw’s reputation in Brussels is bad. Moreover, Poland has serious differences with Germany, the leader of the bloc. Now, they’re confronting Ukraine. All the above risks negative consequences for Poland," he said.

Stepan Bandera (1909-1959) was one of the leaders of the Organization of Ukrainian Nationalists (OUN) and one of the founders of the Ukrainian Insurgent Army (UPA). The UPA was formed in 1942 as a military wing of the OUN and operated mostly in western Ukraine. In addition to cooperating with the Nazi Germany against Soviet forces, the group conducted an ethnic cleansing campaign mostly directed at the region’s Polish population.

© Sputnik / Grigoriy Vasilenko
A man carrying a picture of Stepan Bandera during a torchlight procession of Ukrainian nationalists in downtown Kiev. File photo
© REUTERS / Gleb Garanich
Lavrov Talks on Rise of Neo-Nazism in Ukraine With Canadian FM
Polish historians claim UPA was responsible for killing between 100,000 and 130,000 Polish civilians and 5,000-10,000 Ukrainian civilians in Volhynia and Eastern Galicia, claims which Ukrainian historians have downplayed or denied outright.

In recent years, Ukrainian-Polish relations have been strained by Ukrainian historians' growing attempts to whitewash the World War II-era war crimes committed by the UPA.