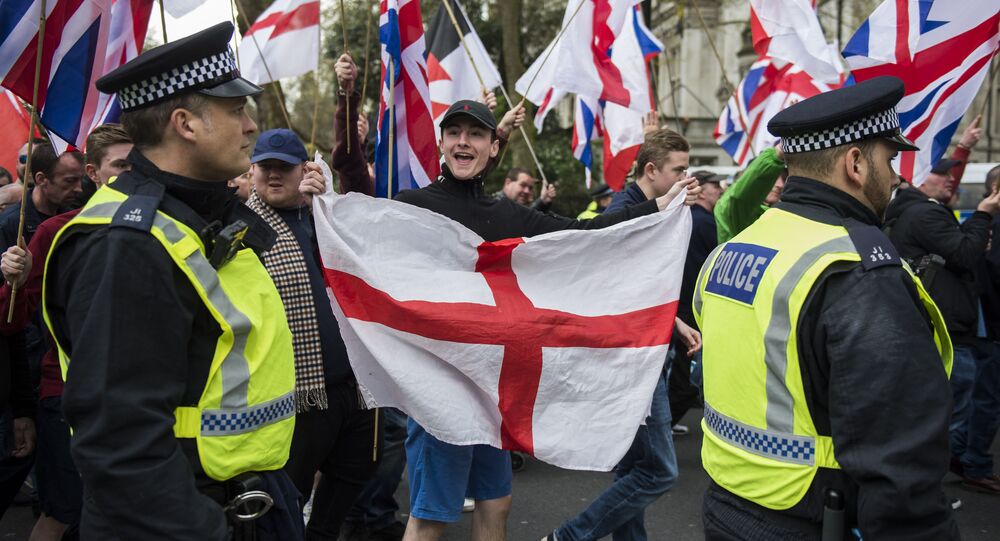 London is facing a rise in fascist material appearing on its streets. The Metropolitan Police are investigating an offensive "white zone" poster that was found on a lamp post in Hounslow, west London.

The poster features the far-right group, National Action, who has been labeled by the UK government as a terrorist organization.

According to sources, the group is very secretive and their rules prevent members from speaking openly about the group. They also celebrated the murder of Labour MP Jo Cox by Thomas Mair, who had links with various right-wing movements in Britain.

As a result, the National Action website has been shut down, due to its links to terrorism.

"How very sad that people cannot be peaceful and part of a community," said one Facebook user.

"Doesn't matter what color your skin is or what your religion is, just be a good person and teach your families the same," said another.

"This is an absolute disgrace — no way does this have any place in our town — or anyone else's town for that matter," someone else had posted.

​A spokesman for the Metropolitan Police said Hounslow authorities had received a complaint about a poster "which was displayed on a lamp post in the Hanworth area" and that "enquiries are ongoing."

Zones based on skin color are obviously not OK.

Unite Against Fascism (UAF) told Sputnik that there has been an increase in racist posters appearing in London and elsewhere in the UK.

Paul Sillet, UAF national campaigner, said that racist posters need to be treated with extreme caution and should be investigated swiftly.

"This reflects a number of things. One, and a number of authorities have already pointed this out, is the spike in hate crimes over recent months, as well as the rise in Islamophobia. As you are aware, there has been a spate of acid attacks on Muslim people, particularly in East London. We suspect, well we know, that some of these individuals are certainly from the far-right. The level of abuse they leverage at their victims is also reflected in these posters," he said.

"We [UAF] are very-very glad that anti-fascists groups like us and others have whittled down the British National Party (BNP) and the English Defence League (EDL). There's a number of individuals out there who hold anti-Semitic and Islamophobic views and they don't get a mass organization on the streets of Britain, thank goodness, but frankly show their venom, their poison in various outlets — which are these posters," Sillett told Sputnik.

​However, according to Sillett, people who see far-right communications should not just be concerned about the content, but also what lies behind the poster itself.

"Where you see racist posters, be careful. Not too long ago, an individual who put up racist posters, also placed razor blades behind them, so when people would rip them off they would get their fingers cut badly. Fascist groups should really be treated with much more intensity and investigation by the authorities," Sillet said.

The impact of these posters on the local community can be devastating, and Sillett said that a recent attack by a far-right group in Stamford Hill, a predominantly Jewish area, lead many local residents to feel isolated, upset and question how such hate could be allowed to continue in the 21st century.

"Three and half years ago, several anti-Semitic posters were put up in Stamford Hill, which is a Jewish area. It was part of a campaign run by a few people who believed that Hitler was a great man. These posters intimidated people and they were understandably very-very upset. To wake up in the morning and find posters with swastikas and horrible slogans… of course people got very angry and upset. It made them think, 'Why on earth should I put up with this in the 21st century?'."

© Flickr / Nate Edwards
Anti-migrant Stickers, Racist Graffiti - Are Refugees Really Welcome in Britain?
​The UAF are a prominent group in Britain, and have been known to stand head to head in marches against far-right organizations.

Some however, have been critical of the UAF, suggesting that at times they can be as ugly and aggressive as the racist groups they oppose by provoking public disorder and clashing with the police.

Paul Sillet believes that when far-right groups such as the EDL and BNP are allowed to gather and express their views, so should people of opposing views.

"Fascists, like the EDL and the BNP of course, believe the only mistake Hitler made was that he didn't win. These groups exist to perpetuate race hate and instigate racist attacks.

"So our [UAF] line is that essentially, wherever possible, if these people are allowed to march, then we should be as well," Sillet said.

"Where these people are allowed to grow and perpetuate ideas, you get murders, Stephen Lawrence was killed by a racist gang and there's a number of other examples I could point too.

"I would say the people who perpetuate disorder are the racists and fascists in this country," Paul Sillett told Sputnik.