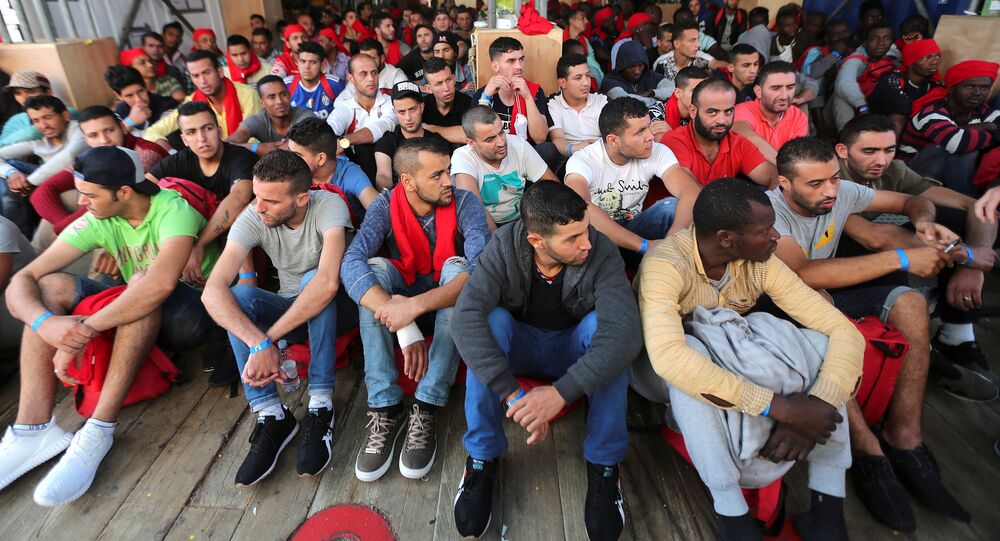 The migrant crisis may have largely slipped off the mainstream media's reporting radar, but the humanitarian calamity remains very much ongoing – and recent developments in Europe may have dragged the slow-motion disaster into its most dangerous phase yet.

On July 3, the United Nations Refugee Agency published a report on the current state of migration in Libya. Its findings were unambiguous — flows of refugees and migrants passing through the North African country have surged by 20 percent in 2017, and the hazards they face have likewise multiplied.

Thousands of individuals flee to Libya from countries across Africa and the Middle East, in desperate search of sanctuary every month — however, with the country reduced to a ravaged, rubble-strewn failed state in the wake of Western intervention, many resort to pushing onwards to Europe — specifically Italy — in order to escape the life-threatening dangers and difficult economic conditions that now blight the once prosperous and stable state.

​Absconding to Europe via sea has always been a death-defying endeavor, and rising numbers of escapees have inevitably increased the rate of en-route fatalities — UN data suggests at least 2,030 have died or gone missing as of June alone.

Still, some are making it through — 84,000 as of June alone in 2017 — adding to an influx that is already unmanageable for Italy.

Rome has gone so far as mooting the closure of its ports to all ships containing migrants, a proposal illegal under international maritime law.

More people have been forced to flee than ever. Get the latest data: https://t.co/TvwPUZqtrN pic.twitter.com/lUqjDVOR31

The government is exploring other methods of quelling the deluge, and convened an emergency meeting with France and Germany in Paris, July 2. The meeting produced a draft code of conduct for charities that rescue migrants and refugees from the Mediterranean, driven by the belief such groups acts as a "pull factor" for refugees, emboldening them to take flight.

The code would bring such organizations under the effective control of the Libyan and Italian coast guards, potentially restricting their ability to save imperiled individuals from overcrowded smuggling boats.

The proposal has caused widespread consternation in the NGO community, with Oscar Camps, the founder of the Catalan group Proactiva Open Arms, tweeting, "you are a 'pull factor'; you deal with traffickers, you finance the mafias, the taxi drivers of the seas, and you will close the ports to us. [And] we are the problem?"

​While consternation among aid agencies is perhaps understandable, so too is the Italian government's desire to control the flow of runaways across its borders. The UN Refugee Agency's report makes clear the country lacks the resources to absorb more refugees and migrants, particularly as the tide shows every sign of increasing in future.

"Irregular migration through Libya is unlikely to slow down, given the current political and security stalemate in the country and neighbouring states, the continuing drive for a better life, the increasing professionalization of the smuggling industry and the significant profitability of the route between Libya and Italy," the report cautioned.

On the same day the agency published its report, Pasquale Terracciano, Italian Ambassador to the UK, took to the airwaves to urge other European states to help shoulder the country's burden.

The response of Austrian Defense Minister, Hanspeter Doskozil, to the call was swift — although it may not have been what Terracciano, or EU leaders, were expecting.

Doskozil made clear 750 Austrian soldiers stand ready for dispatch to the Austrian-Italian border at 72 hours notice — and he expects "border controls will be activated and [military] assistance requested" very soon.

Austria's robust stance on the refugee crisis has endured almost as long as the saga itself — in 2015 the country closed off its porous borders with Hungary and Slovenia, and in 2016 officials established a policy of scrupulous checks at the Brenner Pass, its crossing point from Italy.

Increased arrivals of refugees+migrants:
my statement of today — Europe must show more solidarity with Italy. https://t.co/gFgDbFGt2U

However, this unprecedented burst of hawkishness may be motivated by the country's October general election, a vote in which the far-right Freedom Party (FPO) is attempting to shift immigration center stage, running on a platform of "ending Islamization" in Austria.

"The situation in Italy is heating up more and more. Therefore, the Mediterranean route must be closed and national borders protected and secure."

​The FPO is not the only Austrian party talking tough on refugees — Social Democrat leader, Chancellor Otto Kern, has called for the EU to ensure "sound protection of external borders," and Foreign Minister Sebastian Kurz, of the People's Party, has demanded the central Mediterranean refugee route be blocked.