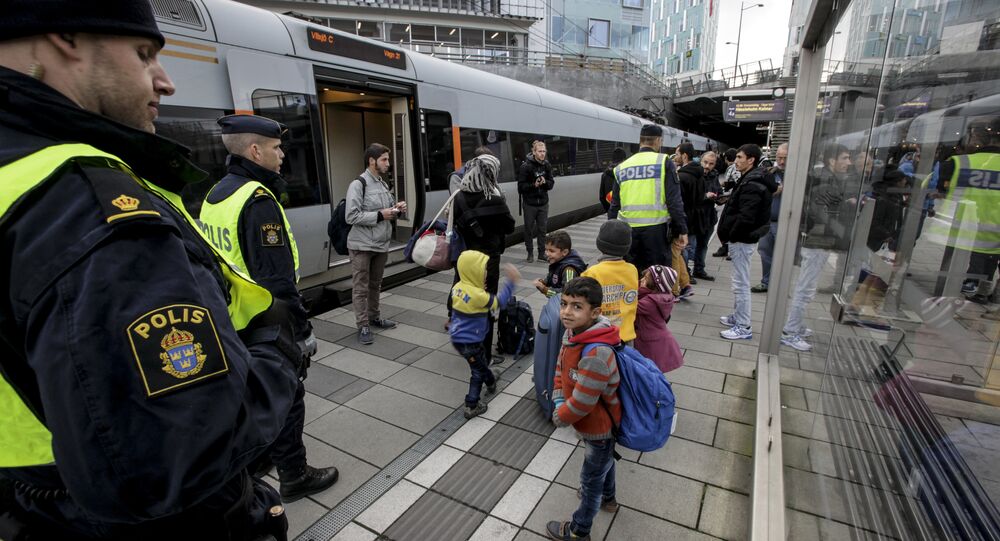 Sweden Struggles to Find Homes for 'Refugee Children' With Children

The proportion of unaccompanied girls among refugees in Sweden is increasing. This has led to accommodation issues, since most of the nation's asylum homes are adapted for men. Meanwhile, the fact that many of the so-called "refugee children" are married and have their own is a problem of its own.

© AFP 2020 / JONATHAN NACKSTRAND
Lap Dance Instead of Deportation: 'Underage' Refugees Thrive in Sweden
While the influx of migrants to Europe has been mostly male-dominated, the percentage of girls among the "unaccompanied refugees" increased from 16 percent to 23 percent in the first five months of 2017, according to a press-release by the National Board of Health and Welfare.

The main issue is that it becomes increasingly harder to find accommodation, since most of the refugee housing is suitable for men only. The National Board of Health and Welfare interviewed representatives of 74 Swedish municipalities that had taken in at least three girls in 2016.

"The municipalities say it's hard to find accommodation for single girls. The reception centers have been in many ways designed specifically for boys, both concerning accommodation and leisure activities," National Health Board investigator Elisabet Svedberg said, venturing that the girls' situation must be given more attention.

Yet another problem is that many of the girls are married and have children of their own, despite being underage. A majority of them are being placed in so-called "network homes," where they live with relatives or other adults they already know.

"An increasing proportion of single children seeking asylum in Sweden are girls and younger children. Many of them are in a difficult situation; some of the girls are already married and have their own children," a press release from the Social Board said.

© CC0 / Pixabay
Swedish Horsewomen Saddled With Refugee Kids to Promote Integration
In the interviewed municipalities, 905 single refugee girls were reported, of which 41 appeared to be married. A total of 53 of the girls, or 7 percent, have children, which is an exceptionally high proportion compared with the national average of 0.1 percent of girls aged 13-17. Reportedly, 3 percent of the girls do not go to school for reasons of parental leave.

However, this may undermine Sweden's integration efforts, ending in a sort of isolation. According to Petra Rinman, head of unit at the National Board of Health and Welfare, in many cases it is safer for the child to live with someone they already know. However, there is also an embedded risk that the person will have trouble integrating into society later on.