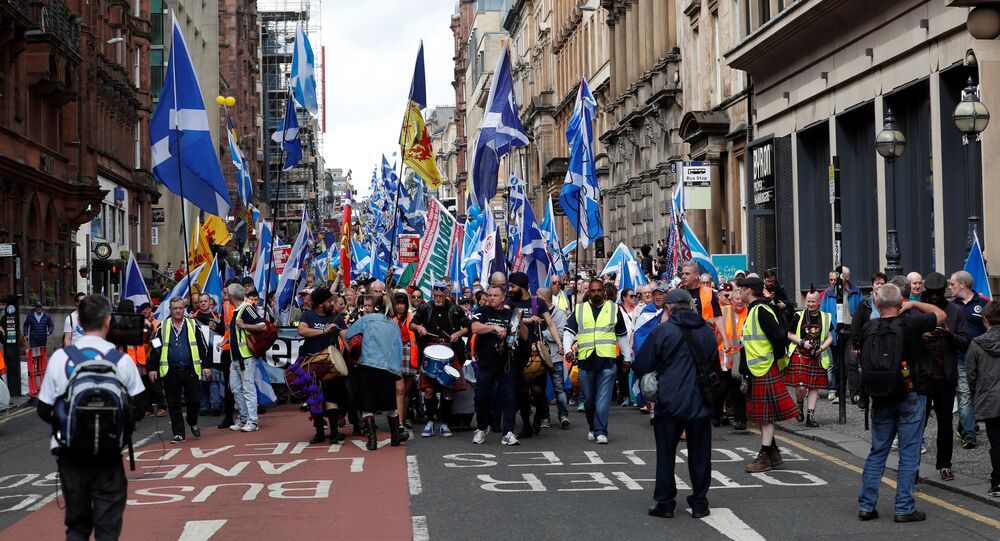 Scotland's First Prime Minister Nicola Sturgeon announced her decision to postpone the vote on independence due to people getting wary of the Scottish National Party's (SNP) domestic policies, according to experts.

MOSCOW (Sputnik) — There are more reasons behind the decision to postpone another Scottish independence vote than the usual Brexit argument, namely the possibility of "no outcome" and people getting wary of the Scottish National Party's (SNP) domestic policies, experts told Sputnik.

Scotland's First Prime Minister Nicola Sturgeon announced her decision to postpone the vote on independence speaking in Holyrood on Tuesday. She said that "we will not seek to introduce the legislation for an independence referendum immediately," but added that there are plans to come back to it in late 2018.

© AFP 2020 / Oli Scarff
Sturgeon Says Scotland Should Have Choice on Future After Brexit
Nicola Sturgeon argues that before the second independence vote goes forward there needs to be a more clear understanding of Brexit terms and that in the meantime the government will be trying to secure the best deal possible for Scotland in these talks. But according to experts, even though Brexit results are of major concern for the SNP, another reason why they shelved the vote is that they do not want to risk having the same result that they had in the past, when Scotland decided to stay part of the United Kingdom.

June 2017 data from "What Scotland Thinks," a website conducting opinion surveys in constituent parts of the United Kingdom, shows that 53 percent of Scots would say "No" while 41 percent would still prefer to see an independent Scotland. Just 6 percent said they did not know which to pick.

© AFP 2020 / Andy Buchanan
'Forget it': UK Gov't Vows to Block Scotland’s Bid for Second Independence Referendum
Decision to postpone the vote also comes after the SNP lost 21 of its 56 seats at Westminster in the general election held on the June 8. Mark Diffley, an independent polling expert, said it was a wake-up call for the SNP that its strive for independence does not add to the party’s popularity.

"A lot of the polling and research would suggest that the reason why the lost seats or at least one of the big reasons why they lost a lot of the seats, is because a lot of people thought that they were pushing for the second referendum too much," the expert explained.

Diffley also pointed out that other political parties put pressure on the first minister to "think again about the independence referendum." Scottish Conservative party leader Ruth Davidson at the party conference in March said that the SNP is not doing enough for education in Scotland and has been consistently urging Sturgeon to shelve plans for the vote.

Responsibilities of the devolved government in Scotland include health, education, justice, rural affairs, housing and the environment. According to the Scottish Social Attitudes (SSA) Survey, when asked about what the highest priority for the government should be, people listed helping the economy grow faster, improving standards of education, improving housing and improving people’s health.

Experts agree that the SNP will prioritize problematic areas back at home now that the independence referendum was put on hold.

"They need to sort some of the domestic issues that are hounding them, like educational standards. The SNP needs to regain some of its reputation for competence as that reputation has taken a bit of hammer," Strathclyde's John Curtice said.

© AFP 2020 / OLI SCARFF
Brexit to Create Huge Hole in EU Budget
He added that in terms of rebuilding public trust postponing the referendum alone is unlikely to do much good.

Last year the Programme for International Student Assessment (PISA) found out that Scottish schools recorded their worst ever performance since the tests began in 2000. Audit Scotland, a company that does surveys across the public sector, reported a drop in college student numbers. Annual reviews indicated that in 2015-2016 there were 220,680 students by headcount, which is the lowest number since 2006-2007. The government, however, argues with some of the findings of this research.

In 2017 another sector that came to the center of public attention was the situation in healthcare. In the beginning of the year, Peter Bennie, the chairman of the British Medical Association (BMA), said that Scotland’s public health service was "stretched pretty much to breaking point."

The BMA signals of several public health service problems in Scotland, mainly staff shortages, particularly among the general practitioners, nurses and midwives, a growing gap between wages and the cost of living and increasing workloads.

Mark Diffley says that people in Scotland expect the SNP to deal with these issues as voters "saw them [the SNP] as very competent, good managers. And a lot of that has now been lost. "

© Photo : Pixabay
New Referendum on Scotland's Independence to 'Be Very Risky for UK Government'
During a special edition of the BBC’s Question Time, Sturgeon was challenged twice on whether she would rule out the possibility of a third referendum if the second vote went forward and people voted to stay part of the United Kingdom. Sturgeon argued that she could not make such a promise as it would not be the right thing to deprive people of this choice and this possibility altogether.

"I think for now she’s gone as far as she could. She’s pushes the timetable back and I suspect think that’s the right thing to do in terms of public opinion. But the position has not changed. This is not a big re-think of policy. This is her saying that we need to be a bit more cautious," Diffley said.

John Curtis also said Sturgeon is unlikely to formally abandon holding the referendum, but will instead keep delaying the vote.