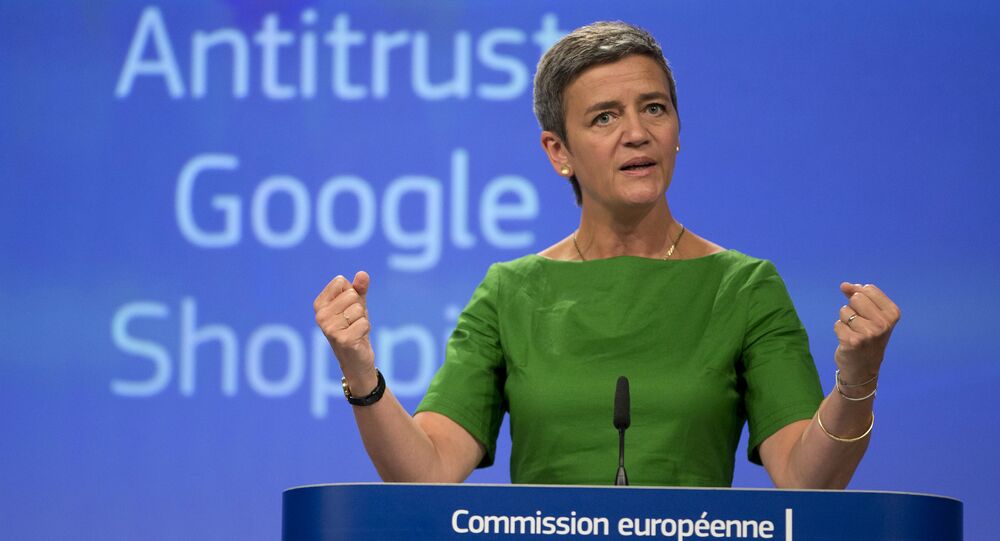 The European Commission (EC) has fined Google US$2.7 billion for manipulating search results in a landmark case that follows a seven-year investigation into the tech giant's shopping comparison service.

© AP Photo / Marcio Jose Sanchez
EU Commission Says Fined Google $2.72Bln for Breaching Antitrust Rules
As part of the decision, Google will have to change how its search algorithm ranks websites — a major imposition that the company will not take lightly.

The judgement ruled that Google had "abused its dominant position by systematically favoring" its own services. If it does not end its current conduct, says the EU, it will face penalties of up to five percent of its average daily turnover.

The fine, which was issued Tuesday, June 27, is the largest antitrust judgement handed out by an executive body of the EU, the European Commission and has beat a US$1.1 billion penalty that was given in 2009 to Intel.

.@Google gave illegal advantage to own comparison shopping service by abusing its search dominance: It must stop & pay fine of €2,4 bn.

​In an online statement released by the EC, the commissioner in charge of competition policy, Margrethe Vestager said that the company must now end the conduct within 90 days or face penalty payments.

"Google has come up with many innovative products and services that have made a difference to our lives. That's a good thing. But Google's strategy for its comparison shopping service wasn't just about attracting customers by making its product better than those of its rivals. Instead, Google abused its market dominance as a search engine by promoting its own comparison shopping service in its search results, and demoting those of competitors," she said.

"What Google has done is illegal under EU antitrust rules. It denied other companies the chance to compete on the merits and to innovate. And most importantly, it denied European consumers a genuine choice of services and the full benefits of innovation," Ms. Vestager added.

​In a televised statement, Ms. Vestager said it would take her 17,000 years to read all of the data involved in the case.

"Our decision has to be based on firm evidence, let's take for example the impact; first we analyze studies that indicate there is a link. We also accounted for the possibility that there may be a reason the users click on certain topics. However, it was confirmed that the same results received significantly more when ranked higher up," she said.

"The investigation did not take place in isolation we had many exchanges with Google and customers and some of them were US companies. All of them were actively involved. Hundreds of companies took the time to reply to our questionnaire."

The EC said they will be progressing with two other pending enquiries about Google practices.

Seven other companies, including News Corp, Getty Images, Oracle and Yelp and News Media alliance, which is a newspaper conglomerate, accused Google of destroying jobs and stifling innovation.

"As US-based companies, we wish to go on record that enforcement action against Google is necessary and appropriate, not provincial," the firms said in the letter. "We have watched Google undermine competition in the United States and abroad," a statement from the companies read.

In response to Tuesday's EC decision, Google has come out fighting and said that they may consider appealing the fine.

"When you shop online, you want to find the products you're looking for quickly and easily, and advertisers want to promote those same products. That's why Google shows shopping ads, connecting our users with thousands of advertisers, large and small, in ways that are useful for both," a Google spokesperson said.

The European Commission's decision on online shopping: the other side of the story https://t.co/OMsf6wqnjn

"We respectfully disagree with the conclusions announced today [June 27]. We will review the Commission's decision in detail as we consider an appeal, and we look forward to continuing to make our case," the spokesperson added.