Denmark's ruling Liberal Party wants to penalize NGOs rescuing migrants and refugees trying to cross the Mediterranean by boat. While the Liberals' stance has been backed by fellow government parties and the EU border agency itself, it also triggered criticism from human rights organizations. 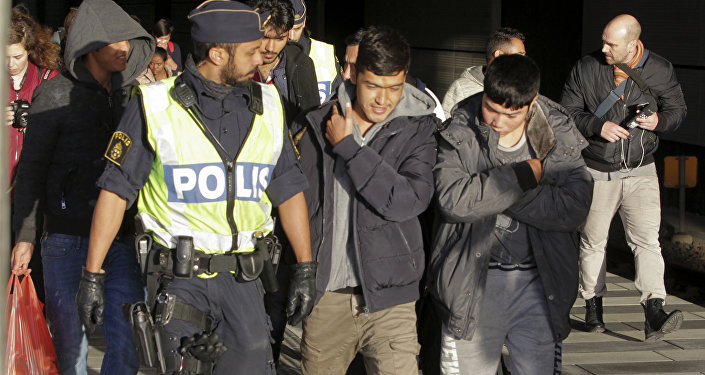 © AFP 2019 / Stig-Ake Jonsson
'Send Me Instead!' Swedes Volunteer to Replace Rejected Refugees
The Liberal Party wants to strip Danish aid funds from NGOs involuntarily contributing to the smuggling of people into Europe by saving migrants trying to cross the Mediterranean by boat.

Liberal immigration spokesman Marcus Knuth stressed the fact that the government follows the line set by the EU border agency Frontex, which also slammed NGOs for funding or taking part in rescue missions.

"I strongly agree with the criticism. Aid organizations create a greater incentive to undertake the dangerous journey across the Mediterranean Sea, and I look upon that gravely," Marcus Knuth told the Danish newspaper Berlingske. "So we should look at where these organizations get their funds from, and if it comes from Denmark, we should strongly reconsider continued support," he continued.

The criticism was supported by the Danish People's Party, as well as the Conservative Party.

At present, nine NGOs operate ships in the Mediterranean off the coast of Libya, which is the most popular route for migrants from Africa, the Middle East and Asia trying to reach Europe. Last year alone, 181,000 ventured upon the perilous crossing, with a record 5,000 drowning en route. This year, another 72,000 refugees and migrants arrived in Italy by sea, an increase of almost 28 percent compared with the same period last year. The NGOs claim to have saved about a third of them, yet were unable to prevent about 2,000 deaths.

Needless to say, Red Barnet was not enthusiastic by the Liberals' criticism, maintaining it was misplaced.

"There is no connection between our efforts and human trafficking. A number of studies have proved that," Jonas Keiding Lindholm of Red Barnet told Berlingske.

The Danish criticism was also condemned by the deputy directory of Human Rights Watch, Judith Sunderland.

"The logic of those who criticize rescue operations as a pull factor is that these groups should stop saving people and let them drown to deter others from coming," Judith Sunderland said, as quoted by the Danish newspaper Information.

"Migrant streams are coming from West Africa. They are almost just men hailing from countries such as Senegal, Nigeria, Côte d'Ivoire and Gambia. These are democracies with good economic growth. They have heard about Europe as a paradise and are seeking happiness and a better life," Erika Bjerström told SVT. "The big problem is that these young men are misinformed, as they are seeing Europe as a single cash machine," she continued, adding that 90 percent are economic migrants in search of a better life.

In related news, Finnish officials have recently intervened to prevent an aide to Labor Minister Jari Lindström from cutting funding to NGOs assisting immigrant children, including two Somali grassroots organizations. While the decision was reversed as "lacking rationale," the aide claimed to have followed orders instead of "flying solo."