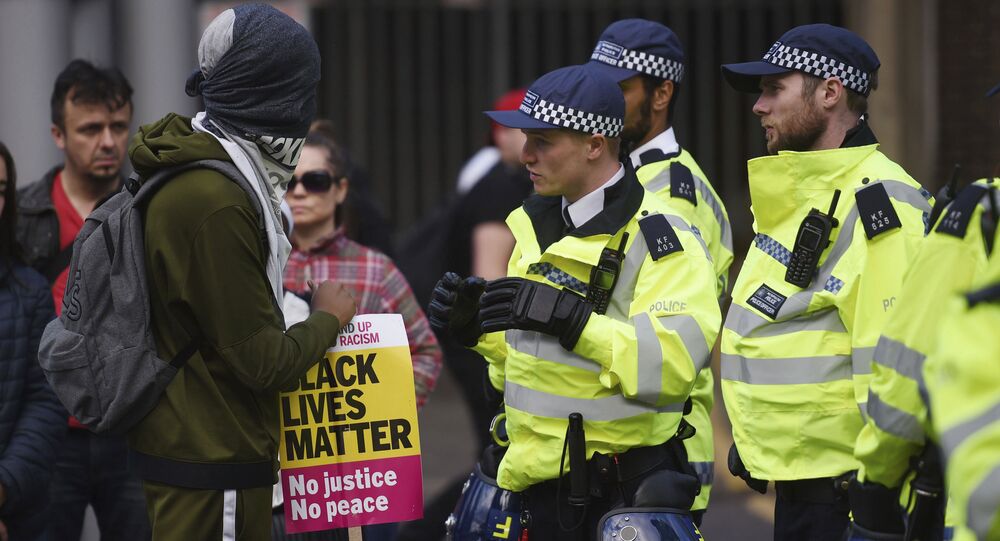 But after dark garbage was set alight outside nearby Forest Gate police station, bricks were thrown at police officers and the atmosphere became more sinister.

At one point an elderly Muslim man, who had just come from Eid celebrations, came up and hugged a young black demonstrator, told him he was sorry, and said he shared their struggle.

Old Muslim man calms tensions outside #ForestGate Police Station with #Justice4Edson protesters.
He is told theirs is a shared struggle pic.twitter.com/Mwy4SSBB80

The protesters have claimed the 25-year-old's death is being covered up.

Campaigners claimed he was "brutally beaten" by police and suffered a broken neck but the post-mortem revealed no signs of spinal injuries. Mr. Da Costa's family is reportedly seeking a fresh post-mortem by their own pathologist.

​Mr. Da Costa is a Portuguese national and his father, Ginario, reportedly told a Portuguese news agency that his friends saw him "fall to the ground and a policeman put a knee on his throat." Mr. Da Costa, who was known as Edson, was the father of a young son.

The hashtag #JusticeForEdson has become prominent on social media over the weekend.

Borough Commander Superintendent Ian Larnder tried to answer the protesters' questions at the protest on Sunday.

At one point a protester rode a motorcycle up to the police lines and revved his engine menacingly.

During the evening six police officers were injured, four of whom needed hospital treatment. A police sergeant suffered facial injuries and a constable received a head wound.

But the #JusticeForEdson campaigners said they had nothing to do with any violence and had intended only a peaceful march to highlight their concerns.

Police in London will be hoping there is no repeat of the violence on Monday night (June 26) and that the incident does not snowball like the death of Mark Duggan in 2011.

Duggan was shot dead by police in Tottenham and protests about his death led to huge riots across the capital and in other cities.

Earlier in June, Chief Constable of the West Midlands, Dave Thompson, said British police would face "real challenges" tackling a repeat of the 2011 riots in the light of savage police cuts they have undergone.

The Independent Police Complaints Commission (IPPC) posted a statement on its website on Friday (June 23) which said:

"Today we have contacted Mr. Da Costa's family to share with them the findings from the pathologist and we are now able to correct some misinformation that is being widely shared on social media. The preliminary post-mortem found that Mr. Da Costa did not suffer a broken neck, or any other spinal injury during his interaction with the police. It found he did not suffer a broken collarbone or bleeding to the brain. Rigorous investigations into the cause of Mr. Da Costa's death are continuing, including into the use of force."

The IPCC said: "We are releasing this information now out of concern at the rapid spread of false and potentially inflammatory information.

"Our robust and independent investigation will seek to explain the circumstances around Mr, Da Costa's death. In the meantime, false information could have very dangerous consequences, so please don't share it."