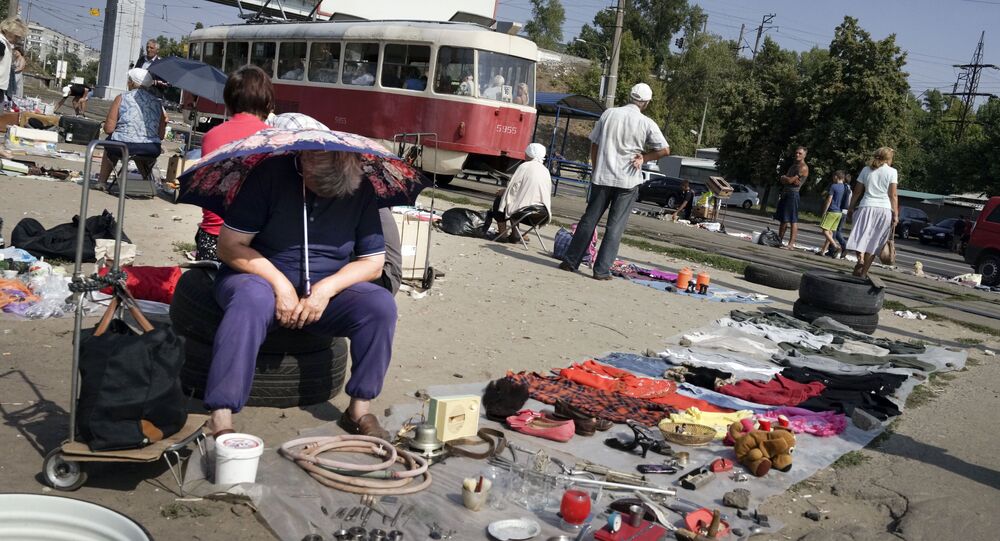 Former Ukrainian President Leonid Kuchma has lashed out against the EU, saying that the bloc's policies had brought Ukraine "to its knees," and turned it into a raw material colony. Speaking to Sputnik, Ukrainian political analyst Alexander Okhrimenko said that it was surprising that Kiev expected anything different from the Europeans.

Speaking at a forum in Kiev on Thursday, Kuchma, who served as independent Ukraine's second president between 1994 and early 2005, accented his speech with some unusually frank remarks about the nature of the relationship between Ukraine and the European Union.

The ex-president complained that the EU was "bringing [Ukraine] to its knees" with its trade policy, adding that Europe sees the country as a mere raw materials colony. Ukraine couldn't even sell Europe its foodstuffs, Kuchma said, given its extremely stringent system of quotas.

© Sputnik / Evgenia Novozhenina
Poroshenko's Claims on Ukraine Fully 'Independent From Russia' Shattered by Reality
In the meantime, Kuchma noted that the Europeans had forgotten about Ukraine, as evidenced by the lack of mention of the country in European media. Europe, the former president noted, was not providing the kind of real assistance required to help Ukraine back on its feet.

At the same time, Kuchma stressed that Ukraine's economy had found itself in a major crisis, with development grinding to a complete halt.

"We have completely forgotten about the economy," the former president said. "We are completely falling apart; there are no high technology sectors left; the rocketry, space, and aviation industries are gone…We are turning into a raw materials colony; all we have left is metallurgy, chemicals, agriculture. What direction are we headed in?"

According to Kuchma, Ukraine should have no illusions about receiving help from the EU, or the West in general. "Enough walking around the world, hat in hand," he said. "If we do not come to our senses and begin dealing with problems – if people don't believe the government, if we do not all pull in one direction, no forums will be able to help us; no one will do these things for us."

© Sputnik / I. Kropivnitskiy
Cold Rolled Facts: Ukraine No Longer Top-10 Steel Maker, Metallurgy Sector Dying
Commenting on Kuchma's remarks, Ukrainian political scientist Alexander Okhrimenko told Radio Sputnik that it was obvious that the EU wasn't going to help Ukraine; in fact, they were never under any obligation to do so.

"It's necessary to understand that the European Union is simply another competitor – whether to Ukraine, Russia or the United States," Okhrimenko stressed. "It can't be the case that European companies will be made to close down so that Ukrainian producers can sell something. This is business."

The observer emphasized that the much-talked about Association Agreement that Ukraine had signed with the EU was never destined to be any sort of miracle agreement; it was simply an opportunity for Ukrainian businesses to receive the right to work in the European market.