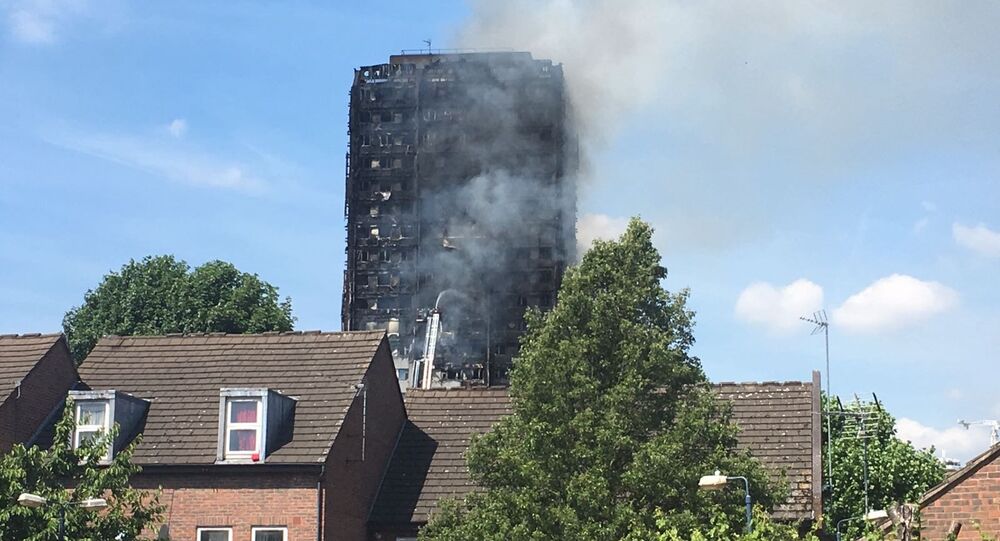 The fire in the Grenfell Tower, a high-rise apartment block in North Kensington, London, started on June 14 and quickly engulfed the entire edifice.

© REUTERS / Neil Hall
Up to 79 People Confirmed Dead or Missing in London Tower Block Fire - Police
MOSCOW, June 23 (Sputnik) — The Grenfell Tower fire in London is now confirmed to have started by a faulty refrigerator freezer in one of the apartments, London Metropolitan Police Detective Superintendent Fiona McCormack said on Friday, adding that nine people have now been both identified and confirmed dead by the police.

"We now have expert evidence that the fire was not started deliberately — the fire started in a fridge freezer — the make and model is a Hotpoint FF175BP. We are working with the Department for Business, Energy and Industrial Strategy who are talking to the manufacturer of the fridge freezer," the detective told reporters, adding that the model has not been subject to any product recall.

According to the police, the fire spread at an "unexpected" speed, which has prompted the need to investigate the construction of the building, including the insulation behind the composite tiles of the building.

"The number of people who have been confirmed as dead, and formally identified is now nine. I know that there has been concern and fear that those figures are a lot higher. We want to identify all those who died as result of the fire at Grenfell Tower and that is where I need the public's help," McCormack, who is in charge of overseeing the investigation into the fire, added.

Earlier in the week, the police said that the number of people missing and presumed dead in the fire was 79.

The fire in the Grenfell Tower, a high-rise apartment block in North Kensington, London, started on June 14 and quickly engulfed the entire edifice, trapping some 120 families inside. Shortly after the fire, protesters rallied in London, calling for full transparency of the investigation and number of people that lived in the building.

London’s Metropolitan Police are considering several criminal offenses in connection with the Grenfell Tower fire, including manslaughter, and are scrutinizing all companies involved in construction or maintenance of the building, Detective Superintendent Fiona McCormack said Friday.

"We are looking at every criminal offense from manslaughter onwards, we are looking at every health and safety and fire safety offenses and we are reviewing every company at the moment involved in the building and refurbishment of Grenfell Tower," McCormack told journalists in a statement.

McCormack detailed out the specific tests that the police conducted while looking into the safety of the building’s construction materials.

"Preliminary tests on the insulation samples collected from Grenfell Tower showed that they combusted soon after the test started. The initial test on the cladding tiles also failed the safety tests," the detective superintendent said.

McCormack affirmed the police counted 79 people as being presumed to be dead, with nine lifeless bodies already formally identified, but noted that she personally feared there were more.

She pleaded with those who knew the exact individuals that were in the building to contact the police, specifying that neither the Home Office nor the police would be interrogated those people’s immigration status.