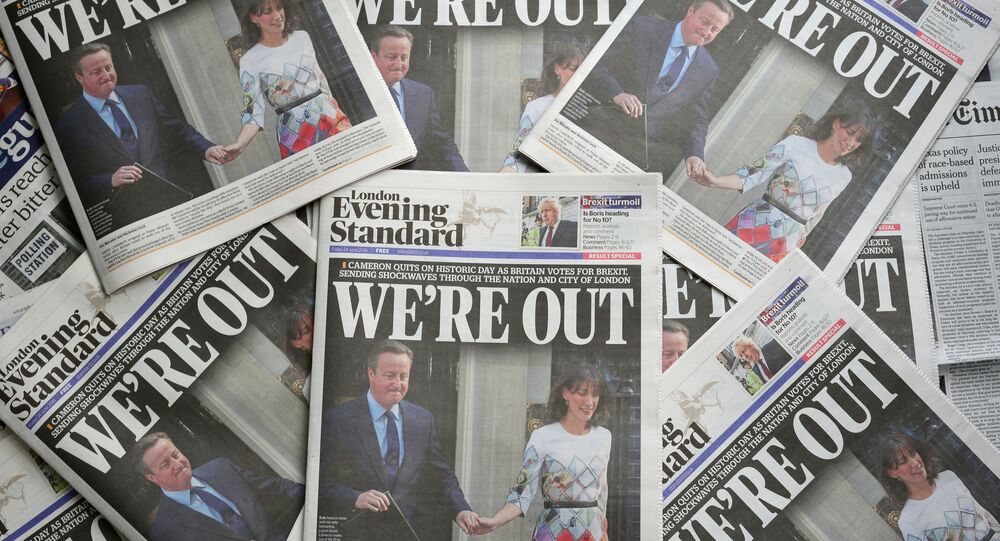 How Did We Get Here? Brexit One Year on From the June 23 Referendum

On June 19, official negotiations on the UK's secession from the European Union finally commenced. June 23 marks a full year since the referendum's shock result, in which 52 percent of UK voters opted to depart the bloc, ending the country's 44-year membership with the bloc.

While negotiations are expected to be protracted, terminating in October 2018 at the earliest, resulting in a likely exit date of March 2019, the result has already had seismic implications for the UK in many areas.

The impact of the referendum has arguably been felt most palpably in the country's finances — national, commercial and individual. Sterling, once one of the world's strongest currencies, fell significantly June 24, and after 12 months it remains down 15 percent against the US dollar, and 14 percent against the euro, its lowest level in 30 years. HSBC analysts believe it likely the pound will hit parity with the euro before the end of 2017, a development almost universally considered unthinkable prior to the referendum.

Notoriously, many popular consumer products have been subject to "shrinkflation" — an item reducing in size but its cost remaining the same. For instance, Maltesers sharing bags were 121 grams prior to the plebiscite, but have since fallen to a paltry 103g. Family packs of Fish Fingers have likewise been reduced from 12 to 10 fingers per box.

​While export-focused UK companies have benefited from the drop — and pricier imports have compelled Britons to eschew more expensive foreign goods in favor of "buying British" — it has critically impacted the spending power of Brit holidaymakers — and put further pressure on consumer finances by pushing inflation to a four-year high of 2.9 percent. Bank balances of every kind have thus been big losers, with inflation and record-low interest rates collaborating to clobber savers.

Wages are likewise suffering from the Brexit effect — while nominal average incomes grew by 2.4 percent in annual terms the first quarter of 2017, when considered in tandem with inflation figures, wages are actually falling in real terms, with growth scheduled to hit negative in 2017 for the first time since 2014. This bodes yet more ominously for consumer spending, the key driver of UK economic growth since the 2008/9 financial crisis.

​​Nonetheless, in the wake of the Brexit vote, many economists cautioned the UK would suffer a catastrophic economic shock and be catapulted into recession by the result — predictions which have not come to pass.

Many economists have expressed surprise at how well the UK economy has in fact held up, although much of this has been driven by monetary easing policies pursued by the Bank of England since August 2016. There are signs these stimulus measures are running out of steam, however. In May, it was revealed the UK is the worst-performing G7 nation in 2017-06-23.

In its annual report on immigration to the UK, published February, the Office for National Statistics (ONS) noted that in the three months following the referendum, migrants from many European countries living in the UK fled the country. In particular the number of Eastern Europeans leaving the UK rose by almost a third, to 39,000.

Also that month, it was revealed the UK government had rejected around 30 percent of applications from EU for permanent residency since the referendum. The shortage of EU workers is felt most palpably in sectors such as accountancy, cleaning and computing.

Concerns over the strength of the UK's hand in Brexit negotiations prompted Prime Minister Theresa May to call a snap general election June 8. However, her gamble backfired, and the Conservatives lost their governing majority.

Despite the prominence of Brexit in the leadup to the election, during the campaign itself, the issue took a backseat — ​only the Liberal Democrats placed it at the core of their electioneering efforts, pledging to hold another referendum on the subject in the hope secession could be blocked. This singular focus had negligible impact on their standing in the polls, and in the election itself the party gained a mere four seats — while losing Sheffield Hallam, the constituency of former leader Nick Clegg, one of the most impassioned anti-Brexit voices in the party.

Brexit shoved UK GDP growth to the bottom of the table. Greece is growing faster than UK now. #BrexitAnniversary pic.twitter.com/3tV5mOmiul

​Nonetheless, many — including Gina Miller, the campaigner who raised hundreds of thousands to support pro-European candidates in the general election — believe Brexit played a pivotal role in the election result, with May's approach being crucial in denying her party a majority.

"Brexit was uppermost in many voters' minds. For a lot of [young voters], it was a one issue campaign. This is a clear rejection of the government's Hard Brexit strategy. The result might mean it's not just the Tories negotiating Brexit. I've long said the best way to negotiate our withdrawal would be via an all-party committee, including representatives from parties in every region of the UK. This is such a big issue, it can't just be the Conservatives at the table," Ms. Miller previously told Sputnik.

© REUTERS / Yves Herman
'Clear Rejection': Why May's Silence on Brexit May Have Cost Her the Election

Furthermore, it has been suggested Brexit makes a reunified Ireland a very real possibility. Brussels is opposed to a physical border between the "two" Irelands, and has published guidelines making clear member state governments have committed themselves to allowing Northern Ireland to rejoin the EU under the auspices of a united Ireland — without conditions or negotiations. Brexit could resolve the impasse on Irish reunification which has existed ever since the Republic of Ireland became independent from the UK.

Much could happen between June 2017 and March 2019 to amend the UK's political landscape — another general election seems likely before then, and huge question marks hover over the tenability of May's premiership.

On another general election this autumn:

​Moreover, many key elections are scheduled elsewhere in Europe. Many developments could alter Brexit's path — but the process will not be derailed outright, unless the UK opts to revoke its divorce application. If the country's economic and political situation worsens to an even greater degree, such a possibility becomes increasingly likely.