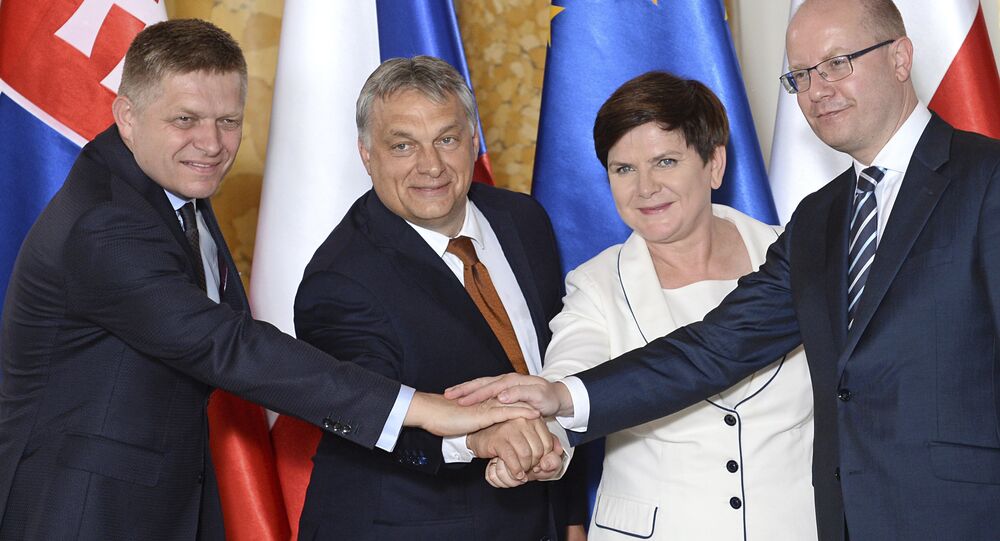 Political analyst Vladimir Ardaev outlines why, over a decade after joining Western institutions including the European Union and NATO, the countries of Central and Eastern Europe continue to rebel against their Western partners' directives on the refugee issue.

On Tuesday, Warsaw's Royal Castle hosted the summit of the Visegrad Four (V4) group of countries, with the prime ministers of Poland, Hungary, Slovakia, and the Czech Republic in attendance for the ceremonial handoff of the V4 presidency from Poland to Hungary.

A novelty of this year's summit was that V4 leaders were joined by the leaders of the Netherlands, Belgium and Luxembourg – three of the EU's oldest and most respected members.

Together, the V4 and Benelux leaders discussed the consequences of Brexit, the refugee crisis, relations with Russia and the need to reform the EU. Observers took note of the fact that in spite of the historic nature of this inter-EU 'East-West' mini-summit, no major decisions were made or agreements signed, with the meeting ending following a formal exchange of views.

In fact, veteran RIA Novosti political observer Vladimir Ardaev wrote that the V4 summit not only failed to make a much-needed breakthrough over the differences between the Central and Eastern European countries and Brussels, but may have only exacerbated them as well.

© CC BY-SA 2.0 / mw238 / Presidential palace in Warsaw
Create and Rule: What's Behind Poland's Idea for a Central-European Federation
Founded in 1991, the V4's formal aims include cultural, political, military, economic and energy cooperation. In 2004, when its four member countries were admitted into the EU, the association gained a new importance –helping to ease the former Eastern Bloc states' process of European integration.

On the eve of Tuesday's summit, V4 members Poland, Hungary and the Czech Republic were facing a serious problem with Brussels. Namely, just days earlier, the European Commission opened sanctions procedures against the three countries for their non-compliance with EU legislation on refugee quotas.

The Czechs had taken in just 12 refugees from the quota of 2,600 which Brussels had given them. According to the country's Ministry of Internal Affairs, Prague has no plans to take in any more up to the end of the year, even though the EC's deadline runs out in September. Hungary and Poland reacted in a similar fashion, rejecting Brussels' quotas and defying the European Commission's threat of sanctions. If implemented, the sanctions may mean a reduction to the countries' grant funding, as well as fines.

Only incensed further by Brussels' warnings, V4 members have so far refused to back down. Czech President Milos Zeman accused Brussels of the "manipulation of [Czech] statehood." Hungarian Prime Minister Viktor Orban went further, suggesting that Brussels bureaucrats were "openly on the side of terrorists". On Monday, Polish Prime Minister Beata Szydlo said that the recent wave of terror attacks in Europe was caused by an irresponsible migration policy. Budapest has declared that it is starting legal procedures against Brussels, with Warsaw saying it intends to do the same.

At Tuesday's V4 summit, migration was one of the main topics on the agenda, and turned out to be the main point of contention between the V4 members and their Benelux guests. President Orban outlined a difference in approach taken by Western European and Central and Eastern European countries. "We have differing approaches to migration policy. There are states which have said they did not want to change the national composition of their countries. Other countries, living in a more heterogeneous reality, advocated a different position," he said.

Shortly after the summit's final press conference, Orban went further, saying that "it will be difficult for the countries of the EU to reach a common position" on immigration. "We can agree on some particular elements. But I doubt whether we can ever develop a common migration policy," he stressed.

© AFP 2021 / LOUISA GOULIAMAKI
Hungarian PM Casts Doubt Over EU's Ability to Create 'Common Migration Policy'
According to Vladimir Ardaev, Tuesday's expanded format V4 summit, and the continued disagreement between East and West on the refugee issue, served to demonstrate a sense of retrenchment, and what appear to be increasingly irreconcilable differences between Brussels and the EU's eastern member states. In fact, the analyst suggested that "the Warsaw summit very eloquently characterizes the state of the EU as a whole today. Disagreements on a problem as acute as the migrant crisis, and the contradictions it causes…are too obvious and are becoming more and more irreconcilable."

Therefore, the analyst noted that "the hope that the meeting of the EU's 'old-timer' member states and its 'young whippersnapper' partners could lead to a consensus on all positions was in principle untenable. Then again, Prime Minister Szydlo, the summit's organizer, had no illusions in this regard. In her words, the important thing was to 'raise dialogue to a new level' – that is, from the level of foreign ministers to the level of heads of government."

On that front, Ardaev noted, Tuesday's negotiations could be seen as a qualified success. "Participants even said that this was the beginning of a new format on negotiations within the framework of the EU."

Now, the question seems to be whether the V4 will be able to continue to use their newfound negotiating platform, perhaps as a way to try negotiate a way out of its members' squabble with Brussels on the refugee issue.