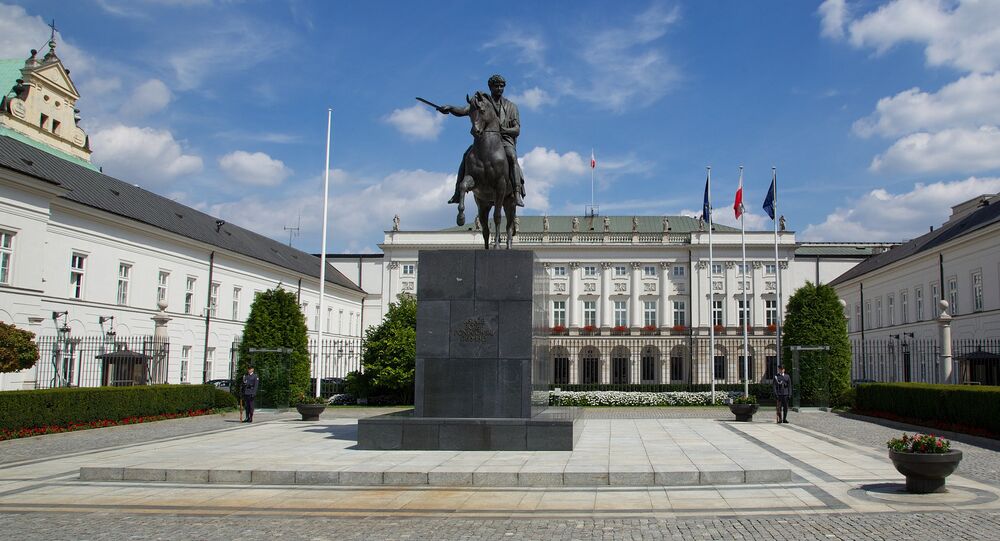 On July 6-7, Warsaw is set to host the Three Seas Initiative Summit of Central and Eastern European nations, which will be attended by US President Trump. However, Prague has supposedly refused to attend the meeting. Sputnik Polska talked to Polish political analyst Adam Wielomski to find out what might have triggered Prague's objections.

The decision to move the meeting to the Polish capital from the country's southwestern city of Wroclaw was made for "logistical and security reasons" after the White House confirmed that President Trump, who was invited to the Summit, will visit Poland and attend the gathering on July 6, before joining the Group of 20 summit in Hamburg, Germany (July 7-8).

According to the White House, Trump "will attend the Three Seas Initiative Summit to demonstrate our strong ties to Central Europe."

The main aim of the Three Seas initiative is to raise the region's standing in Europe, but also to make it attractive as an economic partner for the US.

© Photo : Pixabay
European Politicians in Panic Mode to Change EU Amid Growing Euroskepticism
However, the Polish newspaper Gazeta Wyborcza recently cited one Czech diplomat who said that Prague refuses to participate in the Three Seas event. One of its arguments is that it considers the Three Seas initiative unacceptable, as it is a concept of the last century, which very closely reminds the great-power "concept of Pilsudski."

Sputnik Polska sat down with Adam Wielomski, a Polish political science professor and deputy editor in chief of the political portal Konservwatyzm.pl to talk about what the "concept of Pilsudski" actually was and what might have triggered Prague's objections.

The "concept of Pilsudski" was a plan pursued by Polish leader Jozef Piłsudski. He was Chief of State (1918–22), "First Marshal of Poland" (from 1920), and de facto leader (1926–35) of the Second Polish Republic as Minister of Military Affairs.

He pursued his plan, known in English as Intermarium, following the end of World War I, with the intention of creating a federation of Central and Eastern European countries. Invited to join the proposed federation were the Baltic States (Lithuania, Latvia, Estonia, Finland), Belarus, Ukraine, Hungary, Romania, Yugoslavia and Czechoslovakia.

© Photo : Craft37by
A map of the Kingdom of Poland and Grand Dutchy of Lithuania including Samogitia and Curland, divided according to their dismemberments, with the Kingdom of Prussia. (with) Warszawa, Warsaw. By Willm. Faden, Geographer to the King, M DCC XCIX. London, published by W. Faden, Geographer to the King & to H.R.H. the Prince of Wales, Charing Cross, April 2d, 1799. 2d edition

The proposed federation was meant to emulate the Polish-Lithuanian Commonwealth, stretching from the Baltic Sea to the Black Sea, that, from the end of the 16th century to the end of the 18th, had united the Kingdom of Poland and the Grand Duchy of Lithuania.

Adam Wielomski explained that the concept initially suggested that Poland would de facto become the guiding force of this project. Hence it could not and did not eventually get any due support because in that interbella period it was perceived as manifestation of Polish imperialism, which actually corresponded to reality.

"I think that everyone who knows the history of Poland and Polish political thought sees the same thing when they look at the Three Seas Initiative: Poland strives to create a federation under its informal authority. It triggered alarm among the Czechs, who took the idea very skeptically," the political scientist said.

© REUTERS / Kacper Pempel
European Union 'Living Through the Worst Crisis Since the Cold War'
He also commented on the attendance of Donald Trump and whether it might mean the support of Duda's governing Law and Justice party and the initiative to forge a Central and Eastern European union.

"Frankly speaking, I am not sure what Donald Trump is going to say during his visit to Poland. Whether he is going to give a "green light" to the Three Seas Initiative or not. I won't try to predict anything. It is an innovative idea to create an alternative center of power against Russia on the one hand, and Germany – on the other," Wielomski said.

However he further explained that the countries which are supposed to join this federation are firstly, relatively weak economically, and secondly, are being torn apart internally and have historic conflicts among each other.

Adam Wielomski also pointed out the weak aspects of the project. There are three of them: first, it is weak economically. All these countries, to the larger or the lesser degree, depend on Western Europe. Frankly speaking, all of them are just constituents of the German economy.  They are simply unable to exist without Germany, as Germany is their main export market.

© AP Photo / Martin Meissner
Many Europeans Believe Germany Has Too Much Influence Within EU - Poll
Secondly, the project is weak politically, as there are no common interests between these states. Some of them are cautious of the German threat and don't see Russia as a problem, and others – vice versa. The project lacks internal unity. The US should invest a lot into this structure in order to give it some shape.

And thirdly, one should question whether this project will become truly American or it will remain just a project of one president – Donald Trump.

The political analyst noted that this idea has been circulating in Poland for several decades; however it had not found the support of any US administration.

If this project is going to be implemented solely with the support of Donald Trump, he said, it is doomed to exist only while Trump is president. Unfortunately, he can't stay in power forever. There is no doubt that if the next president is a Democrat like Hillary Clinton, the project won't get any support.

Hillary Clinton wants to cooperate with Europe and sees Germany as its major partner and not some confederation of weak Central and Eastern European states. This is the sorest spot of this construction – it is not set up for decades but rather for one, maximum two presidential terms in the US.

© Sputnik
Why the Road to European Unity, Prosperity Goes Through Moscow
Besides, he said, the countries of the Three Seas Initiative pursue different interests. The Czech Republic, for example, stands closer to Germany and Western Europe than to Eastern Europe. The only issue which currently unites it with Poland is its unwillingness to host refugees. But it is not enough to set up a bloc.

Hungary, in turn, keeps maneuvering between Berlin and Moscow, trying to maintain good relationship with both, while Warsaw does not long for good ties with either one. Besides, Ukraine and the Baltic States, which are also part of the project, are very cautious about Poland becoming a potential hegemon, the political analyst concluded.